I’ve now had a failed back up twice. First time was to a USB stick and second time to the same NAS drive as my music is stored on. 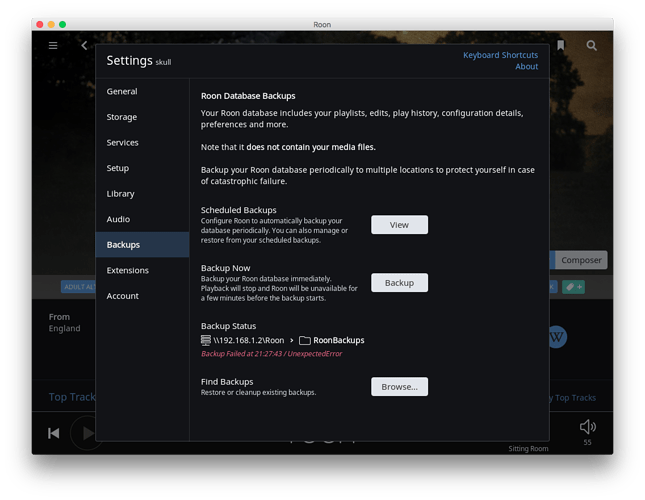 This happened to me once after playing a music while backing up. I ran it again without playing anything and it backed up fine.

Need music was being played either time I tried it.
Let’s see whether it backs up at the next scheduled time.

Is anyone else receiving a message that the scheduled auto backup has failed?

It doesn’t seem to provide any info why.

I have it programmed to backup to a folder on the NAS that contains my music files. The core itself is on a sonic transporter i5.

I did the first night… My auto backup was set for 2am and I think it was because Roon may of been in use at that time. Yesterday I changed that to 4am and last night it did the backup.

I wonder if the auto backup is prevented by Roon steaming through the night doing analysis of tracks… (it still is less than half way through that project! But apparently plain sailing…).

Unless it’s been changed by the developers, when you have a scheduled backup set, music must be stopped for at least 10 minutes in order for the backup to proceed.

The thought on this was if you are having a party and the backup is scheduled for 2am and your music stops at 1:59, you don’t want the backup to hold up starting more music at 2am.

If your scheduled backup is missed, it will just try again the next day.

That makes perfect sense. But will it backup while also undertaking the mammoth initial analysis of all files?

I’ve not been able to backup to a Synology NAS, it won’t let me create a RoonBackups folder and instead creates an infinitie number of files/folders in the root directory.

…will back up to Dropbox set for 3 AM…I have to leave the computer switched on right…or just shutdown as I normally do and Roon will start computer do back up and switch off?? Thanks.

Yes, your Roon core needs to be running for the backup.

Be aware, your Roon Library folder contains thousands of files, which will mean the initial Dropbox backup will take a long time.

You will be able to play music after the initial snapshot, and the backup will continue in the background.

I think we need @support to figure out why RoonBackups folder isn’t created.

That’s a good question, I’m not sure how the backup works while Analysis is occurring. @support

I just wanted to re-iterate @Greg comment about the time for the initial Dropbox backup. Yes you have to leave your computer and Roon on, and no Roon will not wake your computer. That being said, a modest 900 MB database of about 600 albums took over 6 hours to backup to Dropbox.

Mine is taking a very long time to backup to Dropbox initially as well. It’s now making sense though…initially I was thinking it would backup to the Dropbox folders locally (relatively quickly) and then Dropbox would take a while to sync the files. Then I remembered the Dropbox authentication settings in Roon and the API authorization so now my assumption is Roon is making calls to Dropbox directly and waiting for the files to transfer which would account for the looooong duration. Which makes sense…that’s a better design and wouldn’t require Dropbox installation on the Core machine.

That is correct, and given that the backup consists of hundreds if not thousands of small files, well, that equals time.

Hi @fritzg – Apologies for the troubles and thank you for the feedback. I’d like to get a look at some logs from this failure.

Please reproduce this behavior that you’ve noted and then may I kindly ask you to please zip up a foldersof logs for me, and upload them to Dropbox (or similar)? You can just post the links in this thread.

The folders I need is:

If you can zip those up and send me a Dropbox link, we’ll look into this. Alternatively, if you don’t have Dropbox, let us know and someone from @support will send you information about uploading the logs directly to us.