1.3 - scanning at ~6 files per hour (WAS: Rescanning/Analysing causes spinning wheel in the top right)

As upgraded to 1.3 from 1.2, left the housekeeping work continue through the evening.

Checked in this morning, and the spinning wheel had stopped, at least when i was looking at it, and the

, have all looked to be processed.

The Analyzing continues however, which i would expect.

But this spinning wheel returned sometime shortly after, and ever since continues to spin.

By clicking on the spinning wheel brings up a display that seem to indicate nothing is progressing from the information displayed.

So, is this usual (short of not analyzing the logs), and is indicative of continued background tasks, that is not related to ongoing Analyzing?

I recall the main window spinning wheel is disconnect from the Analyzing activity. 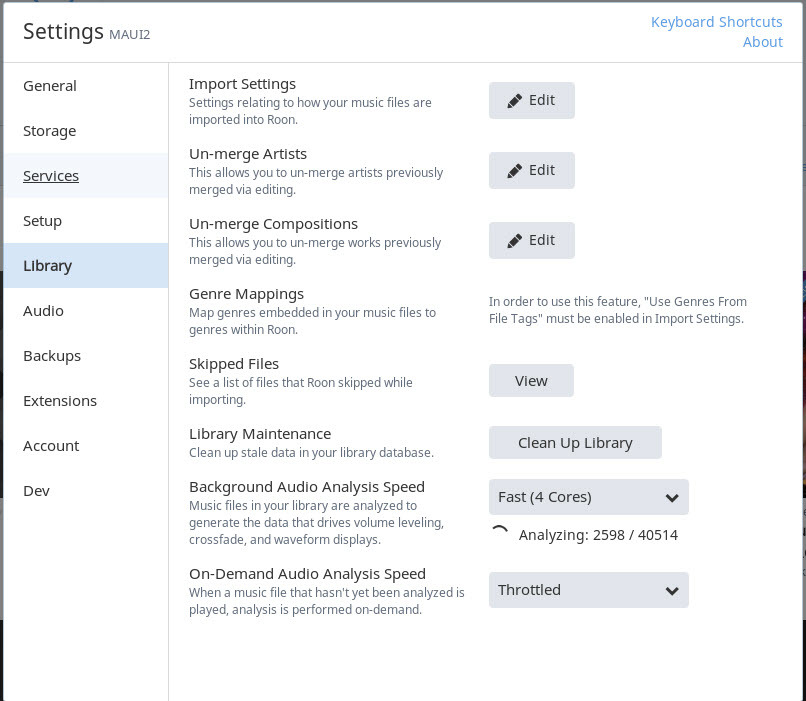 By clicking on the spinning wheel brings up a display that seem to indicate nothing is progressing from the information displayed.

I’m assuming this scanning is to continue until well, scan is complete.

But i just don’t recall the scan taking this longer with 1.2 version.

The scanning of 1.3 is longer than it was in 1.2 due to the heavier audio analysis.

The scanning of 1.3 is longer than it was in 1.2 due to the heavier audio analysis.

For my knowledge sake, when you say “audio analysis” is that referring to the Analyzing still going on (which is at 4660 / 40514)?

In other words, the scanning in 1.3 is impacted by the heavier audio analysis that is still going on?

OR, “audio analysis” in scanning is separate from the Analyzing shown in Settings | Library page?

Asking this since, in 1.2, i seem to recall scanning had mind of its own, separate from Analyzing. But perhaps i’m mistaken.

That is, i don’t recall seeing the spinning wheel in 1.2, that is coupled with ongoing Analyzing shown.

For my knowledge sake, when you say “audio analysis” is that referring to the Analyzing still going on (which is at 4660 / 40514)?

Yes, that portion is running the new, more cpu intensive, audio analysis that is generating both the waveform and the R128 volume leveling and the LU dynamic Range number.

Yes, that portion is running the new, more cpu intensive, audio analysis that is generating both the waveform and the R128 volume leveling and the LU dynamic Range number.

Sounds like until my current Analyzing finishes, the scanning will continued to be affected by it.

By the way, if you know, or anyone else, this PC has dual CPU’s each with 4 cores.

I do see 8 cores though.

Haven’t tried it yet, perhaps i should.

But would 8 cores be useful across dual cpu affinity, totaling 8 cores?

Well, just changed it to 8 cores, and will leave it there (from 4 cores previously).

Haven’t noticed any immediate increase in cpu usages, and such. Perhaps will come later.

Well, in my analysis, I left it at 4 cores. My i7 is a quad core so the other 4 or virtual cores for hyperthreading. I did not notice much performance gain by going above the physical core count.

actual speed, though, is not dramatically faster

Okay, i’m leaving at 8 cores, across two cpu’s, though my eyeball subjective analysis shows the audio analysis seems to be going relative faster than previously at 4 cores.

The CPU Usage as seen from Windows Task Manager varies, but median seems to be at ~40%, but fluctuating, as high as i’ve seen hitting ~60%.

Perhaps by the end of the weekend, will be done. We shall see.

One time hit, overhead to greater goods to come from 1.3 update.

I’m assuming this scanning is to continue until well, scan is complete.

And it’s done, at least no more spinning wheel (for now).

And the audio analysis continues,

And it’s done, at least no more spinning wheel (for now).

Oh well, looks like will keep this up until the current audio analysis completes, i think which is at,

I’ve read in other threads people successfully solving it with temporary selecting less cores for the audio analysis, so the scan can finish. When the scans are finishes the audio analysis can use more cores again.

So, i’ll let the audio analysis to finish.

But you are right, the scanning is really crawling amid (quicker) audio analysis given the 8 cores setting.

I did see that 194 is on deck to update to, but for now reading the release notes, i would prefer to say at 1.3, and let the analyzing and scanning to finish.

I have few new music materials to add that i would prefer to do so after 1.3 housekeeping is done and db in consistent, quiesced state. 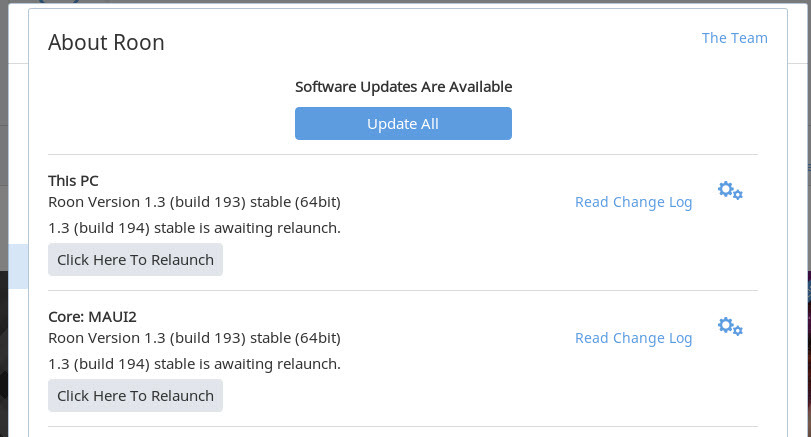 FYI, my topology, environment is described in this thread original post,

It looks it is all churning forward, maybe not with the speed you want, but it is a lot of analysis too.

Let it finish the analysis and the scan. When that is done you have the best situation to safely upgrade all to the latest version.

Keep us posted here until everything is set perfectly for you 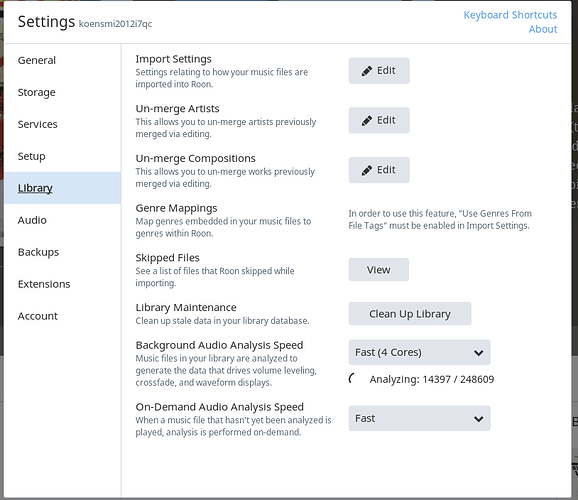 This way, it will take WEEKS before Roon has analyzed my library. Fast analysis speed, using 4 cores on a dedicated Mac Mini i7 Quad Core with SSD and 10 GB RAM. No DSP Engine or other 1.3 features for me – if I try it my Mac goes berzerk and skips each song. Average 0f 413 % CPU for analysis only (rescanning appears to have finished), so I guess I have to wait a few more weeks before my 1.3. is “released”. Sorry about the frustration quite apparent from my post, but cannot help but being underwhelmed and frustrated…

The Analysis is a Dynamic Range analysis based on R128…and this process will take a long time…especially for a library containing 250,000 tracks…there’s just no way around it…and it will be a useful tool for those who wish to implement Volume Levelling, which is another feature high on many users’ wish list for v1.3

Summary: Turn off Analysis while you want to listen to music…and turn it back on overnight and when at work etc…and the process will happen reasonably quickly…without it interfering with music replay…and will still allow you to play around with the new DSP and Minimum Phase options in v1.3

Thanks @Ronnie, good advice (again) that I will follow the next few days. Didn’t know about the hyperthreading / 8 core possiblity for example.

@Ronnie, even when I turn everything off as you suggested, and Roons finished rescanning, the spinning wheel keeps spinning. What is Roon doing in the background, impacting the performance of my Mac? For instance, when I try upsampling to DSD256, Roon hangs and skips each track (processing speed: below 1 – 0.7 or even lower). DSD128 is the max I can currently achieve over ethernet. Is Roon scanning my artwork, or…? I made this screendump five minutes ago, but Roon is still at 371237 Files Scanned. 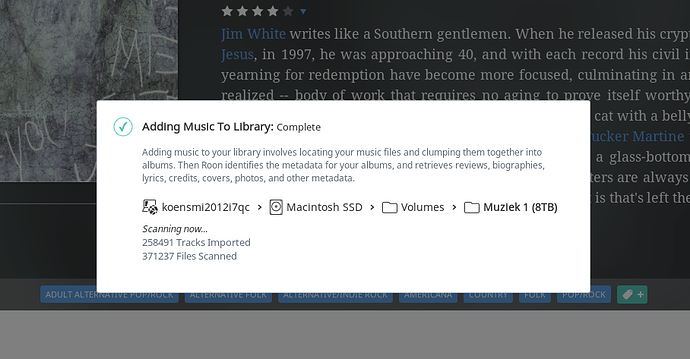 There are a lot of substantial new features within v1.3…and in order to make these available, Roon needs to rescan / reimport all the files in your Library…and this is simply a long-winded [and therefore frustrating] experience, until it gets completed…and this is not helped by your large library

Also, did you change that 2Gb RAM module for an 8Gb…bring your machine up to 16Gb from its current 10Gb??