1.8 has introduced several changes to the way box-sets are now handled. The most important is “focus”. For those of us with meticulous Classical tags (alas not myself) and a habit of navigating on a composition-by-composition rather than disk-by-disk basis (again, alas not myself) this is probably an advance. For those of us who have patchy tags and prefer to navigate a box set on a disc-by-disk basis, 1.8 doesn’t offer very much. 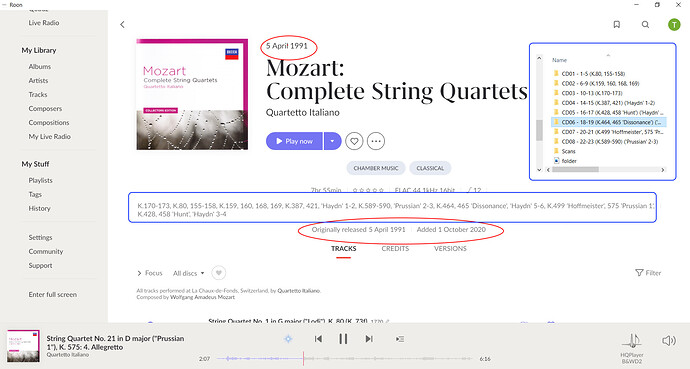 These Mozart quartets were recorded between 1967-1973, more than half a century a go, for example. In what looks like a regression error, this information is lost from the 1.8 screen. The dates will tell me that “A” has probably been tuned differently to a modern recording, the recording is not up to modern production standards, and if it is live everyone is coughing their guts up from cigarette smoke. That’s important if I am trying to achieve a listening experience (maybe but not necessarily with a playlist) that is consistent in terms of quality of the recording, tuning and mood. In any case, the original release date and release date are also being mixed up. Why? Can the regression errors on the dates be fixed please? 1.8 is not an advance on 1.7 as far as date handling is concerned.

Second. I don’t browse a box-set on a “composition-by-composition” basis anyway. I browse on a “disk-by-disk” basis. I suspect many do. So generally when browsing a box-set I will go for the disk with a mix of things I would like to listen to and play the whole disk. So I wouldn’t invest the manual effort to get focus working properly for a Classical box-set in any case. The value to me of the manual tagging effort is roon’s ability to squirrel out hidden compositions in box-sets more indirectly in the discovery, recommendation and radio tools. Then I notice a worthwhile improvement in my listening experience. But that is a completely different use case to the “groomers” who probably like “focus” and find that with a meticulously groomed local library they are getting a worthwhile benefit.

But there is something new in 1.8, the rest of us could potentially use. I can see listed out on this view are my disk labels. But what purpose do they serve?

This is a curious piece of half-finished functionality. I see the value if you want to navigate on a disk by disk basis. Better, by far, would be the individual album art but it’s better than nothing. I can imagine labelling 20 or 30 disks but not tagging potentially several hundred compositions. But why is it half-finished like this? I would be interested in roon’s response on this. Is it a pointer to new functionality in a future release?

That’s something that puzzles me, too. I don’t seem to find original released date and release date on the same screen. I have several albums where I tagged ORIGINALRELEASEDATE and DATE and I only seem to see the older date of the two.

However, I’ve not yet encountered that strange string that you had highlighted in blue. Do you have the version settings set like this?

I have all of those switches set to “yes”.

Normally what I do is I label the folders something other than CD1, CD2 etc. so that roon doesn’t make a box. In this particular case there are several out of print albums so there is no individual match and/or there would be a lot of mucking about because roon gets confused where there are multiple/alternative K numbers and will miss-identify a surprising number of Mozart compositions. There are only 8 CDs and I actually had no complaints with the old 1.7 solution up to about 10 CDs. So when I realised it was just going to be too much work to split the box-set properly I just merged the disks back into a single box-set but didn’t re-edit the disk labels. Roon made a perfect match to the box-set I seem to remember. But whilst doing it roon also picked up my folder labels.

I don’t now which switch is causing this. I suspect it is the “file path” one.

The thing is that I often find this with roon. The basic functionality is already there hiding in the shadows. It just needs to be re-purposed. So in this example it looks like the versioning logic could in some way be repurposed for a much better box-set solution. I’m sure there is more to it, but the basics seem to be already there.

I see what you hope for but in 1.7 we had the “Disc 1”, “Disc 2”, … labels to navigate to discs. They took a lot of space and clutter for box sets > 50 discs maybe even less. As I see it, Roon labs polished the UI with 1.8 and replaced this clutter with a drop down selector. I doubt that they are willing to go the same old way with some labels now.

Note: The feature is called Album label. In the case of box sets, the box set is the album. The/all the label(s) belong to the album. It can come from a file tag too. So theoretically each track could contain a different label. There is currently (by definition and naming) only support for album labels. If more than one label, no matter how it got defined (see Album version settings), is present they get all listet as shown above. Looks like its up to the users to clean-up the clutter if unwanted.

PS: As I already mentioned in the past, there’s no clear definition for the different album version settings. Pure try and error here.

As I see it, Roon labs polished the UI with 1.8 and replaced this clutter with a drop down selector.

I don’t want to believe that is roon’s end-game for box-set handling. Surely not? Sweeping the mess under the carpet so you cannot see it, is not a solution.

Also there is no recording date. 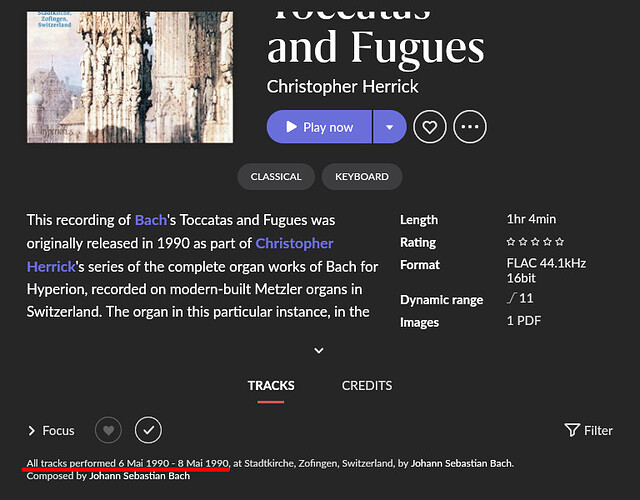 Still there - of course only when there is one for the whole Album. Else one has to look at the composition (performance actually):

I don’t know for sure, but if my memory serves me well it was the same with 1.7.

One of the issues is that you no longer see Orig Release Date, Release Date neatly listed. Its also the sorting logic that appears to be broken in 1.8

I had summarized the issue as attached. Do you also see this?

There are quite a number of recordings where the exact recording date is not known resp. not documented. Or in other cases it is just not tagged / provided by the metadata source. In Roon 1.7, the following logic was applied when sorting Albums by Recording Date: When recording date is filled, use that, if not, use “Original Release Date”, if that is empty, use “Release date”. That was making a lot of sense as albums where meaningfully sorted with release date as approximation for recording …

I don’t even know where to do that. Only “Sort by recording date” options I was able to find is for Performances - not for Albums. Maybe that’s why you got no reply (they still try to figure out what you’re talking about)?

A screenshot would probably be helpful to understand the issue. I try: [grafik] There is currently the same date shown twice. I would expect to see the “Release date” on top. The “Original release date” is shown on the bottom and named accordingly. This looks like a possible bug to me, because I can’t see a reason for the current redundancy in the dates displayed. Both dates are know to Roon for this album: [grafik] I also made sure that Settings|General > “Album dates for sorting” is set t…

Something has changed. So I am starting to see recording dates: 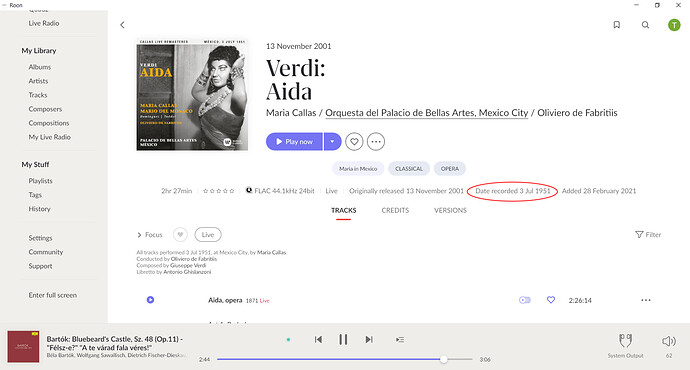 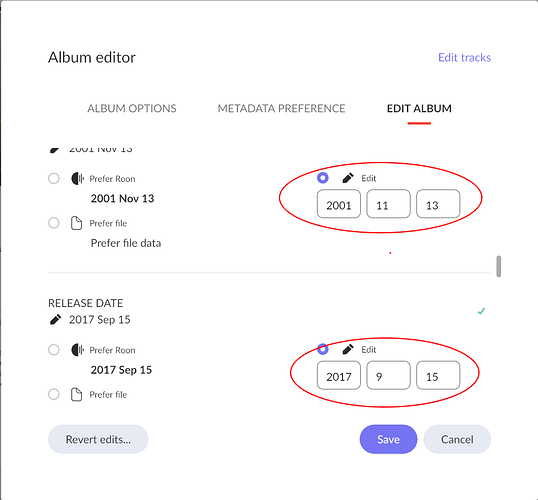 The original release date is a Myto transfer, whilst the release date should be the Warners transfer. Side by side they are very different. There are also several similar recordings from dates around the same time and some controversy about Callas’ high E-flat that the recording is famous for so it is easy to be confused and the dates matter.

AFAIK @support has not confirmed the issue so far and I expect a new release is needed to correct it.

You mean the implicit date sort on the album view, right?

If that’s what you mean I have noticed that as well. There do seem to be changes happening though so you might want to re-check.

You mean the implicit date sort on the album view, right?

ya, it used to be a bit more logical in 1.7. Just looks odd if a new recording gets dropped to the bottom because recording date is not tagged.

I always like to see them recent to historic, sometimes also the other way round. But sorting is no longer consistant, it seems

Have you seen the recent response from support on that topic? It is unclear to me if Roon are working on a fix, as it is tagged as solved:

Thanks @darym3 for bringing this up in such a kind way. I appreciate you chiming in @tripleCrotchet - it helps us to know how changes are perceived by as many of our users as possible. @BlackJack a big thank you for the detailed solution

Normally, Roon say they are looking at, or fixing the issue…

As you know (you posted in the topic), the issue is also reported here (and still open):

I saw it too and didn’t like it. When a support request gets a post marked as a solution, there’s usually a grace period, to say thanks or to complain if someone thinks its not solved, before the thread gets closed. Not in this case. It got (manually?) closed even before the last reply from Roon Stuff, IMHO without really addressing the issue at hand.

Normally, Roon say they are looking at, or fixing the issue…

So I continued in a PM, asking for clarification, but didn’t hear back so far.

Hopefully we’ll hear back after the weekend.

Just found out that it is a known issue, ticket is in:

Release Date is not displayed in Album View [Ticket In] Support

Hi, @Martin_Schneider , @inonio , thank you for your reports, we have an open ticket about this issue. – Ivan