I noticed that individual movements of a composition in Album View are no longer indented in album view. This is slightly confusing. 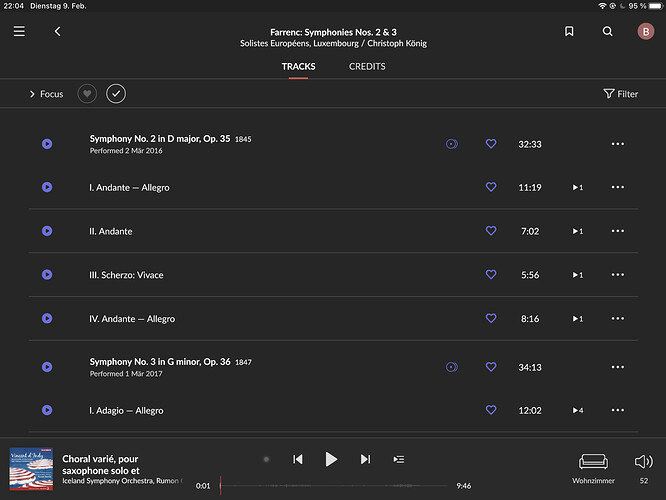 A slight bolding of the composition name is not enough. It needs to be indented like before.

Changed title to make clear its a bug.

Have you seen what happens if you have SECTIONS as well, e.g. Acts in an opera? In 1.7 these were indented at the same level as the Movements. Wonder how they look now.

Nothing is indented, including Section.

it has to be a bug.
In the new (1.8) display, it’s not possible to see where a composition list of movements ends.
See for example:

i think in roon 1.7 there was a indentation (right term?)

Yes, I am very surprised nobody as officially recognized this yet as a bug.

Was it an error or was it intentional?

This was intentional. It addresses some the squished-ness that resulted from indentation particularly on narrow form factors. Portrait device support was a huge theme for 1.8, and in some cases, it requires stepping past old decisions we made that were hostile to that form factor.

Roon is just as aware of compositions/grouping as it was before–this is purely a visual change.

In 1.8, we are distinguishing the groups by using a bolder font for the composition title. You can also see the composition indicator and use that as a cue for locating the work headings, which will help when scanning the page. 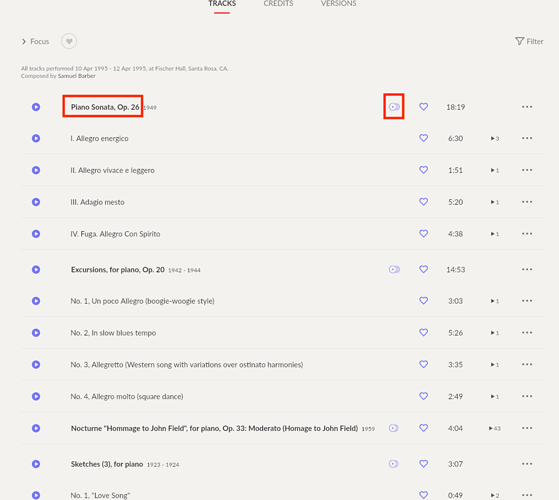 @brian Sorry to say, but this makes absolutely no sense at all!

Even the dumbest music management systems (iTunes?) have movements of compositions indented and Roon can’t do it? I believe this requires some reconsideration.

Why not disable it for portrait mode if its an issue there?

NB: I dont see any bolder font on my iPad at all. All looks the same

Roon is just as aware of compositions/grouping as ti was before–this is purely a visual change.

Ok - so the counting of compositions and sections for Focus is definitely a bug then? Good to know.

As for the indentation I think it is a big degradation in usability. Together with the now playing info now to the right and not showing any meaningful information for long classical track texts.

The Composition icon appears to be missing from the UI if there is only one performance in one’s library. Perhaps this only applies when the user is not subscribed to a streaming service (which is all but guaranteed to include multiple performances). This could account for some of the variation in how Compositions are displayed.

For what it’s worth, @brian I totally get the desire to not squish on narrow devices.

And I think that not indenting much if at all is right on an iPhone, though I might add to the differentiation beyond just bold for the movement - underlined, or maybe font size +1 or something.

However, my bigger point is: Not sure if in the name of responsive design-iness you could have the indent vary by the window width? So maybe for iPhones it would be 2 pixels, but on a 42” monitor it would be whatever the equivalent of 1” is… and it might change on an iPad if you went from portrait to landscape. I know responsive UI elements can be a PITA, but this seems like one where sometimes you have lots of space to play with and sometimes you don’t. Not suggesting having columns appear / disappear, just to use the space for visual differentiation when you got it.
</one guys opinion>

How many people are using iPhone to browse large classical libraries? just wondering…

I don’t know about large classical libraries per se, but about 40% of my listening is classical music, often from browsing related recordings / artists suggested by Roon off of Tidal / Qobuz (I have maybe 500 classical albums ripped from what was new 15 years ago and I often prefer either more recent or older recordings).

I’d guess that 80% of my Roon remote useage is iPhone, and because I often listen to classical in my living room, a disproportionate amount of my classical listening is remote’d from an iPhone.

I know some folks who’ve been with Roon for a while might perhaps be surprised by my modality of useage; only Roon knows the actual patterns, but I’d hazard a guess that I’m not alone.

Actually, movement-tracks are wrapping in Roon iPhone anyway if they are a bit longer, which is the case very frequently for classical movements. So those indention pixels wouldn’t make the slightest difference to space usage on the phone (it may just wrap one word earlier) but would make a huge difference in structure and usability on larger devices (Ipads, etc.)

I’m not sure how a 3 or 4 character space before the name of a movement would make that much of a difference.

As as been mentioned above, when the name of the movement is too long for the screen it wraps to the next line. Therefore, the only case this design decision would make sense is for is movements whose names are just within the number of characters that would fit on one line.

The “boldness” is barely visible, as can be seen on your screenshot.

I hope you take another look a this and revert to the prior design, which made it much, much easier to immediately identify a work/movement.

Guess what? Movements indented! And quite a bit at that. They also let long movement names wrap. Looks good to me. 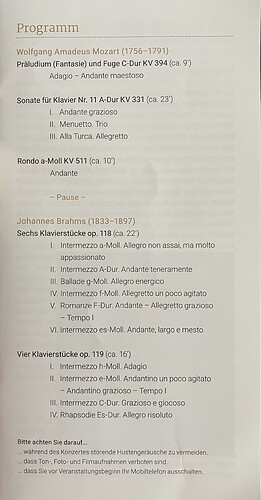 Picking up that “Roon as a Music Magazine” theme…

Totally agree with the user responses here, indenting movement titles is vital, and as already noted the titles will more often than not be wrapped on mobile anyway.