1.8 BUG: Roon always jumps back to first page after selecting an Album in "My Albums" [Ticket In]

This is a really nasty one: When I am in my library on a filter, lets say “Piano Concerto” and I select one of those 440 or so albums to look at details, then decide to go back to look at another one, Roon always jumps back to the FIRST PAGE of the Albums view.

13 Likes
Please fix "My Albums" scrolling back to top
Back always resets view/returns to top
No persistence when using the back arrow
sergej_teregeshev (sergej teregeshev) February 11, 2021, 5:07am #2

@support
and also in: 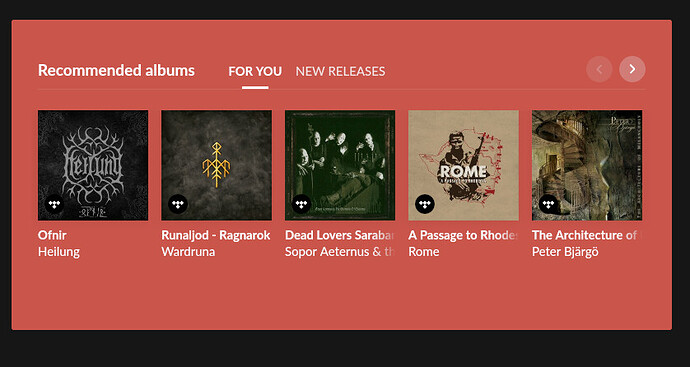 Can confirm that the problem also occurs on this screen.

Yes, it is really very annoying…

I’m annoyed with this problem too. I want it to return to the display I was last using. I’m browsing from that point and I definitely don’t want to have to start over.

At least with the last build you could slide to the letter of the alphabet where you were last, but I see no way to jumps to a letter now. Not good.

Hi, @bbrip , thank you for the report, coul dyou, please specify, on which screen are you seeing this probelm? Could you, please, also post a video or a screenshot to illustrate? I think I know what is going on, but jsut want ot confirm before talking to the dev team about this one.

I have the same problem.
Also there is a similar behaviour on “Recent activity” screen with added albums. When I look some album and then press back it is always the very beginning of the list though I was in the middle.

@ivan , I am seeing this on Album Screen. Apply just any focus filter. Genre for example.

Then browse down a few pages (or near the bottom), select an Album to look at, go back to album view. And now you will find that Roon does not go back to where you left but instead jumps to the very top! I would not consider calling this expected behaviour.

Other users have confirmed the same problem. I could put a screen print of album view here, but its a bit pointless as it doesnt capture that „jump to the top“.

Pls. let me know if you could reproduce or if you need further input.

NB: I can confirm what @sergej_teregeshev said above: This also happens if you select an album on the second page of any of these „Similar Albums“ boxes. Or on „New Releases“ - it always jumps back to the first page / resp. Top.

Similar problem here with Focussing on “Not identified”, Identify an album in the second page, go back and the Album-view is back on the first position.

whatever focus you use, you will get the same undesired result

Thanks, @bbrip , I think we have several open tickets about this behavior.

good. So I would assume this is pretty high on your list to get fixed.

@ivan Whilst on the subject of jumping around see:Can't remove own tags 1.8 - #10 by Daren_Peacock in the context of removing tags and Roon then jumping to earlier albums rather than leaving where you left off

Yes, this is annoying.

I know I’m probably in the minority, but I liked the horizontal slide, however I mainly used a wide-screen monitor for my remote.

@ivan I have this same issue when browsing albums without any filter. I have ~6K albums. I scroll down a couple of hundred albums down, click on an album, add it to queue, and click on back arrow. It goes all the way back up to the top of the 6K albums instead of returning to the same place in my album list where I had previously scrolled to.
This is a terribly impactful problem for me. Thanks for you support!

@dylan, Very disappointing to see that this is still not fixed in Version 763. This is pretty basic functionality, one should expect.

When can we expect this to work as expected?

Im also disappointed this wasn’t fixed. I mean, this is a critical bug because it ruins the experience. It makes roon unusable on the desktop or phone/tablet. They all exhibit the same behavior. And it happens on every list of albums no matter what filters are in place. How is star rating display more important than navigating your list of albums? If you can’t navigate you can’t listen. If you don’t see star rating you can still listen.
Sigh. Another 2 weeks of frustration on top of the existing 2 weeks.

I agree, this is a huge bug.
In the meantime I’m using other players and thinking about not renewing my expiring annual subscription, unless they solve this issue quickly.
Very disappointed.

Can confirm this is new behavior and mighty annoying. I can be somewhere down at the Letter S, look at an albums Tracks, hit the back button and I jumps back to the top of the Album list.

This only happens when I have a Focus filter active. Which is always. And it happens across apps. On the PC as well as on my Fire Tablet.
Also the strangest thing is this looks deliberate. Because when I go back I can see that Roon remembers the position it was at and then starts scrolling to the top within half a second or so.