I assume there are a few similar 1.8 Discovery options such as Explore Chamber Music . . ., Explore Opera . . ., Explore Symphonies . . . etc. But I am not sure I get the point of them in their current implementation. Lots of potential though for both casual and expert listeners with a few tweaks, better metadata and some customisation tools.

This example of “Explore Chamber Music . . .” has been triggerd by a disk of Viola transcriptions of turn of the 20th century to mid-20th Century English art song and cello works.

But why is it “Explore Chamber Music 2011-2017”?. These are just arbitrary dates around the release date of the disk. Why isn’t it more meaningful dates around the dates of the compositions or music styles on the disk? Something like "Explore Chamber Music 1900-1970 would make more sense. This one doesn’t. It is not a complete miss. The release dates gave me something to click on. It just doesn’t really make much sense in a Classical context. 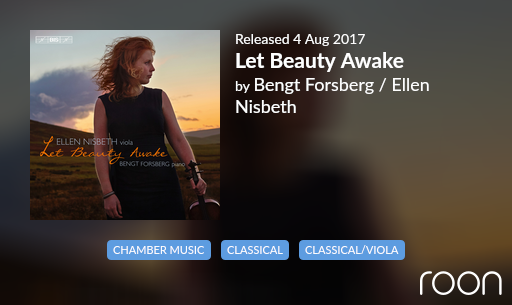 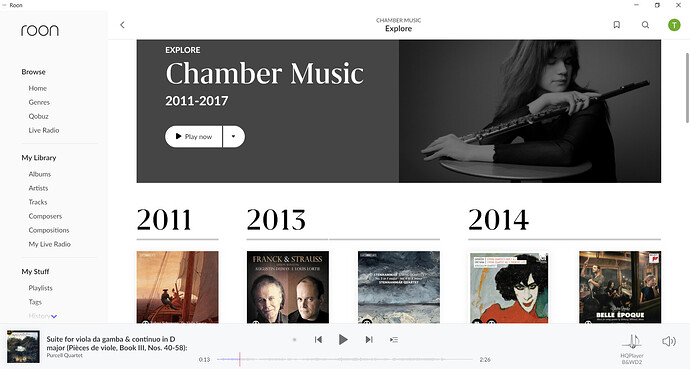 @tripleCrotchet I like this game. I think it can show what could and/or maybe should be done using the data structure already available to Roon.

I am using the following album as a starting point.

The works on this album have been released several times in different combinations. In my library it overlaps with the box set of Beaux Arts Philips recordings from 1967-1974

But here I am starting with an album containing a bunch of Schumann chamber works by the Beaux Arts Trio. What does Roon know about this album? The album as such is labeled with the Genres “Classical” and “Chamber Music”.
Roon knows the works on this album, being Schumann’s Piano Trios, his Piano Quartet and his Piano Quintet.

Just as an example

Same for all the other works on the album.

Roon knows the recording dates on this album (because I have added them via my file tags). They are between 1971 and 1975.

It also knows the credits on this album.

Lots of input for a “Discovery” algorithm.

Similar to Tony’s observation, this is what I get: 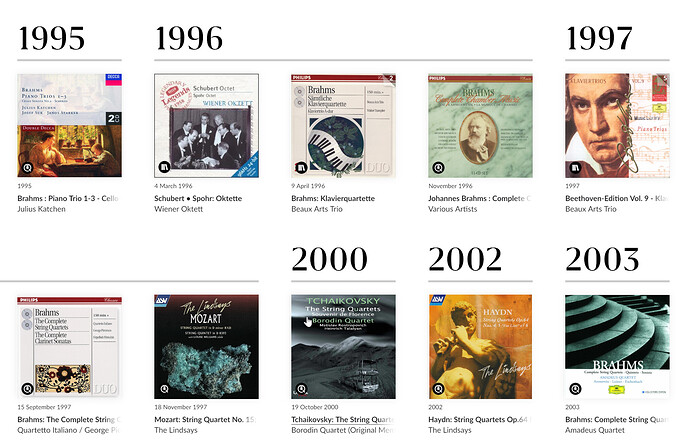 The time period 1995-2003 is completely irrelevant for discovery. The album I’m listening to was released as a Philips Duo Twofer in 1997. It contains recordings from 1971 to 1975. Why should I discover chamber music recordings from 1995-2003 based on this album? Funnily enough, some of the albums picked by release date are even older than the one I started with. I can do the same by applying focus on my albums in two clicks.
So for sure, there is some more information used in the background, that offers me some other albums by the Beaux Arts Trio containing compositions by Brahms, Tchaikovsky, Haydn, Mozart, and Beethoven. I guess that is OK. As Tony said: it gives me some albums to click.

But there could be so many options for discovery based on this album:

These would be real discoveries in my opinion. And most of the data needed to make these connections is already there.
Why does the user get a very simple Genre/Release Date/Artist kind of selection that does not work very well for classical. Maybe it’s also not working very well for other genres but I’m no expert there.

Yes. Really a lot of potential here. On the face of it much of the basic metadata is already there and if you are motivated and have the tools there is an incentive to customise the edits so you get a better listening experience. But in its present form it doesn’t really work.

It didn’t take me long to find another example. In fact it was just my next disk. This time it was "exploring Choral Music . . . ", a favorite genre of mine. 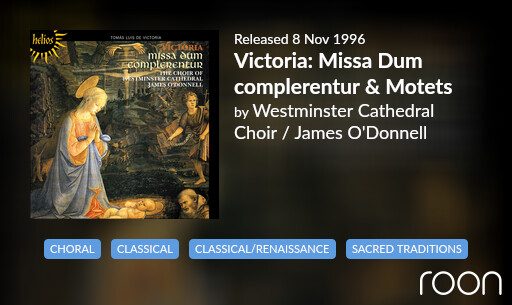 Again what I get is something quite arbitrary around the recordings release date, and as Klaus observes that might not make much sense even on its own terms (but it might!). This for example is Hyperion’s budget label Helios where they often repackage and re-release much earlier recordings from their back-catalogue. The Helios release I have is 2011 but the original Hyperion release is 1996. However, in this case, in that sense, roon gets it right: 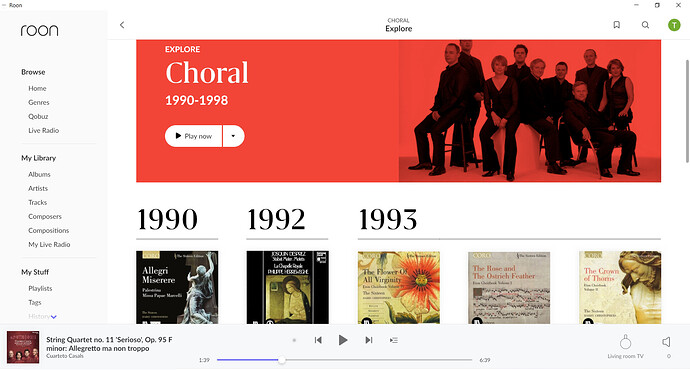 In this particular case, I can see that a shuffle of the recommendations would actually be a nicely consistent and interesting playlist. Period and style is similar. But this is just luck it seems to me. If I start with some more modern Choral music like Morten Lauridsen, again roon is exploring the Choral music of the release date rather than the composition date. In that case all the recommendations are still Renaissance and Baroque (probably because those styles dominate the recording market) and the miss-match in the recommendations is very striking.

you might want to adjust the thread title, Tony

It shows Roons album title (normally I have set it to prefer file…) and it shows the original release date, given by my file tags. But this is being ignored for Discovery 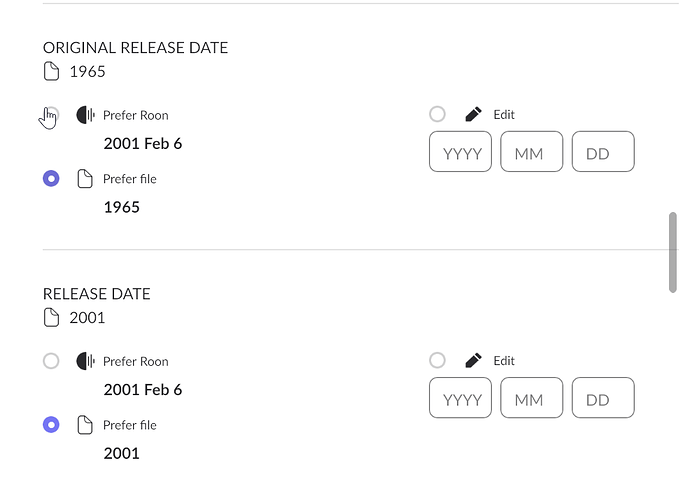 Some suggestions fitting to the original release date by accident, since lots of these recordings haven been re-released in the late 90’s 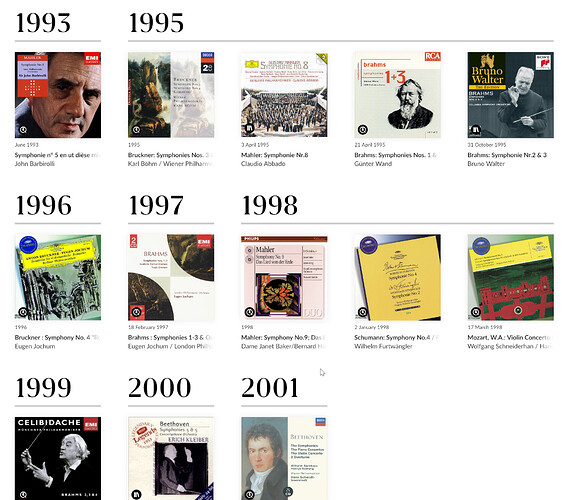 Strange mix of selections, containing Mozart and Beethoven It’s not terribly bad, but still miles away from any curated set of discovery items.

as a side note, the discovery feature vanishes if I disable Qobuz. I would think that a 10K album library could offer enough data to cross-reference for discovery based on meta-data.
I feel that this not very good value offered for Roon-Users with local files.

Ya, saw those, no matter whether Chamber Music, Symphony, Opera, Looked at them, rolled my eyes, moved on

Most things „Valence“ia & Classical make you LOL, shuckle, despair, grasp for breath (cross as appropriatej… But at what it is, its best-ever

as @tripleCrotchet says, take composition dates, recording dates put it into decades and it would instantly start to make some sense, depending on quality of metadata (again).

you might want to adjust the thread title, Tony

I changed it. It’s not quite precise as I didn’t want to put people off. I can tweak it again if you prefer?

I think these Classical discovery features have a lot of potential if they were implemented right with even a little tweaking. I would use them a lot and they could form the basis of a much better roon radio experience than you currently get for Classical. For example, at the moment I have to remember to switch off roon radio for Classical even though I like it when listening to Pop and Jazz. There would be the added incentive to improve the associated editing tools for those who were prepared to put in a little effort for a marked improvement in the roon passive listening experience with Classical. For example, form and period are editable fields but instrumentation is not.

No reason either why they should not be available for local libraries, certainly larger ones. Seems like a reasonable request to me. I think that was the take away, for example, on the “In their prime . . .” thread.