Question 2:
“Playlists created in Roon are attached to a profile…” but when I create a playlist on the laptop, it is not visible on the iPhone device… and vice versa. Both are using the same profile. Is this behaving as expected?

These seem like very basic questions, so likely user error??

That does not sound ok. I have my core on mini and on iMac roon is seeing that 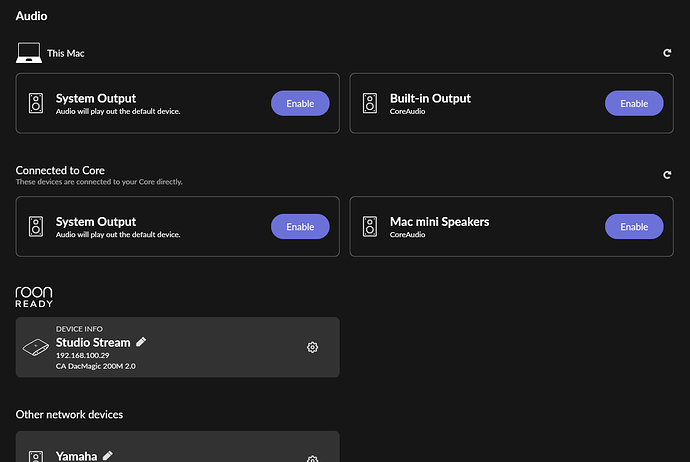 I am on android but it is working with playlist:

Maybe it is an network issue. I would reinstall the roon app on MacBook Pro to start fresh

To verify, go to settings/about on both machines and see what it says. Check the IP address it says the Core is using. If they are different then it is not correct if you only have one license or you want only one core running on your network.

If you want the Mac Mini to be the core then you should be able to switch to it on the MacBook from the Settings/general tab. I would do the full logout/disconnect and select the core you want. This also assume they are ont he same network and access is granted for the RAATserver and Roon in your firewall.

The 2 Macs are each showing themselves as running the core:

In the Settings > General tabs neither computer seems to be aware of the other - by that i mean both read “This Mac” and there is no option to choose a different core.

I should mention these are both on WiFi for now during setup stage (same SSID). Could that be a factor?

I would disconnect and/or logout from the general settings on the laptop. Then reconnect and find the mini. It sound not be I problem if on the same network.
I did have the core on iMac, then got the mini, but I do not remember for sure how I did the switch

You can run a Roon core on one, two, or more computer devices, but you can only have one authorized at a time. Go to Roon - Settings - General and click Disconnect from one and then Connect or Use this PC to connect to another. Roon will ask you to unauthorize the previous one.

Traian,
Thanks for your suggestion. I did just that, but it didn’t seem to clear up things. When I disconnect I am asked to choose the core. Ultimately I will end up with the core on the Mini, and plan to run it headless, so I’m running RoonServer also on the Mini for now. But I QUIT RoonServer for now, and am just using Roon on the Mini. When I disconnect the Core I am presented with 2 options: 1. Mac-Mini, or 2. This Mac. Option 1 times out, but Option 2 seems to work.

But the problem is on the other computer (MBP) the only option is “This Mac” and when I choose it I end up with 2 different cores and I am able to play music from both devices.

Jim_F,
In the above procedures, I am never asked to “unauthorize”. I also suspect this issue is related to playlists not showing up across devices.

I greatly appreciate time and comments of the posters.

In the above procedures, I am never asked to “unauthorize”. I also suspect this issue is related to playlists not showing up across devices.

That is for sure (I hope)

I used to have roon on the iMac, then moved to a dedicated mini (I do not remember the procedure). 3 moths ago I did switch from the full app in the mini to the Roon Server. I think I did a back-up, changed the name of the old app folder, install the server and load the back_up.
The final solution is to back up, rename all the folders, and reinstall. Hope that would help.

Can you post screen shots of the settkngs/about and settings/general screens from both machines?

I have a feeling this may be related to network security settings. Especially using WiFi.

It would be best to have the core wired and then work on getting it setup. You may do all this troubleshooting twice or make unnecessary changes setting up over WiFi then changing it to wired later.

Here they are. I only grabbed as much as would fit on a screen. Didn’t seem like any relevant info not captured, but I can upload more if you think it is useful?

Re WiFi, you make a good point. I may be chasing a non-issue. I do plan to have the Mini/Core computer on ethernet, but it isn’t easy to do right now. Thanks for the comments. 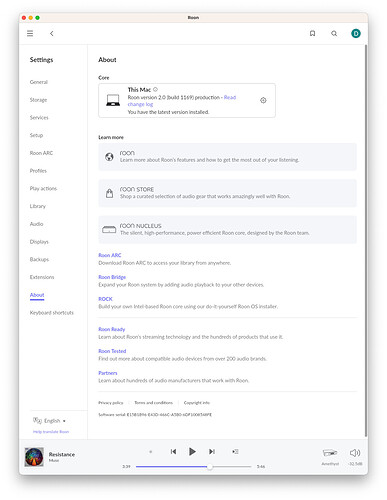 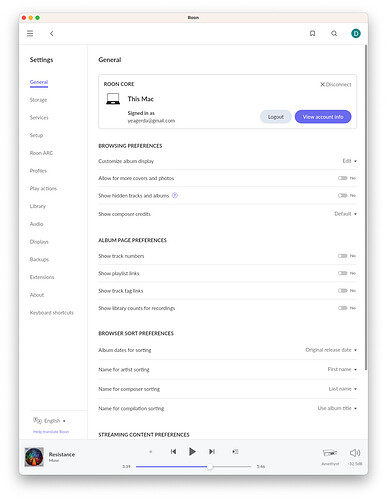 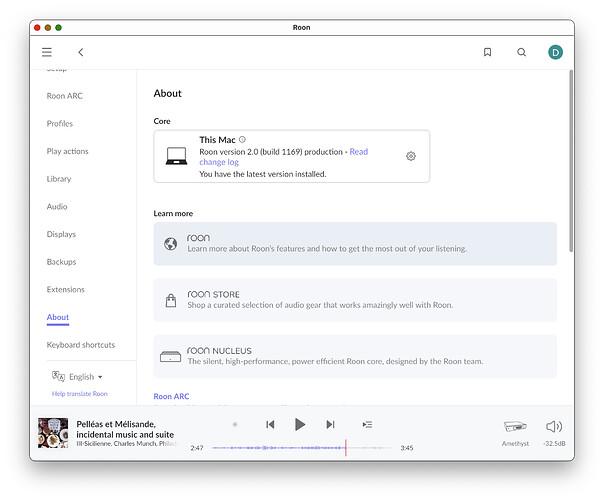 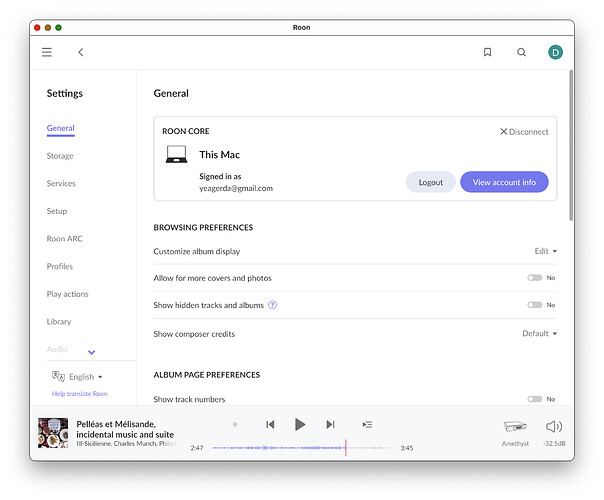 So I think in your description of what you were doing:
“Ultimately I will end up with the core on the Mini, and plan to run it headless, so I’m running RoonServer also on the Mini for now. But I QUIT RoonServer for now, and am just using Roon on the Mini. When I disconnect the Core I am presented with 2 options: 1. Mac-Mini, or 2. This Mac. Option 1 times out, but Option 2 seems to work.”

And then, on the MacBook Pro it gives you the one option of running a core using the App only, and it cannot see the Core on the mini, assuming one of the cores (server, or app) on the mini was running when you tried to connect to it.

So what I would do is this, get a core running on the MacMini, preferably what you want to ultimately use, which I believe is the RoonServer running headless. Then start the Roon app on the mini and connect it the RoonServer to make sure the RoonServer is functioning.

To address this you should look at the IP addresses of both machines and make sure that they are both on the same IP subnet, and that the firewall settings are correct to allow them to see each other and the RoonServer apps in this KB list:

If you’re running Roon in remote mode and having problems connecting, here are some troubleshooting steps to get you going. Accept Remote Connections The first thing to confirm is that your main Roon install is set up to accept connections from ...

I hope this help and isn’t just a bunch of confusing rambling. Let us know how it goes.

I will follow your suggestions. First, when I had both Roon and RoonServer running and I look at options for for cores (by disconnecting what Roon already was attached to), I see 2 of them - “Mac-Mini” and “This Mac”. When I shut down RoonServer, there is only 1 core available, “This Mac”. So I’m proceeding assuming “This Mac” is associated with Roon, and “Mac-Mini” with RoonServer. Mac-Mini happens to show the same IP address as the Mini.

Selected “Mac-Mini” on the Mini. It seems ok for a few minutes, then disconnects, and keeps retrying to connect.

I open the laptop, which had Roon running, and disconnect. It shows Mac-Mini and “This Mac”. The Mac-Mini core (seen on the MBP) bounces between READY (green dot) and INITIALIZING (red).

I then closed Roon running on the MBP, and the Mini settles down and remains connected to Mac-Mini core.

Out of time right now, but next I will explore IP addresses and firewall settings. Update tomorrow (EST in USA).

Brief update. All running smoothly now - RoonServer is running on the Mini, and “Mac Mini” core is selected. Being consistent with which core is running does seem to clear up the Playlist problem noted above. Many thanks for the explanations!