Apologies, but there’s still one point I don’t quite understand. Why don’t you recommend plugging a Roon server directly into a DAC, which is one of the things I understood Nucleus+ is designed to do, and how it’s been reviewed? I know you’re in favour of Roon, but I get the impression — and I could be wrong — that there’s not much enthusiasm for Nucleus+.

The general consensus is keep the computer equipment away from your audio equipment. Roon supports a plethora of network endpoints and it’s the recommended implementation method for the best sound quality.

Nothing against the Nucleus+.

The general consensus is keep the computer equipment away from your audio equipment.

Danny is right that having the analogue audio parts well away from ‘radio noisy’ networking is a good idea.

Aren’t streamers and similar devices, all computers of sorts, and therefore also “radio noisy”? Isn’t that why they’re screened? I wonder why Roon haven’t put in their literature that Nucleus+ should not be plonked on a Hi-Fi rack, and should be kept well away from audio equipment. Strange that I’ve ever come across this before, but you learn something new every day.

Strange that I’ve ever come across this before, but you learn something new every day.

It’s been recommended by Roon for a long time.

You really want Roon on the PC, and the DAC somewhere else. I know the “Computer Audiophiles” may not like that idea, but the computer is a pretty electrically noisy place. In an ideal situation, you’d want your DAC to be networked and far away, but if you can’t do that, you’d want a bridge of some sort. PS Audio makes one (that will run RoonSpeakers soon!), and you can also make one with RaspberryPi or maybe even an older Android phone. If it were me, I’d build kickass Roon library managing PC…

is having the media server away from the listening room really necessary, if we are using completely silent builds tailor-made to be in the listening room (such as the CAPS machines mentioned)? Electromagnetic and radio-frequency interference are the kind of “noise” I’m talking about, not the audible kind. We worked with Meridian for many years on these issues when building out the Sooloos product line, since the original Sooloos devices were fanless PCs in pretty boxes. They were fairly wel…

It could be there? How would I test for noise? Subjectively: ABX test between Computer->DAC and Computer->Network->Bridge->DAC. Objectively: Plug Computer->DAC and Computer->Network->Bridge->DAC into a scope with plenty of dynamic range, play the usual test signals, and analyze/understand the differences. The first one tells you if the difference matters to you personally. If you iterate the test over a population, you can determine whether it makes a difference to anyone. The second one t…

I wonder why Roon haven’t put in their literature that Nucleus+ should not be plonked on a Hi-Fi rack, and should be kept well away from audio equipment. Strange that I’ve ever come across this before, but you learn something new every day.

Nucleus+ is a turn key solution that can be plonked down on a Hi-Fi rack.

But why would you want the Nucleus there with multiple hard drives hanging off of it or an additional usb hub when you could just use your Aries Mini in RoonReady mode feeding USB to your Dave with equivalent or better results?

I’m not sure my laptop’s really up to it with 4 gigs RAM and the number of albums I now have, and that Roon’s database will be considerably larger than that of JRiver. I’d also thought that a bespoke device, like Nucleus+, would be a better sounding solution than sticking with a laptop running Windows, but I appear to be wrong on that too.

I now exit rather more confused than when I entered I shall however, bear your suggestions in mind.

Well buy the nucleus if you need more power there’s just no particular reason to put it at your Dac with the Aries mini already there.

I’d use the Aries’ optical output with Dave… At least in terms of conducted naughties, you’ll block any leakage currents and associated RF from Nucleus+ coming into Dave.

"Yes optical is the best input - its really a question of getting the other inputs to match optical."

It’s very difficult to isolate ethernet and USB to the extent that optical does. As long as the sample rate limitations of TOSlink isn’t an issue for you. The reason Rob isn’t worried about TOSlink’s jitter with any of his DACs: 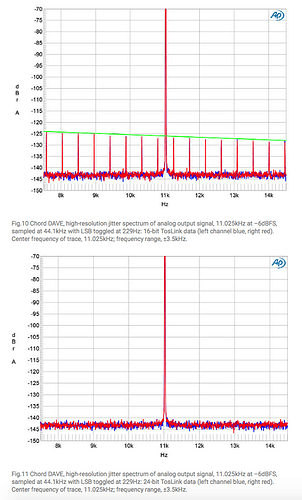 This subject is being seriously over complicated. There is nothing that dictates that you have to use a low powered end point. This advice originally refered to forced air cooled hardware, especially that with the processing power and graphics that would give the best Roon experience. A device like Nucleus takes care of that being passively cooled and clad in a kilo of cast alloy which I would wager takes care of the vast majority of any radiated interferance. ROCK is also highly optimised as a direct playback engine and is pretty tough to beat in that respect. I would suggest the advice is kept as simple as possible. Experimentation with end points can easily come later. A Nucleus + should work well here and not everyone has the time or inclination to build things and load software on to them.

@Colin_Green1, you can make this as simple or complex as you wish. If you keep it simple you can build up to the complicated stuff in time if you wish. Just have a clear vision of your basic goal. You can build on that later.

Thanks, Henry. I shall give the options serious thought before deciding. My priority is listening to all those albums, or as many as I can manage, rather than faffing about, though it seems that can’t be avoided.

This is what frustrates me a little though. It isn’t hard to do this to an exceptionally high standard without ever having to wield a screw driver or type a word of command line instruction into a console window.

I agree with @Henry_McLeod1.
The arguments for separation sound logical, but the proof is in the listening.
I have a DAC (a Meridian 818) with a direct network input, as well as a USB input. A have a Nucleus, located in the same furniture. I have compared the network connection, direct USB from the Nucleus, and network to a MicroRendu in turn connected to USB. I have noticed no difference in sound.

I have also tried a Hugo 2 used for headphones both with direct Nucleus USB and with WiFi to an iPad with USB to the Hugo, and found no difference (so far, I’ve had it for a week).

I’m not saying it couldn’t be a problem in some cases. And to your ears. Plus you have spinning disks.

But I would suggest not making this your top priority. Start simple, you can always add separation later if you think it matters. (In my case, I had separation but removed it, to simplify things and reduce dependence on a lot of stuff — every box, every component, is a possible source of failure.)

Is the Nucleus+ up to handling that many albums?

I was about to tell you to consider going with a dedicated PC for this placed in another location than the HiFi equipment. Since the Nucleus+ is basically a very well built NUC even the i7 could, probably, have trouble with that kind of library. Then I read about it being 25k albums and that seems more resonable.

But I have read about user experience where 300 000 music files have been to quote: “choking” the Nucleus+. Also heard this about users with “regular” NUCs having issues with larger libraries. Maybe a software update to ROCK would solve this eventually, but I read this comment on the Nucleus+ recently where I read the person ended up selling the Nucleus+. It’s on another forum, but maybe that user is also registered here.

@Quaerit is feeding a Dave using the Auralic Aries G2. This isn’t a small or cheap device but it’s dedicated DAC USB implementation is exceptional. I can pretty much guarantee the Regen could be sold if you went this route. It also has wifi which is the recommended method for streaming.

Today I started using wifi as my streaming option, before reading your comment here. I think I distinguished yet another improvement in SQ and I will explore this more to validate.

I have the Auralic Mini (admittedly, a cheaper model) fed into Dave via optical, which I use for Tidal. I’ve given it a go with my music library, but I wasn’t that impressed.

I used to have a microRendu with LPS-1 feeding my DAVE and that, for me, was an improvement from having my modified Mac mini feeding the Dave directly. For a period I also tried the ultraRendu and liked what I heard but I was not prepared for the leap I got when playing through the Aries G2. Before that I only experienced smaller improvements with every change but the Aries G2 really made a substancial difference.

My own experience this far indicated better sound performance when having the Roon core separate and using a Roon end-point where my HiFi is. Some time in the coming months I’m also going to explore NUC with ROCK or Nucleus options to replace my Mac mini.

If the Nucleus+ can handle your library I think you should demo it if possible to find out if you get any sonic benefits (or other benefits such as simplicity). And since you have the Aries Mini you can test if that makes any improvement together with the Nucleus or not. Also find out for yourself if the Nucleus can live with your hifi equipment or has to be in another room.

But I have read about user experience where 300 000 music files have been to quote: “choking” the Nucleus+. Also heard this about users with “regular” NUCs having issues with larger libraries. Maybe a software update to ROCK would solve this eventually, but I read this comment on the Nucleus+ recently where I read the person ended up selling the Nucleus+. It’s on another forum, but maybe that user is also registered here.

That user had a lot of other issues as well, unrelated to their Nucleus+. We’ve had users with 500k tracks run Nucleus+ (albeit with some added RAM).

I wouldn’t push any Linux based Roon Server past 500k tracks. You won’t have a good Roon experience.

That user had a lot of other issues as well, unrelated to their Nucleus+. We’ve had users with 500k tracks run Nucleus+ (albeit with some added RAM).