I have been contending with issues re adding to my roon libary from my music library. I started a thread at the roon software category for the big picture as it concerns my experiences.

It made more sense to post to a new thread about the inconsistencies that attend adding multiple discs for one album.

For example, typically, I prefer to add multiple disc albums as individual albums with the same title and with the suffix Disc X of Y to one main folder with X folders inside re album title, and inside folder devoted to the composer.

The latest addition involves Amadeus, The Complete Original Soundtrack Recording, Sir Neville Marriner Academy of St. Martin-in-The-Fields. I added the album in three separate folders with same title ending in Disc 1 of 2, Disc 2 of 3, Disc 3 of 3. ITunes kept the additions as I created them. But, roon added the album as 2 albums: One album with Disc 1 Disc 2 and the second with no Disc designation ignoring my album title designation ending in Disc 3. Same cover art for both albums, different album title. And, once again, multiple additions of the albums which I needed to manage by hiding some of the multiples.

Typically, my additions to my music library which always remain as I create them, may be added to the roon library with all three discs showing up in one album. That’s fine with me. roon does that on it own, and I accept that without objection.

Other times as with a 3 disc Stravinsky album, Michale Tilson Thomas and San Francisco Symphony, which I added to my music library as 3 separate albums with appropriate titles but ending in the same Disc 1 of 3, Disc 2 of 3 etc. that roon “watches”, and roon added them as three (3) different albums AND again with two duplicates that I had to hide. To be clear, roon added five albums for the three I added. So I had to hide 2 of the 3.

There doesn’t seem to be a consistent routine. With the Stranvinsky album, I chose to name each disc separately, I.e., Le Sacred du Printemps, Persephone, Firebird as it made sense to do that rather than one title with all three titles. I have done that with other albums and the singular title with multiple compositions can cause roon to add the albums in a very confusing undesirable configuration. I am trying to learn how roon does its additions to its library. But I can’t seem to persuade roon to follow my lead. And roon is NOT consistent with how it does what it does. It’s hit or miss at best.

AND, as I posted at the roon software thread, I continuously find duplicates of albums I have already dealt with return as multiple, incomplete or complete albums (as to tracks) and with different titles compared to what I started with, which roon changed, which I then edited back and then roon changed the edits.

When in Rome does as roon does? No! I don’t think so especially if I take the time to edit what roon changes back to what I prefer and roon changes my edits. I was under the impression that a subscriber can edit the metadata, and I expect my edits to stick.

If hiding albums that roon duplicates often incompletely with different titles, and I deal with that but next time I launch roon, I might see those duplicates again with even different duplication as to the number of tracks requiring me to deal with the duplications by re-hiding them as deleting them would be drastic, n’est-ce pas, what is triggering these duplications and inconsistent handling of my additions?

Please understand, I love roon. I am patiently dealing with these peccadillos. Wish that only have to deal with these problems once. But over and over again. Nisht Git!!!

Hi Richard,
Will have to let to team comment on when and how edits don’t stick. There is something about album details persisting that is quite hard to pin down.

For the boxed set issues, I have tried merging within Roon to re-compile a set. This gets mixed results depending on whether the new set is sent for re-ID, manually re-ID’d or persists with the previous state. It varies depending on the exact match in the database.

The format that I do find works reasonably well is thus:- (example) 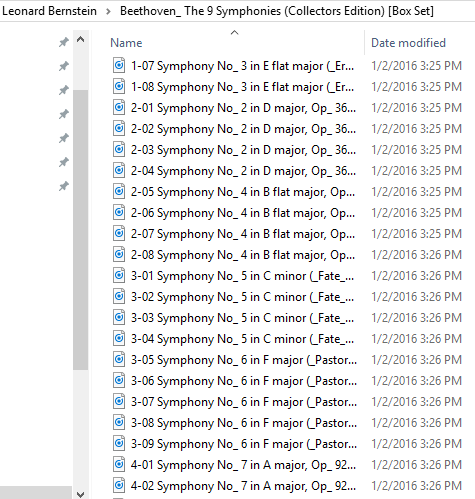 which yields the following match 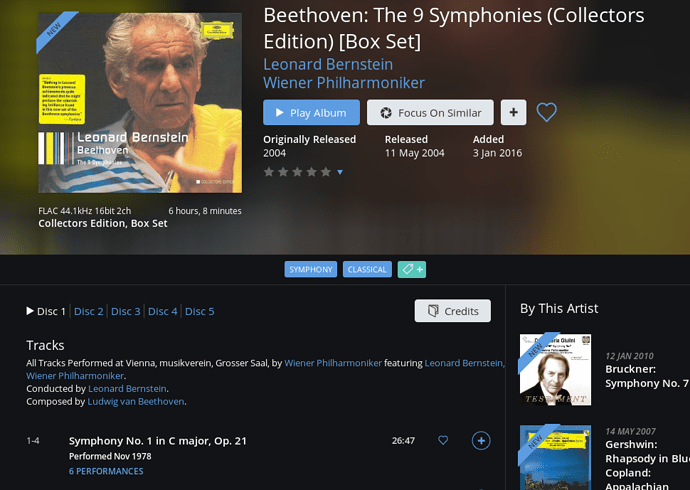 The difficulty with handling each disc as a separate folder is that some discs in big sets are also CD’s in their own right. I have some 20+, 40+, 80+ sets for Du Pré, Karajan, Toscanini etc and some albums stay as per set and others appear as the individual release.

I have yet to fix my Toscanini set. Can’t quite pluck up the courage.

I think the guys have improvements to ‘Box Set’/Multi CD set management on the list of to-do’s.

I appreciate your response, and your explanation for what may contribute to mixed results.

And, as for the Amadeus correctly identified, one need only Google the edition I added and any database I have viewed displays that CD as a 3 Disc CD Box Set. Yes, there are other editions of Amadeus with different disc numbers etc. I would expect roon’s database service when an album is identified correctly to know what Google finds and either add the album as a 3Disc in one album or three separate Discs but one album with 2 of the 3 and the third disc as if it were a single disc not associated to the box set? This example would demonstrate what you describe as one of the issues.

And yes, I could have added the Stravinsky as you handled the Bernstein. But the duplications of 2 of the 3 discs which database on Google display as a 3 disc box set in addition to the three albums totaling five and with partial track listings once edited, that return in roon, in yet a different duplication with different partial tracking listing, that would appear to be an issue you regard as needing to be handled.

Just so we understand one another, I am more than willing to appreciate the big picture roon provides, and understand the complexities of dealing with an immense database of music somewhere on the list of complexities like the stars at night – the infinite (hyperbole noted on my part).

I am posting to provide feedback NOT failure. And again to emphasize that my appreciation and understanding of the complexities allow for me to make the corrections, AND, I would appreciate that once I do make corrections my edits are accepted by roon and not changed back causing me to enter a loop of corrections, changes, and more changes, which eventually are accepted.

I have been able to compromise by finding a solution that roon will accept. But the amount of time and effort on my part has grown in the commitment asked of me. I tend to persevere because that is how I am. (Retired criminal trial attorney, who never gives up…)

My overall outcome is (once again) to provide feedback not criticism or complaints of failure.

Appreciate your thoughts. I’ll try to be more resourceful. Sometimes I stumble on an edit that roon “adopts” from me and leaves the addition standing as edited. And the majority of my edits and additions are accepted. But a growing number of incidents is noted. I was expecting with 1.1.88 and the release notes that roon would be more tolerant of personal editing. It’s a work in progress; and I will regard the development as such.

Fully agree. This is all just good feedback in an area that is pretty difficult. Meta data providers store stuff one way, we (users) tag and store our files in many other ways. It’s a big ask to create a set of rules that works with ALL permutations that will exist in the wild.

I know that @Mike et al want to make this better, so, I do expect some attention in this area later in the year.

In the meantime, I just did a trawl through the aforementioned 72 Disc Toscanini set I have. Some not ID’d and some with single CD ID’s. This means the set is all over the place.
e.g. Listed as Toscanini, Arturo Toscanini and many against the composer.

I found them all, tidied up a bit of folder structure and set them all to prefer file data. 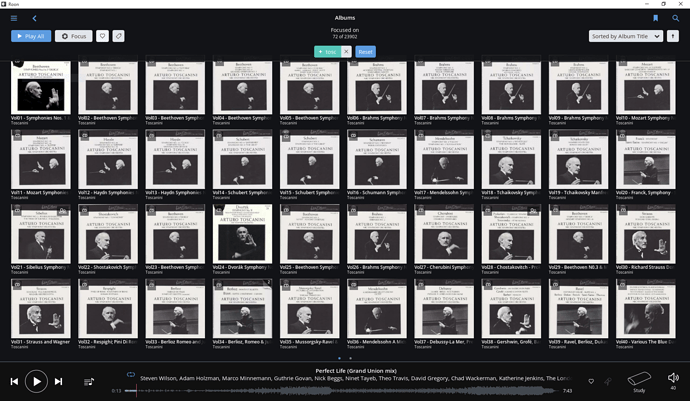 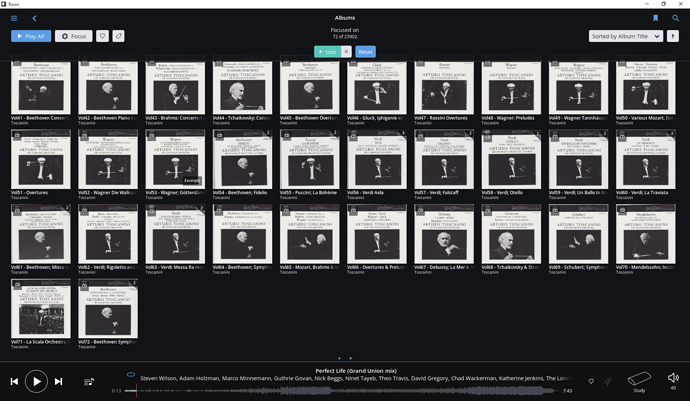 When I was confronted with the dialogue box informing me the discs or tracks may need to be managed, I.e., the top tracks were disc 2 followed by disc 1 and the last disc 3, I decided not to play with reordering them as just looking at the method for doing so leaves me cold. Accepted the merging of all 31 tracks as is since the disc and the tracks in those discs were correct.

Voila! The merge resulted in one album with Disc 1, Disc 2 Disc 3 in the correct order with the correct tracks.

Clearly, merge is a viable solution to curing additions to the roon library that don’t start out correctly. But, apparently, are ‘easily’ corrected.