I have a multi-channel NADAC player with the ability to play up to 7.1 music.

In both instances, they either (1) begin to play a track (for about 2-3 seconds), stop, and then start to play the next track, stop (and repeat until all of the tracks on the album have been passed through), or (2) nothing is played.

I am getting the same “orange lettered” message that other users have reported:

I have reviewed the other threads and have not seen any solutions that would work here (or have worked). However, I was not able to determine if whether Jumbo Frames are activated (there doesn’t seem to be anything in WHS 2011 that applies – if there is, I would appreciate learning how to check for it).

The NAS is connected directly to the router (Apple Time Machine) with a CAT 6 cable – located within 6 feet of each other). The router mode is set at DHCP and NAT. The two DACS (Merging NADAC 8 player and Logitech Transporter) and NAS have static IP addresses.

The NADAC and the Transporter are connected to the NAS via a Netgear JGS516 ProSafe 16-Port Gigabit Ethernet Switch (JGS516NA). The router connects to the switch with a CAT 6 cable. The Transporter is about 3 feet from the NAS; the NADAC is about 40-50 feet away. They are connected to the router via CAT 6 and 5e cable, respectively. [Grasping at straws here, I wonder if the CAT 6 cable makes this much difference].

I was also unable play these recordings on the NADAC with a two channel setting. However, both played beautifully through the two channel Logitech Transporter.

Hi @John_Roberts ---- Thank you for the report and my apologies for the troubles here.

May I kindly ask you to please provide me with a screenshot of your signal path coming out of Roon?

Furthermore, can you verify for me if you are able to achieve successful playback when streaming a stereo recording?

Thank you for your interest in this.

I have played a lot of stereo music streamed from the NAS through the NADAC (with Roon, it sounds great!!). good).

I believe the signal path is what you wanted to see. I am also enclosing the file tags.

Please let me know if you want to know anything else. 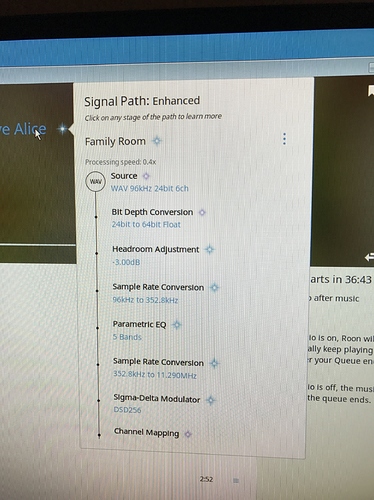 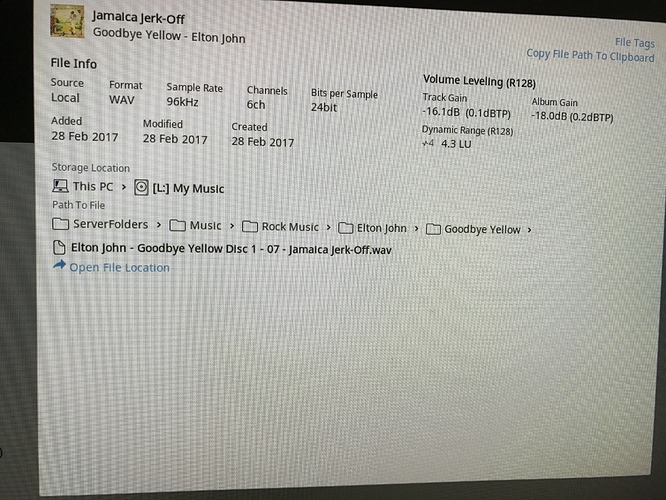 The processing speed is 0.4 X in your screenshot and this is likely to be the issue…I believe the baseline needs to be at least 1.3 X so you need to reduce your DSP settings accordingly or get a much more capable machine to run it as you have setup now

Thank you for the suggestion. Rather than turn off the DSP upsampling, I turned it down until the processor speed picked up. I found that at DSD64, the multi-channel function was able to run consistently.

My ears have not “calibrated” yet to what Roon is capable of producing (particularly through my Merging NADAC 8), so I am not absolutely sure that the following is accurate: it does seem that the quality of sound coming from the speakers took a bit of a “hit” in doing this. Have you noticed this as well?

If so, is this a “necessary trade-off” or is there a different setting/configuration or something else that can be done to increase the processing speed and maximize the quality of the sound?

I followed Wizardofoz’ suggestion and turned down DSP upsampling. My NADAC 8 player attained 1.3 processing speed at DSP64. As a result, it was able to play 5.1 music without disruption.

After spending some time with it, I became dissatisfied with DSP64 level sound (especially since the NADAC plays the same tracks at DSP256 in stereo). I contacted MT (manufacturer of the NADAC) and explained the situation and described the suggestion that I had gotten from Wizardofoz. They emphatically insist that the NADAC 8 player is specifically designed to produce DSP256 multi-channel audio and that the solution to my issue resides with Roon.

So, I am returning to Roon (and @Support) for obtain assistance in improving my multi-channel audio experience.

Upsampling to DSD256 (or higher) requires serious computing power – multichannel even more so. As you can see, your 4790K is not up to the job. Also note that for upsampling, Roon currently uses one core per zone – but even if Roon were to use all available cores in the future, I doubt that it would do DSD256 in 5.1. SMP (Symmetric Multi Processing) is hard, not as efficient and has serious overhead issues.

If you are committed to follow the upsampling path to DSD256 multichannel, you may want to look at adding HQ Player to the mix – its raison d’être is upsampling, especially to DSD. It supports multi-core processing (and offloading some of the load to select NVidia video cards supporting CUDA). You’ll also gain a wider palette of filters to choose from, though you may be limited to the less heavy ones on your hardware

Again: if it does multichannel DSD256 at all – but perhaps some of the HQP buffs will chime in with more experience with what you can expect from the hardware you listed.