This one is really stomping me.

However the White Album insists in making a 60 track double album rather than two 30 track albums.

The first image is where I removed the stereo version, the second when I put it back in the watched folder. 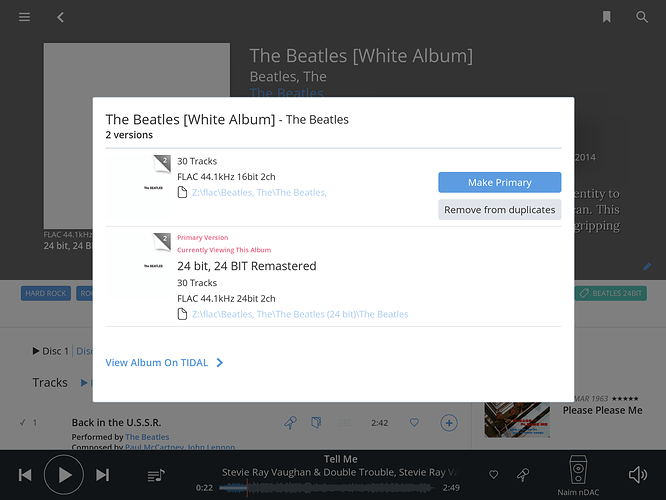 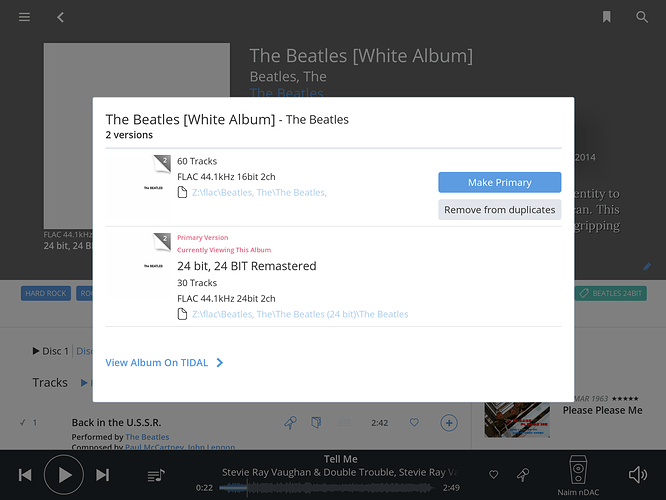 I’ve tried various things with the meta-data to no avail.

Sorry if this is too obvious and if you have already tried it but what about putting it in a separate folder called “the beatles (stereo)” or something like that? Looks like the hires version works as it is in a different folder.

With respect, I don’t think the latter problem is the same. As far as I am aware, the duplicates which are automatically played and included in total time are correctly displayed as duplicates in the pop-up shown above.

I think the OP’s problem can be solved with either new better folder structure, or better file tags, or both (belt and braces!).

The folder structure is. As follows:

The tagging is the same as all my other Beatles albums that I have in triplicate that don’t have this problem.

I’d be open to any suggestions you may have to improve the tagging or folder structure and resolve this issue.

Roon ID probably does not distinguish between mono and stereo. So, when it views disc 1 and 2 it sees the same album but duplicated.

The logic that provides auto ID in the vast majority of scenarios likely fails with this specific case. Although, on seconds thoughts, you have an album with two discs that totals 60 tracks. Roon is probably working correctly. You folder and tags say that you have a 60 track album if I follow what you have shown above.

I appreciate your help but as mentioned Roon has no issue with all my other Beatles albums, all ripped by dbPoweramp. 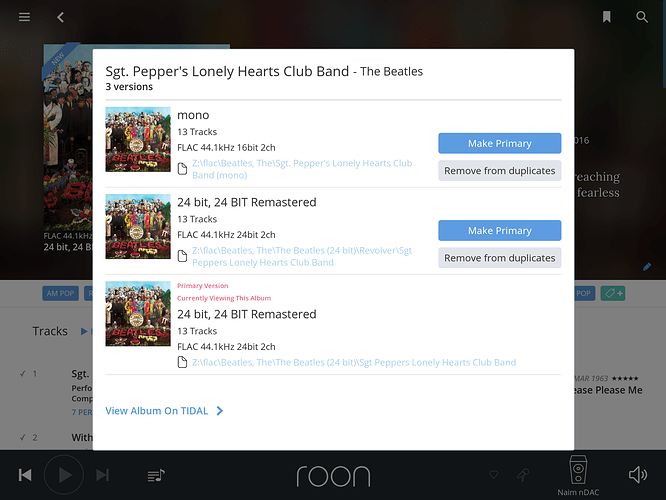 My suspicion is that it has something to do with the fact that it is a double album as this is the only difference between it and all the other albums.

What exactly do you mean by adding mono to the disc number?

Sorry…my bad. I forgot this is a double. I thought you had mono in disc 1 and stereo in disc 2. It’s a bit tricky as I cannot see exactly what you have here.

Can you post more info about which folders have been merged into the 60 track album? What are those folders? How are they described?

As far as I understand (which may be incorrect) you are not following the recommended folder structure for multi-disc sets:

…seems to me to break this rule:

One thing that likely won’t work is having all the discs of a box set separated into album-level directories, like this:

I suggest you organise the two folders:

If you add anything to to the CD1 and CD2 names, Roon stops recognising them.

Of course file tags may sometimes be perfect enough to get around this, but in a case where you know you have duplicates, it’s fair on Roon to use the recommended folder structure, in my experience.

Aha, sounds right — it just looked similar to the other bug.

It’s funny how Roon is making me a bit OCD about getting things corrected that just didn’t bug me with UPnP or LMS as I just could never manage to get them right anyhow. 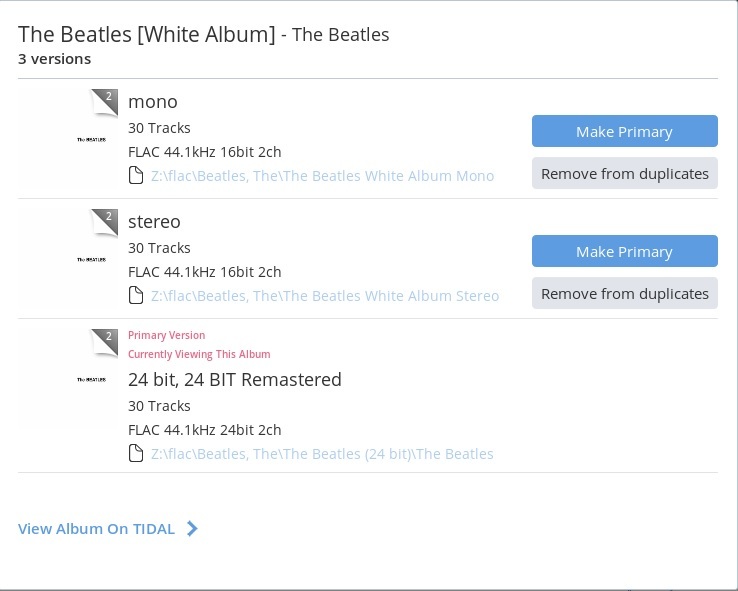 In the end a mix of removing to an editing folder (Thanks andybob for that suggestion) , re-tagging, clear up library and reinserting in watched folder.

Time for some music!

And there you now have a great example of “other versions” working well. When you know to move a folder, clear data base, edit tags and move back the results become quite manageable.

Glad you are sorted. OCD rules !!