I think that it is difficult for many to choose between Tidal and Qobuz because of their offer, using the both of them to not have to miss a single album become expensive per month.

Imagine Roon succeeds in convincing Tidal & Qobuz to sign an agreement that allows borrowing from each other’s library. Which would mean that when a Roon user who has an abbreviation on Qobuz and search for an album and Qobuz doesn’t have it in his catalog but Tidal has Qobuz can borrow it to allow his custumor to play the album.

Obviously also, something that Tidal doesn’t have borrowing from Qobuz.

I believe that Roon, Tidal and Qobuz would see their customer numbers rise.

Qobuz would have to embed Tidal and vice versa. A non-starter. It would also amount to Qobuz conceding its USA business plan on Day-1. Qobuz has much sounder finances than Tidal and is planning to take over a lot of its customers, and ultimately support additional labels. It has done that slowly and effectively in Europe. Qobuz are playing a longer game than Tidal.

Tidals finances are fine. I am not sure if Qobuz’s “long game” is by design either. I think they failed in their original vision for the platform and are now playing catch up. I think they can succeed in the biggest market by playing ‘white’ off against Tidals ‘black’ but there will be no fortuitous failure of Tidal, allowing them to step into the breach. They will have to do this the hard way.

Tidal and Qobuz are both very small players in the streaming market. The largest subscription service is Spotify. seem to recall that in 2018 it had revenues of $1.5 billion and lost $650 million.
When Qobuz was started they tried to get lots of customers, which is costly and resulted in them running out of money. After about 18 months they got a new investor that made a long-term commitment and they decided to build the service as a traditional business, slowly but surely, market by market. They aimed at producing a premium product and by all accounts they generate about five times the revenue per customer than Tidal. Qobuz generate fairly small losses, but a moderate level of success in the USA should see them into profit.
Tidal, on the other hand, has apparently burnt money from inception. Their business plan aimed at a much younger market offering exclusive content. I view it as a Kanye West vanity project. He sold about 1/3 of the business to sprint for about $200 million, which to sprint is loose change, presumably to attract subscriptions by virtue of the exclusive content. Apparently Tidal was running out of money last year, but who knows. Apparently, legally it is a Norwegian company and is recently the subject of criminal prosecution for grossly inflating the Kanye West downloads data. Their premium content is reliant on MQA, there is far less of it with far lower market acceptance compared to high resolution PCM, and MQA’s own finances are pretty dire.

Just a couple of factual corrections:

Given neither Jay-Z or Kanye West are likely to feature in my playlist, I am happy to be corrected. To be honest, I wouldn’t be able to tell one from the other. All I know is that one of them is married to Beyoncé as neither of them have recorded Bach’s Partitas.

with regard to the latter point, there’s no smoke without fire and 430 million downloads in five minutes does seem to be stretching the imagination.

I thought I knew something about business, but the economics of the digital music industry completely escape me. High definition audio is an ultra-niche market so is not disruptive. The people who will ultimately benefit from streaming are, presumably, the content providers, namely music companies, or online media businesses like Amazon Prime or Apple/iTunes. Because high definition audio as such a small target market, I cannot see where the brand value is, but it does appear that Qobuz understand this and realise that they have to build a financially sustainable business rather than a loss-making brand that is going to be acquired and make the shareholders a lot of money.

An important part of Qobuz’s approach is to integrate themselves into the music buying ecosystem, for example in the UK they have a close working relationship with the two main and widely read publications in their customer base, namely Gramophone and Jazzwise magazines. Their business plan is not to accumulate a vast number of customers, but customers who spend a lot of money, on premium subscriptions and downloads. So far as I can see, every other music service is about volume.

Nobody ever made a fortune by performing Bach! But if there ever was money in it I’ll bet Jay-Z would have had a crack at it! Importantly for me, we presently have choice and long may that continue! Roon is a richer experience and I am enjoying comparing the two services looking for the music I like. I am certainly thinking of looking at what downloads Qobuz can offer because I stripped all Tidal favourites out of my collection and I want to buy those I did play a lot. We’ll see.

Nobody ever made a fortune by performing Bach!

I think it was the first commercial Moog album, followed very shortly after Silver Apples of the Moon, which I play occasionally as punishment, and I have Subotnick’s other album, can’t remember the name, plus a nice copy of Zero Time. 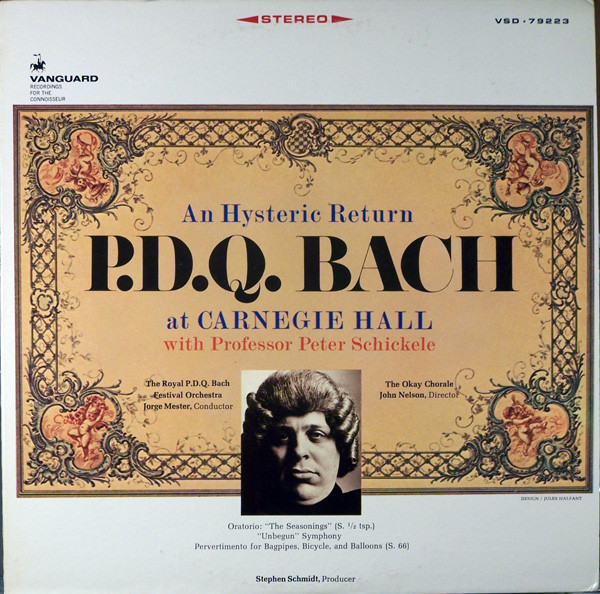 When discussing Bach, it’s all too easy to forget PDQ…

In the early 70s a lot of people had trouble getting the name right. As useful a dream as one of pigs flying.

Incidentally, as a Hollander, surely it is cultural misappropriation to borrow an image from a Belgian? I seem to remember someone saying, and it may have been Magritte himself, that if you start an intellectual discussion about his paintings you’ve missed the point. That was the only legitimate reason I’ve ever had for telling my mother-in-law to shut up and keep quiet. I’m looking for another more permanent reason. I’m sure there were one or two famous Dutch painters, I can’t for the life of me remember their names.

And here’s me thinking it was Jef Beck, all these years