A few pages of excerpt from Mark Waldrep's upcoming publication "Music and Audio: A User Guide to Better Sound" , 20 concise facts about MQA 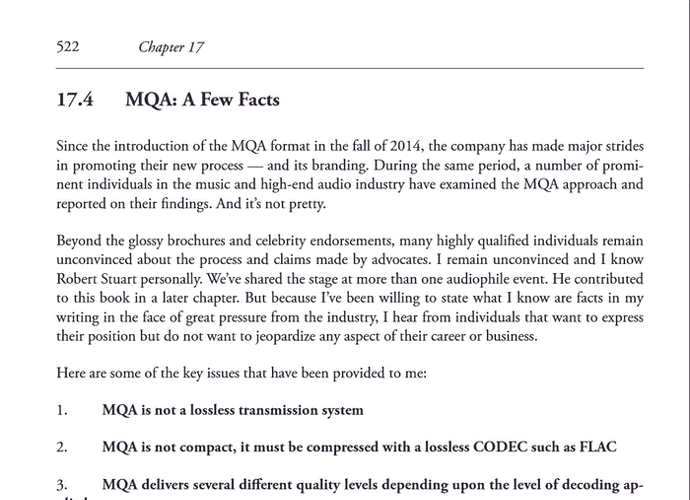 I bought into Mark’s kickstarter, but like so many projects the goal posts have moved from whence they used to be. I hope there is still some good value info this book, but I’m so over the MQA debate without hearing it for myself on a fully MQA stream capable setup that its just another chapter as far as I am concerned.

I think he was entering a competition: “How many half-truths can you fit in a chapter?”

Wow some vitriolic responses here. I read it and thought that it stacked up with my own research. So what are these half truths and falsehoods of which you speak? Btw I have a full MQA decoding system and I use Tidal - so I’d like to think I’m unbiased.

Perhaps you should ask yourself a different question. Was there anything new there? Did you learn anything? What I would like to see in these commentaries is balance. Because what he said could be interpreted as all bad. MQA themselves give a picture of “all good”. We are all sensible enough to know it sits somewhere in the middle, exactly where depends on what matters to the various players, us included. I am comfortable in the knowledge that MQA won’t suit all. What I won’t do is waste effort convincing them they are wrong. I do wish they would afford me the same respect!

Actually there’s nothing new here. If MQA can deliver up to 17 bit 96kHz after it get decoded then an 18 bit 96kHz FLAC will deliver equal and slightly smaller bandwidth then MQA.

The best part is it is immediately compatible with almost all playback devices out there without special decoding method. As for ‘de-blurring’ again there’s nothing special, minimum phase filters have been available for many years, it is up to recording studio and DAC manufacturers to implement it. It looks like there will be more and more people starting to voice up and I foresee it not going to be good for them.

I don’t see any upside with MQA. I’d rather have straight up FLAC that doesn’t demand that I switch off all DSP, etc. I’ve listened to a MQA vs. Redbook of the same album and to me there is a difference but that’s just it… a difference not necessarily an improvement. Much ado about nothing.

If I could play fully decoded MQA with DSP in the chain then I’d be more ambivalent about it. As it is it doesn’t and therefore it actually detracts from my enjoyment. If Roon did the full decode then my Mytek DAC wouldn’t be getting fully utilised.

You can have DSP with MQA. Just not upstream of the first unfold! So there is scope for manufacturers to come up with solutions and I have no doubt they will.

So something like Roon does the first unfold, DSP applied and then the remaining unfolds done by the Mytek Brooklyn (for example) to get the 17bit resolution. Correct? Guess this explains the mammoth thread on Roon doing the first unfold.

Given that DSP can only happen between after the first unfold and the subsequent unfolds, it makes DSP implementation very restrictive. All these have to happen between the ‘envelope’ of MQA processing. So I don’t see any form of DSP from other manufacturer will work unless MQA does DSP processing in their own consoles.

Yes, but the problem with this type of implementation is DSP has to happen between the MQA ‘envelope’, not after going to the DAC. It is in between the two unfolds! Problem with this, what kind of DSP is tolerable and which is not without upsetting the subsequent unfold? We don’t know. For manufacturers to insert a DSP between the two unfolds is very challenging; they need to have all the MQA processing in one black box, everything has to happen inside and not external.

In which case the really obvious question is: is it worth all the time/effort/hassle??

If the deblurring can be apply at A/D stage, and 17 bit resolution is enough, as point 6 said, just pack it into 17/18 bit 96kHz FLAC then everyone can be benefited from improved audio and saving bandwidth without hardware and software support just like XRCD played on Ordinary CD player. MQA just a new cash cow from licensing.

I’m trying very hard to be balanced in my opinion on MQA but I’m rapidly running out of reasons for why its a good idea. Thus, the only conclusion I’m coming to at the moment is the same as yours.

The positive I took out of the pages was that he wasn’t attacking Bob Stuart. There’s enough of that going around. Bob isn’t Meridian. Meridian is majority owned by a pretty large conglomerate and has to fit their business interests.

So, technically, there wasn’t much new - it was a summary of many of the arguments that have been raised against MQA. It wasn’t balanced - but he states his position. He is unconvinced by MQA. So I wouldn’t expect it to be. But I am glad he didn’t take the easy (and lazy) option of shooting the messenger.

Exactly, there’s nothing revolutionary about this technology. It will be justifiable for licensing if it is only way it can be done, unfortunately it doesn’t.

Remember Mark Waldrep is one of the frontiers joined Meridian and Bob Stuart DVD-Audio alliance, I believe Mark making his conclusion about MQA based on technical standpoints plus recording industry ecology.