A Few Topics from New User

At the moment, my music files are stored on a Synology NAS (DS1019+), which is connected via Ethernet to a Linksys router (Max-Stream AC2200 MU-MIMO Tri-Band). I have two basic switches.

I also have a iFi Zen Stream connected via Ethernet. This streamer is connected to a Benchmark DAC2 HGC via USB. I am NOT having any trouble playing music.

My library has approximately 8,000 tracks.

For each of my DSD64 albums, I made a corresponding AIFF album (88.2/24) for my iTunes library. When I set up my iTunes and Audirvana libraries years ago, I added [DSD64] after the name of each folder containing DSD files. Roon generally doesn’t pay much attention to these brackets, but compare the two Marquise Knox Band albums in the following screenshot. 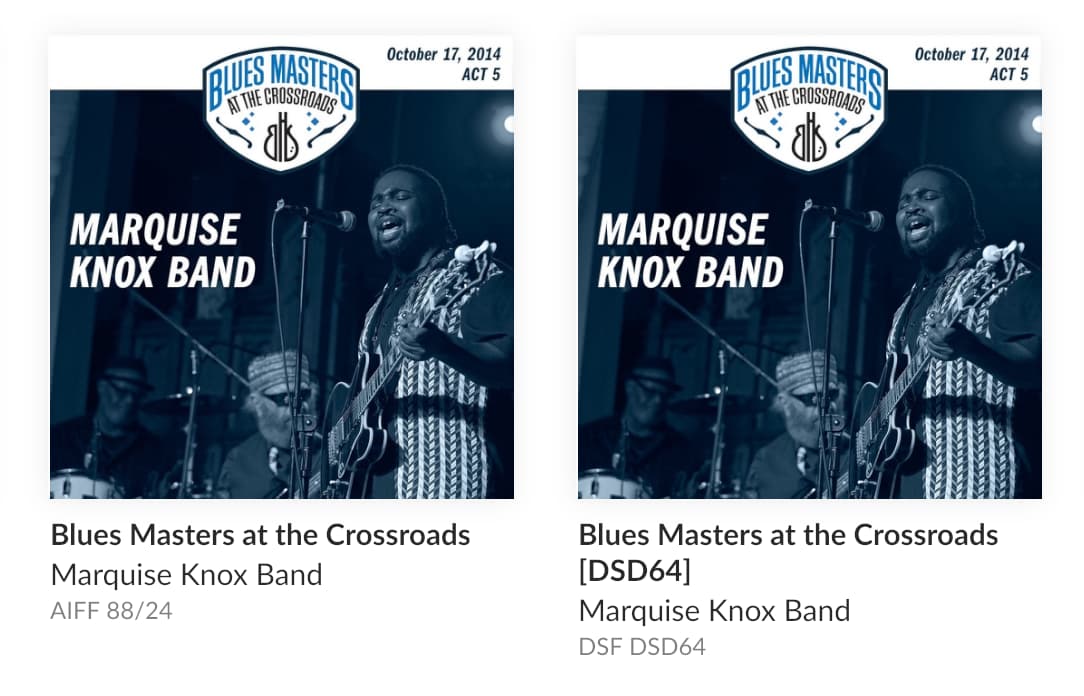 For reasons I cannot yet comprehend, Roon sometimes finds both albums (e.g., Marquise Knox Band; Just One of Those Things), but most of the time, Roon finds only the DSD album (e.g., Count Basie and the Kansas City 7; Love Is the Thing). Please compare the following screenshots.

Eventually, I probably will delete those AIFF albums from my Roon library, but for the time being, I’d like to have both file types available.

On my Mac, each album in the library displays the file type, sample rate, and bit depth, which I really appreciate. Unfortunately, these data do not appear under any of the albums in my library when I’m using my iPad, which is most of the time. Have you all considered showing these data on iPads?

At first, Roon was linked to music files on an external SSD connected to my Mac. To get Roon working right, I had to match a number of albums in my library and fix artist’s names, etc. (“little fixes”). When I linked Roon to the music files on the NAS, I lost some of those little fixes. I didn’t have to reinvent the whole wheel again to get Roon working right, but is there a way to keep these little fixes associated with my music files? I don’t want to lose them again when I back up my NAS to a second NAS. In addition, if all goes well, I want to buy a smaller NAS and have it run Roon Core and store my music files.

You can hide an album without deleting it. Select the album,click the 3 dots, 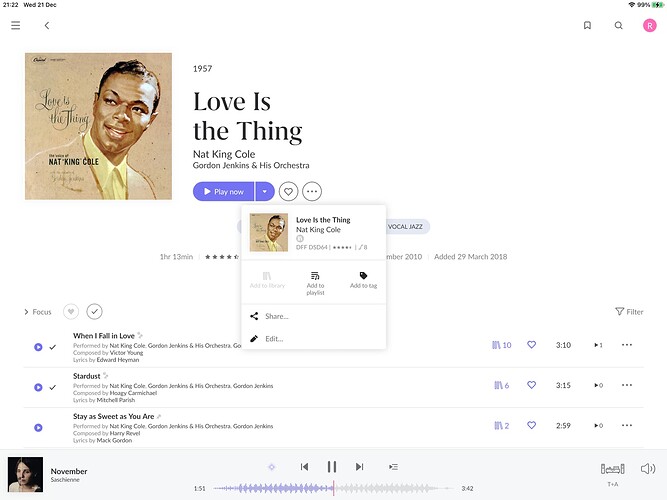 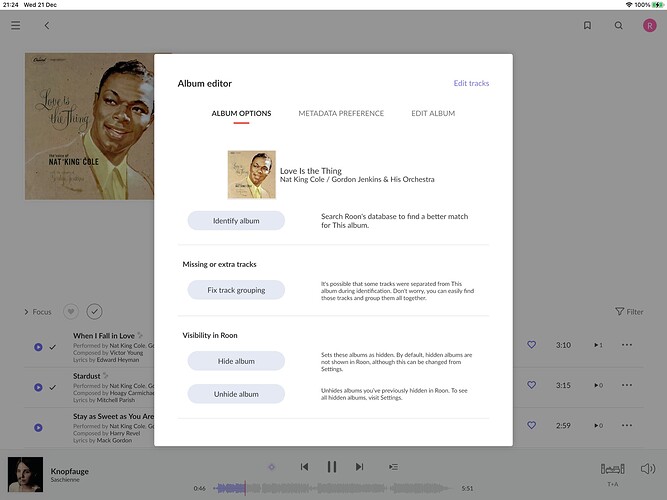 Unfortunately, these data do not appear under any of the albums in my library when I’m using my iPad, which is most of the time. Have you all considered showing these data on iPads? 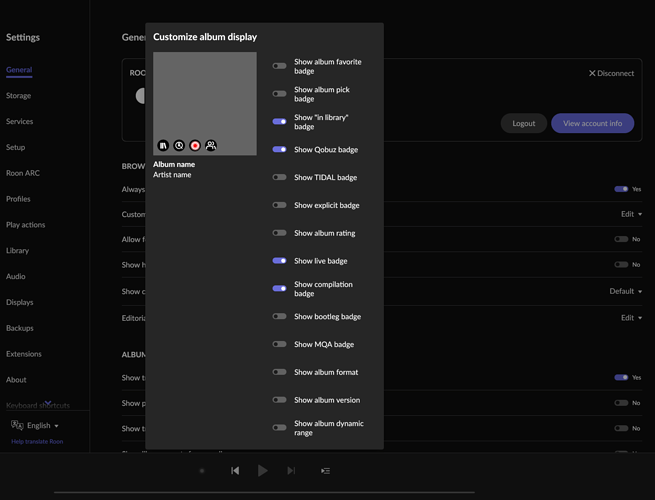 …but most of the time, Roon finds only the DSD album…

On the Album page, there is a Versions tab. If you click on this, do you see both versions?

Your suggestion solved that problem. Thanks.

I used that Hide Album function earlier today to eliminate a straggler from a compilation album. At this time, however, I’m trying to get Roon to find some albums that it should be seeing. Thanks.

Assuming you are referring to the tab found in “Customize album display” under Settings, I’d say the answer is NO. That “versions” tab provides information about some of my albums, but doesn’t locate my missing AIFF albums. FYI, Audirvana finds all of these corresponding AIFF albums as well as the DSD albums. Thanks.

No, that simply displays the version on the cover. I’m referring to the Album page…

See the tab on the right? Click this, and all versions on the album should be visible.

Initially, I thought you were referring to the page with all of my albums. After seeing your example and selecting one album, I couldn’t find the tab that you showed above. When I went into Settings to see if I have to add “Tracks, Info, Credits, Version” so it will appear, I found a tab for hidden albums and tracks. Clicking on that tab worked for my entire library. Thanks.

Do you know what Roon looks for when deciding whether to flag an album as a duplicate rather than a different version? Thanks again.

Spend some time learning how Roon works before posting.

The version tab is always shown if there are multiple versions of the same release, e.g., original release, remaster, regional, SACD etc.

Roon doesn’t hide albums automatically, so this must have been an action you’ve taken.

Precisely. Roon Rocks. Why clutter up the album page as long as every album in one’s library is catalogued?

If Roon sees Square brackets, eg in a folder name it treats the contents as a Version

Its a nest way of adding versions , they will then nest under the version tab

Sorry but show hidden files is off by default on remotes . So it will hide any duplicates by default and show them under versions if it’s matched them correctly. I assume this is what he means as turning it on he could see them.

I agree that the My Library page is looking rather shabby with all versions of my albums displayed. Roon is the first software that I’ve used that hides extra versions. Thanks.

Versions is the third item that I’ve learned is turned off by default on remotes. Thanks.

That information is very useful. Thanks.

I am embarrassed that I didn’t see those tabs yesterday. When I looked on my computer today, those tabs practically punched me in the face. I also found them on my iPad. Thanks.

Sorry but show hidden files is off by default on remotes.

Yes, but the OP needs to hide them first (using the Visibility option.) That was my meaning. But maybe we are at crossed purposes?

You may explicitly group releases, but I don’t think this is reversible any more.