This album is not available in Roon. I’ve added it yesterday in Tidal and restarted Roon a few times to make sure all is in synch but still nothing

what’s causing this? How do I get it in Roon? 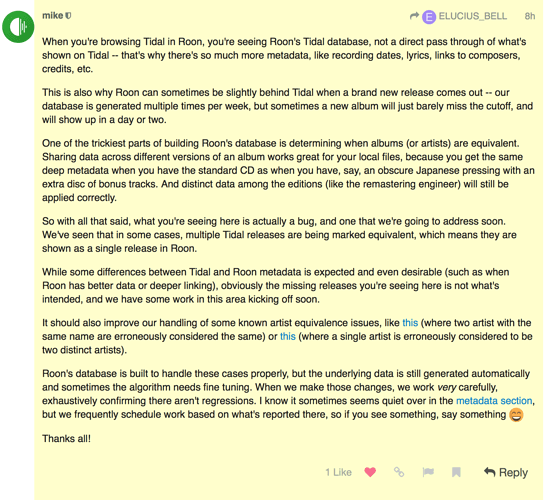 New Coldplay album has appeared in Roon now for me - but it is a favorited album and hasn’t appeared in my list of albums in Roon. Tried removing it from Tidal and then adding through Roon - the album reappears in Tidal but still doesnt sync back to Roon. I’ve seen something similar before - it eventually sorted itself out but it is frustrating. Anyone got any ideas or seeing a similar issue?

Yes it’t there now… But pushing the add to library button does nothing??
I don’t get it. I faved it in the Tidal app so I figured that it would simply appear in my albums in Roon as well.

Hi Andrew, That did the trick - one for the future!

So the new Coldplay Album has now appeared in Roon but I cannot add it to my Library.

Anyone any ideas why?

Brought your post here, try clearing the Tidal cache as above.