A question about hardware

I am considering the purchase of a Meridian 218 which my local audio dealer (and a Meridian rep who happened to be in the store when I dropped by) confirms will act as a Roon endpoint in a second room of my house where my primary stereo is located.

The dealer says the 218 will require a hardwired ethernet connection. My plan, which the dealer believes will work (iIknow there is no certainty until I try) is to add an Apple Express in the second room and to hardwire the 218 via ethernet cable to the Apple Express.

But…Music Direct is offering a Bluesound N100 (on close out – I know it is not the most modern Bluesound device) at $299. That is much less than the Meridian piece. While it may not offer the identical sound quality as the Meridian piece, Music Direct believes it may allow me to do the same thing. The Blue Sound would be configured as a Roon endpoint.

I understand no setup is guaranteed until I try it. But I wonder if folks have opinions about these two options.

I might be wrong but the Meridian stuff isn’t running RAAT, Roon has a compatibility layer for it similar to Sonos or Squeezebox’s. This means no zone syncing if you are looking for that.

Thanks. Unfortunately I have no idea what any of that means. The Meridian dealer knows exactly how I intend to use this and he knows I will bring it back in 7 days if it doesn’t work for a full refund. So I think it unlikely that he is being less than truthful about what the 218 can do.

I believe the Bluesound has multiple zones but I don’t know if they will sync or not.
Check their website.

Sorry, but again I just don’t understand some of the terminology that is obviously basic to others. By “multiple zones” I assume you mean two rooms. But the Blue Sound need not play in two rooms; only one.

What is meant by “sync”? With an endpoint in another room, Roon won’t let me choose that endpoint as the location to play the MQA files?

Sorry to be so ignorant but many folks like me who want to use Roon just don’t have the technical knowledge many of you have.

Sorry, I wasn’t discounting what you dealer said, I was just trying to give you some additional information.

What is meant by “sync”? With an endpoint in another room, Roon won’t let me choose that endpoint as the location to play the MQA files?

Playing to both zones at the same time and having them in sync with each other.

Thanks! It is not my intention to “play to both zones at the same time.” That might be a nice additional benefit, but it’s not what I am mainly after. Rather I want a way to play MQA files in the second room.

If you are considering the N100, I would contact Bluesound and make sure that the unit can be (is) updated and is MQA and Roon Ready.

@Greg that’s a good idea. Unfortunately the Bluesound web page shows no method to contact them directly. Folks are referred to their forums page.

Music Direct did confirm that there is a firmware update for the N100 to work with MQA. Music Direct suggested I “check with Roon” to be sure the N100 is “Roon Ready.” ~sigh~

The N100 is still being updated, plays MQA and is Roon Ready.

There is however an as of yet unresolved issue with playing MQA from Roon. This will be fixed in a future Bluesound firmware update, but no timeframe is available as of yet.

Having owned both – the N100 is pretty good at what it does. The 218 however is quite a bit better (both analog and digital) – and supports MQA from Roon out of the box. Whether the price difference is worth it is up to you to decide.

Go to this support Bluesound page and click the question mark at the bottom right of the page. This is how I see it on my iPad. 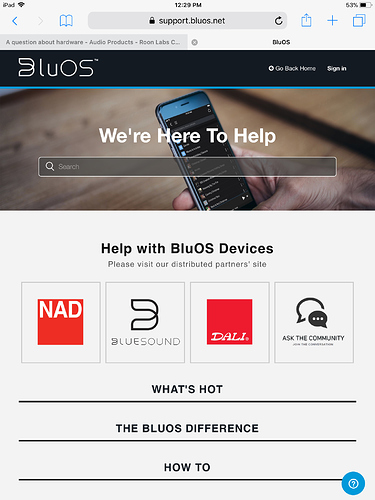 @Greg and @RBM THANK YOU both so much!

Meridian zones will sync with other Meridian zones, so the 218 would allow the addition of a Meridian MS200 in another zone to sync up in future if you look to expand. MQA unfolding is coming to Roon at some point also.
Just FYI as I understand it.

@Chrislayeruk thanks. I wish I understood the “zone” thing. Again I have two rooms. In the first I am already getting MQA quality through Roon and the Meridian Explorer DAC. As I said, it is less important to me that am able to play those files simultaneously in both rooms. It is more important that I can play those MQA files in the second room, even if they can’t be played simultaneously.

I wish I understood the “zone” thing.

A zone is a music playing endpoint. Presumably there is one in the current room and one you are trying to add. If they use the same technology, then you can play the same music to them at the same time and have them be in sync.

Zones are just different rooms. Some people want the same music playing all over in sync. That’s it. Explorer and 218 will do what you need nicely with Roon.
Worth taking time on the Roon Knowledge base.

If out of the box MQA is what you want then go with Meridian, no point in trying to save a few dollars only to add potential hassles, imho.

You might want to peruse the Knowledge Base; for example, the entry on Zones. It might help you in learning what you’re letting yourself in for

Thanks everyone. I had basically decided to go with the Meridian 218 and it is on order by the dealer. But…the price difference is more than a few bucks. With the Music Direct sale (which is on one N100 unit only, so it may be gone by the time I make up my mind) the difference is more like $800. Of course part of the advantage is one gets a Meridian DAC that is built into the 218.

However…as my knowledge is clearly limited (and I often don’t even know WHERE to look on the Roon knowledge base for what I need) and my patience for hassles is limited, the Meridian may still be the best choice. @Rugby you are saying setting up the Bluesound may be more complicated?

I’m saying that as of now there are some issues playing MQA from Roon to Bluesound. I’ll refer back to RBM’s post:

There is however an as of yet unresolved issue with playing MQA from Roon. This will be fixed in a future Bluesound firmware update, but no timeframe is available as of yet.

Given that there is no time frame for the fix to come into place, and that MQA was the main reason for this, I suggested going with the best option at this time, imho.

However, if you want to buy the Bluesound, and wait for the fix, you certainly could do that; but, you would have to be using the Bluesound app to listen to MQA, not Roon.