A Revisit of Comparison Between TIDAL and Qobuz

Here’s a visual comparison of a 38-disc box set (Von Karajan’s Symphony Edition): one set added to my library from Qobuz; the other (identical) set from TIDAL.

I found the disc with Beethoven’s Ninth on it (because I just came back from a live performance). First, here’s Qobuz: 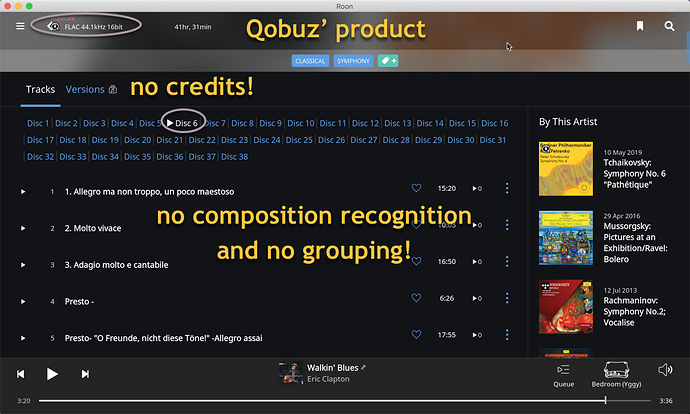 Good luck, end users, associating the music with ANY attributes like Work names, Composers, etc., and metadata. ZERO credits! Perhaps you get a better experience from Qobuz if you bought the box instead of “renting”, but then, who would try? 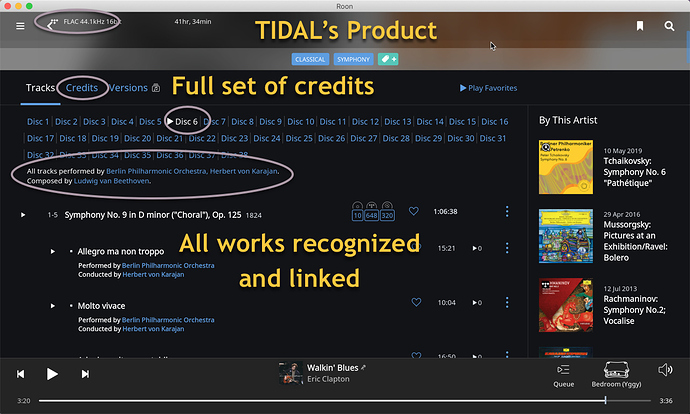 All compositions, on all 38 discs, fully recognized, credited, and linked. Not bad for a streamer known for pushing hip hop and rap.

An old topic I know. But just think of the man hours required to bring Qobuz up to par with TIDAL. [No judgment expressed about relative SQ of the two volumes.]

I really don’t know, but maybe Qobuz is working on it. Lately I see albums with work & parts, instead of just a track listing: 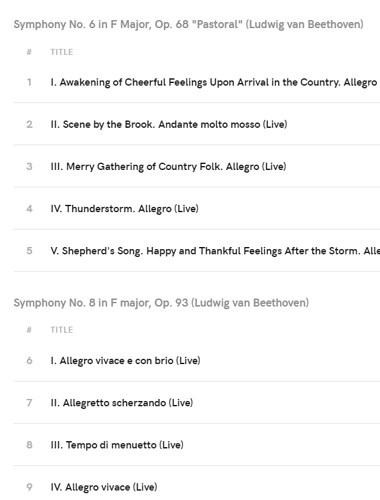 It’s a known issue, and apparently a knotty one.

@support, I have tried reporting this issue numerous times as have many others. When adding an album from Qobuz, almost all metadata is being missed by roon. This information is clearly available using the Qobuz apps but not with roon. This is an easily reproducible general case and affects large numbers of Qobuz albums. It seems to me a very basic issue with the way in which the Qobuz integration was done. It is difficult for me to understand what the point was in tweaking the search performan…

@John_V. We recently rolled out some new Qobuz import code and, mea culpa, there was a regression where we failed to import the composition name (where it exists for a track). I’ve just fixed this bug and, while I can’t guarantee that it will fix all of the metadata for this album, there is likely to be a significant improvement. It will take a few days to show up in the live metadata.

Thanks for this specific report – it allowed me to hone in on the bug really quickly. In general, there are a lot of things going on with metadata processing and “problems” can arise from many different things. Please keep these reports coming!

This fix is now live and, whilst the track titles are now as they should be – composition name + work part – this hasn’t helped composition identification for the Von Karajan Symphony Edition. We have some ideas on what we can do here, and we will implement them as soon as we can, but it’s not something we can change in an afternoon.