A specific question on Album Sorting

I’d never heard of Roon a week ago so I’m on a bit of a steep learning curve prior to activating a trial. I have one very specific question on sorting which is pretty critical to me.

I’m a bit old-school and still think almost entirely in terms of albums/CDs. All of my music is now FLAC, ripped from physically purchased CDs, and accessed via Logitech Media Server (LMS) controlled with the iPeng remote app on my iPad (this has been my setup for well over a decade now).

When browsing my collection I almost always use LMS/iPeng’s album view with very specific sorting so that the thumbnail display of my CD collection in iPeng (the remote control app) reflects how I had my physical CDs ordered in the old days when they were on shelves in my living room, i.e. the albums are grouped alphabetically by the artist’s last name and then within each artists’s group of albums they are ordered in ascending chronological order of release date.

To accomplish this in LMS I use an LMS custom sorting tag called “albumsort” where for instance I tag all tracks in Hunky Dory with the albumsort tag “Bowie, David, 1971”. When in album view LMS uses the albumsort tag if it is present to override the default sorting so as long as it’s applied consistently to my entire collection the above enforces my desired perfect “cd rack” ordering.

Is something like the above possible in Roon, either as a sorting option already built in or by a user-definable sort tag such as Logitech Media Server’s “albumsort” tag?

You can configure Roon to display by Album “release date” or “added date” in the standard settings which I think is what you want.

If the metadata tag is missing or wrong though, you can also edit each album to your preference, so then the above mentioned setting will order them the way you want.

I hope I understood your question right. 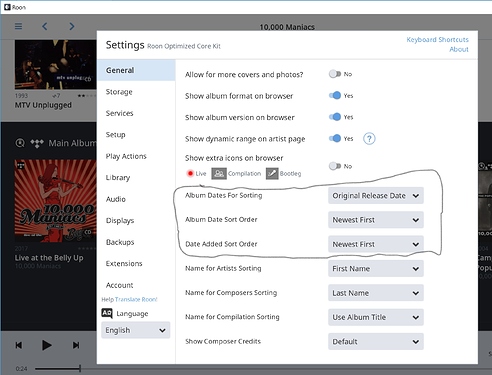 Thanks Dave & Scott. I think I might be getting there. I also found another thread here (Is it possible to list albums by artists and then album title alphabetically?) which, together with what you told me, seems to indicate that I am almost certainly OK. 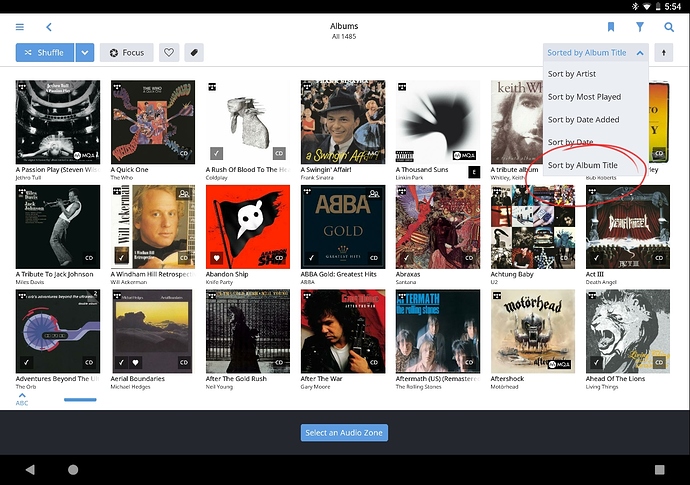 From that drop-down where the poster highlighted the last item I presumably select the first (“Sort by Artist”) option and from reading that other thread the default second-level sort (in fact only second-level sort option unless that guy’s feature request has been addressed since that thread) then seems to be to sort albums within the artist groups by date which is exactly what I want anyway and doing what you two showed me in Settings>General will get me the chronological-order sorting within the artist groups that I’m looking for.

If the above is right then my remaining question is, on that Settings>General page that you Scott posted a shot of, is the “Name for Artists Sorting” setting (the one immediately below the ones you circled) also used by the album browser when it is set to “Sort by Artist”, i.e. can I enforce that sort to be by last name not first name, or is that Settings>General option strictly for sort order when in the artist browser?

By the way, the reason I’m not simply trying this for myself is because my audio system has broken (after 24 years - not a bad run!) and my new Roon-ready equipment won’t be delivered until next week at the earliest. With the relatively short (in my opinion) 14 day trial period for Roon I don’t want to start the clock ticking now and then at best have used half the trial before my hardware arrives or at worst if there is a delivery delay have the trial expired before I can even test it with my new hardware. I’m trying to get a bit of a head start with a few questions here.

I think you’ll be fine. 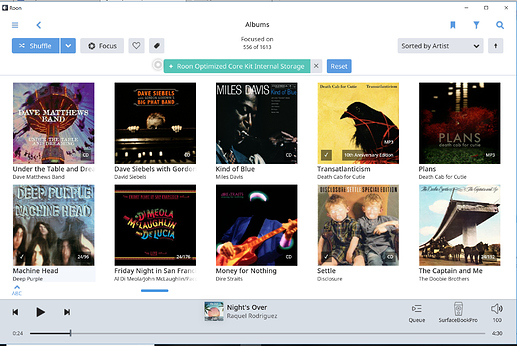 2019-07-03 (3).jpg3005×2013 1.15 MB
Here I changed artist sort order to last name, viewed by album, sorted by artist, and further limited the view to just albums I own.
Don’t be too concerned about the limits of a 14-day trial. Many people ask for another two weeks and have that granted. Roon knows it takes time to get a suitable understanding of what Roon will do. They just don’t want to get screwed.
IMO, Roon is the best investment I’ve made in my music system in many years. it has truly changed how I enjoy music. Enjoy your new system and don’t hesitate to ask the Community if you have questions you can’t find from the Forum.
1 Like
Julian July 5, 2019, 10:41am #6

Thank you Scott. That was a very helpful experiment. I really appreciate you taking the time to do it.

I did notice that Dave Siebels wasn’t where I expected (personally I would have put that under “S” in my hypothetical living room CD rack that I’m trying to emulate) but clearly the sorting is working as expected and exceptions like that are judgement calls on particular tagging and could be fixed up as required by a user-tweaks for specific tags. Sorting really can be a judgement call, e.g. I called out Dave Siebels for being with the "D"s yet I would agree with the “Dave Matthews Band” being there. Taj Mahal (“T” or “M”?) was one I dithered on a bit in my collection.

I’m definitely getting excited about getting my new setup and taking Roon for a spin. I am completely open to the possibility that after adopting Roon I will find myself interacting with my music library in very different ways and my determination here to maintain my living room CD rack view of my music might well seem absurd and anachronistic to me after a while (perhaps quite a short “while”) but none the less it is good to know that I can maintain my current behaviour if required even if that ends up only being a temporary comfort blanket that I will discard as I adapt to the new possibilities.

P.S. I smiled when I saw Machine Head in your screenshot because I probably wouldn’t be on this forum if it wasn’t for that album. Decades ago now as a frightened 12 year old who had just moved to a new boarding school I was totally disinterested in all music until I made my first friends at the new school who were passionate about music and at the time had a record collection consisting of just two LPs - Deep Purple Machine Head and Black Sabbath Paranoid. We played those two albums constantly and those were the two albums that kick-started my love of music that has been pretty central to my life ever since. Not only a very helpful post from you but also one that brought back some fabulous memories.