It would be great if we had the ability to select / rank tracks according to play count.

For example, ‘Least played tracks’ or something along those lines could be added in the menu options available in ‘Played in the last…’

I love Focus and how it allows me to filter / search through my tracks and of course Bookmarking them. The ‘Most played’ option is nice but the inverse would also be great (if not even more useful in my opinon).

This way we would be able to discover tracks that have not been played in a while. 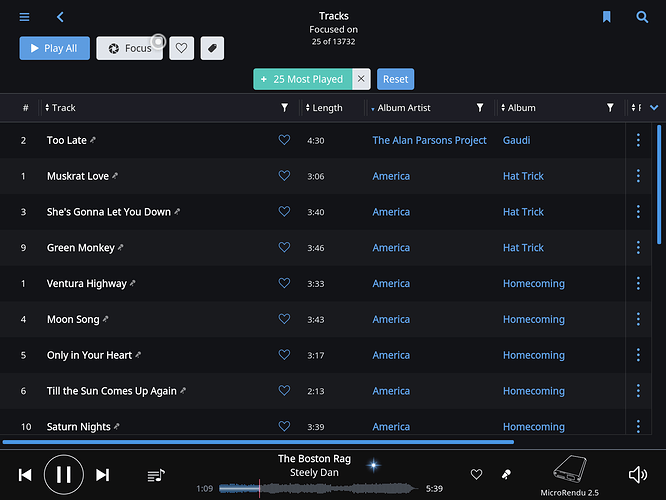 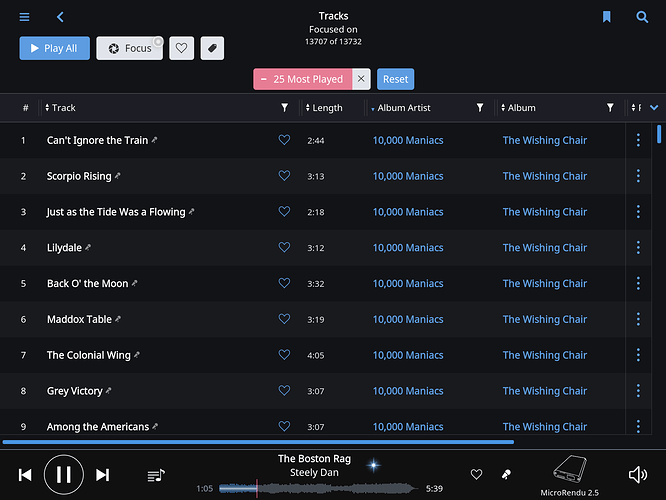 Learned that trick at a Roon presentation by Computer Audiophile’s Chris Connaker, and Roon’s Rob Darling…

You can also invert the “Sorted by Most Played” view using the arrow toggle immediately to the right of the Sort menu. That will display Least Played first.

Hi Robert and many thanks for highlighting this, I have actually tried it but it seems to do something else (please correct me if I am wrong):

‘25 Most Played’ with a minus sign in front seems to remove the 25 most played songs. This is indeed useful but I cannot find an option to select the 25 ‘Least’ played songs. Do you know if there is a way to do that?

That would be great to have as it would dynamically discover the music you have not played in a while.

Many thanks for pitching in

I assume you mean the sort by play count on the toolbar. This is indeed great but it can only be set through the PC (no smartphone option I can find) and once I exit, it reverts back to default.

The ideal would be for the ‘sort by number of plays’ to stay set. In this case tracks would automatically / dynamically rank according the number of plays.

The tracks I highlighted as least played haven’t been played since my last focus reset. Andybobs method may be more specific. Not a feature I use much, but focus does a lot of things…Tinker with it, and see what you find. My least played are all zero plays, with 10k Maniacs being the first artist listed in my library.

I must confess I was thinking Albums rather than Tracks, but a persistent Play Count for Tracks is a good idea. Some sacrifices had to be made for Phones and it looks like Playcount was among them. It’s there on iPad.

A ranking of tracks by play count (set via PC / iPad) would be awesome :-).

Let’s flag @danny and @mike and see if some of the reduced functionality on the phone apps in Tracks might be ameliorated by having a ranking selected on a full Control apply persistently as a default on all Controls account-wide.

May or may not be technically feasible, but it is a very interesting suggestion.

Using Focus doesn’t seem quite right to me here – the “x least played songs” are generally all going to have 0 plays, unless you have a really small library.

On desktop or tablet, you’re better off focusing on “never played” (meaning excluding played “all time”), and for tracks you can also add in the column for Plays, setting the sort to be ascending.

That said, adding some flexibility to the tracks view on our mobile app is a good idea – I’d like to see customizable columns there, and perhaps even Focus in the future. I can’t make any promises on when this might happen, but we’ll discuss.

Thanks for the feedback @Yiannis_Kouropalatis!