Below are my findings after 6 month roon usage. I hope roon team will fix the whole composition handling. As it is today, it isn’t in a very usable state (better than nothing, but also very time consuming to maintain).

Behavior of the system

I have noticed three different behaviors when maintaining the metadata for composers if no composers are added during identification:

There are four different states how a track is being handled by roon:

Multiple composers who are in fact the same person

This is a problem which is not only a problem to roon. Two different conditions can be observed:

I don’t know where the difference is in meaning, but in 99% of the cases roon will not change the composition behavior if a writer is manually turned into a composer in the tracks. So, when you see a writer popping up, in one or more of the tracks, this album cannot be maintained completely.

musicbrainz (where Roon sources some of its metadata) uses writer when no more specific information is available about the creator’s contribution. The musicbrainz hierarchy for work creators looks like this: 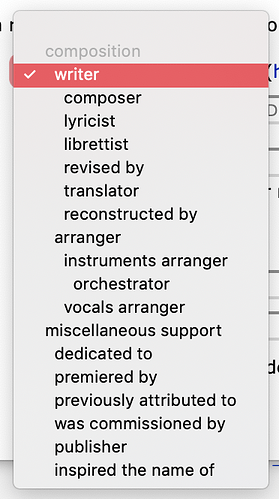 I think Roon doesn’t use a hierarchical model below the composer category btw.

As for getting data right – from my point things should happen at the following places (in particular order):