I write here a general post about other alphabets. in particular my problem is with greek alphabet (i’ve got quite some greek music…)

so my problem here is that what i see in roon is generally a mix:
-i can get greek or translitterated (latin) alphabet at track, composition, and artist level
-it happens that the title is in greek alphabet and the composition is translittereted…

these 2 examples are from identified albums with NO file tags (except track title, but with settings to prefer roons title). so i suppose the metadata are by roon.
but i have a lot of tagged albums (with composer and WORK), so i’m not really sure what comes from my tags and what comes from roon metadata.

i’d like to know from roon staff if there is a general behavoir in roon software. and if there is a suggested tag scheme for these situations.

a good option would be to have the composition in greek and the track title in latin.
i don’t know.

I have to look up Greek tracks for my Greek, computer illiterate, wife and as a non Greek keyboard user I’ve found all of the streaming, metadata, online shop services a mess for finding Greek tracks, artists and albums.
I see roon doing as good a job as any of them.

Finally, i am retagging my greek files.
Basically, i’ve seen that roon metadata are actually in greek alphabet, so that to obtain a correct identification, you have to tag in greek.
or, more precicely, as my files were tagged in latin alphabet, there was a conflict.

anyway, retagging has been not so difficult: in fact discosg is “perfect” on greek metadata, so i more or less automatically retagged via discogs.

after that, i had to identify albums in room, but it worked plainly.

my only choice has been to edit artists names in latin … for searching purpose.

so i more or less automatically retagged via discogs

I use generally for tagging 2 (windows) softwares:
mp3tag
foobar2000

both have a plugin that allows to automatically tag files getting metadata from discogs (and other sources…)
so, i simply had to edit the album in mp3tag, search the album title (in greek) and after that all the tracks are tagged with greek title. (i use then to create a WORK tag with the title of the composition in greek).

keep in mind that this procedure changes also the artist tag with the greek name. and that’s ok. i then edited the (identified) artist name using his/her romanized version.

Thanks, does mp3tag do batch tagging or is it still one album at a time i.e. apart from retrieving the metadata it’s essentially manual?

with mp3tag you have to do it one album at a time.
i think that with foobar you can do it batch: for some reasons, the plugin does not work for me: it used to work perfectly, but…
in any case, discogs has in general A LOT of different releases… so i think that if you have some kind of control on the tags … it’s better to do it album by album…

Thanks, I’ll give it spin and see how it goes. I’m used to puddletag’s masstagger which shows you which files and fields will change and you can deselect a file and /or any combination of fields to avoid those changes being written whilst keeping the stuff you want: 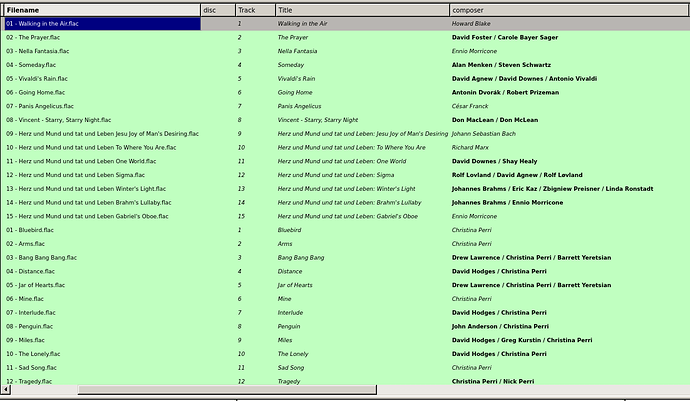 Pity its discogs implementation is for all intents and purposes defunct so I can only leverage musicbrainz.