About identifying albums ... a real plea from the heart

I am slowly getting into the mindset of using the automation available to me rather than laboriously retagging stuff. It’s a HUGE boon.

It takes time for us some of us luddites to let go of the “old ways”, and it’s highly important the work Roon is doing to take the drudgery out of this hobby. I am nearly there with my goal of ignoring discrepancies in my extensive collection because of the overwhelmingly +ve system we now have in place with Roon.

I think the “Identify Album” feature is thus one of the most important features within Roon and is the heart of the ethos of minimising manual input.

I would strongly urge Roon to have a look at the way this is implemented as, with a small couple of tweaks, it could be fantastic.

Currently I have around 700 of 8000 albums which remain unidentified and, for the ones I have been checking and trying to manually identify using the Edit album feature, I notice they remain unidentified mainly due to discrepancies in track listing order and timings.

I have a 4 disc/album set of Fleetwood Mac rumours, but for the life of me I can’t even identify this basic of all Rock albums because of track discrepancies. There are 17 versions of it and none correspond. It really is on my life’s too short list to painstakingly use the up/down arrows to frustratingly try and put the tracks in order. It’s like one of those puzzles where you have to slide round those squares for hours trying to get them in the right order! 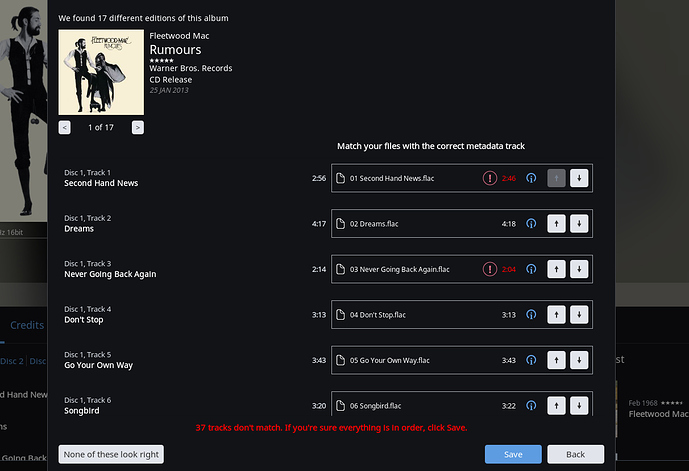 Thus, for unidentified albums, on the whole, the tagging in my files is correct in terms of tracks names and such, so it would be GREAT to have a selector button in the manual identification procedure to “Keep existing track data” That way, we can manually identify albums, with Roon using best match for albums, and adding credits, album art and bios, etc from the Roon-base, and uses track data from file tags.

Then we could use the focus aspect to highlight all unidentified albums and manually identify them in one fell swoop, setting Roon to ignore track discrepancies.

I guess then out of 8000 albums, only a handful will truly remain completely unidentified as real oddballs. You could even put in a Focus criteria as “Manually Identified” to differentiate to those albums which are Auto-Identified.

I have a 4 disc/album set of Fleetwood Mac rumours, but for the life of me I can’t even identify this basic of all Rock albums because of track discrepancies. There are 17 versions of it and none correspond.

This is a really good example. Because it is a very popular/classic album, there are so many versions (Discogs has 290 listed). It’s therefore very likely that Roon won’t have your exact version.

For most albums in my collection, it’s very rare for Roon to have the exact version that I have. Originally that bothered me, but it does not anymore. 99% of the time, there will be a version that has the same track listing as my album, and that will be good enough for me, together with a few notes in the VERSION field. I find I can ignore track time inconsistencies - makes no difference at all.

For the small number of albums where I cannot find a Roon entry with the same track listing, I will just tell Roon to use the track number and title from the file tags. This will put the tracks in the right order and list them all. It’s far better than using the (very slow) method available in Roon to re-order or add tracks.

The only problem is that I still have to then go through albums one by one (700 or so in total), to manually identify then edit to force Roon to use the file versions of the track titles.

My goal is to really eliminate the leg work in this regard when dealing with 100’s or 1000’s of albums.

However for key albums, it’s an excellent idea to avoid the puzzle shuffling method

I understand your pain here. I worked through about 2000 of 30000 unidentified albums.

99% of the issues were as you describe with the Rumours example.
The cause was generally that I would have tracks 1-60 instead of 1-20, 2-20, 3-20 etc. Your Rumours screen shot doesn’t seem to have any disc number, but, the deluxe release came in 4 discs. So, we have to help Roon match that.

Many of these for me were caused by how I had ripped and tagged albums originally for Squeezebox and then Sooloos.

The fix for me was to do a 30sec fix in mp3tag to just add disc number properly and renumber the tracks so that track 21 is track 1 of disc 2.
Doing this in my tags means that any future install of Roon would automatically pick up and match with no further effort. (I alpha test Roon so I blow away databases fairly often)

Using the Roon versions in album match was often a really good way to confirm what the album should look like if I were to rip it again today.

Rumours is being listed as 4 discs.

I thought this protocol was OK?
And the discs are appearing as such, prior to manual identification…ie:

Here’s a couple more of easily found albums with manual identify, that a “use file date for tracks” feature would easily help with. The point is, with what I am suggesting, so many of these albums could easily be identified automatically en masse, without having to go thru them one by one: 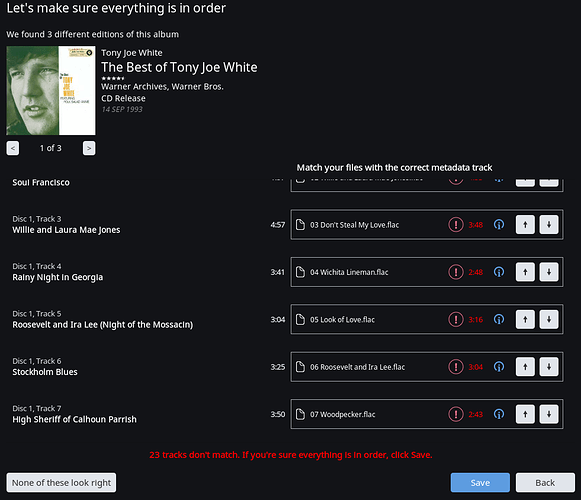 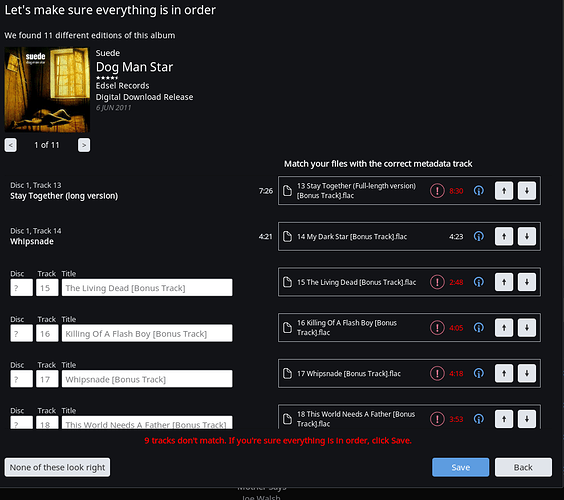 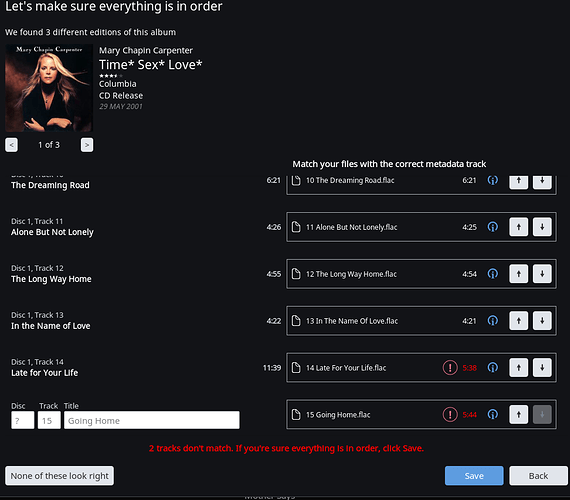 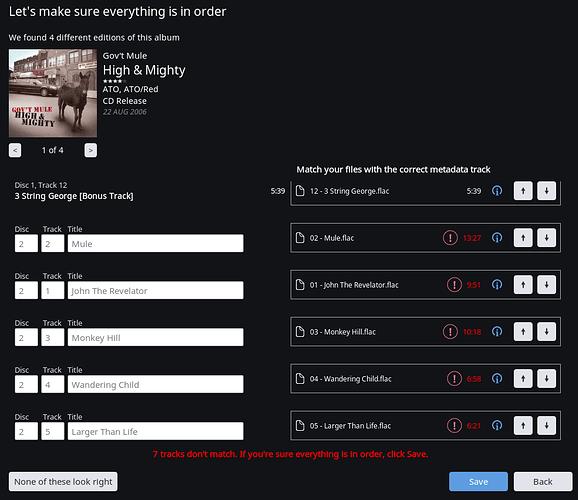 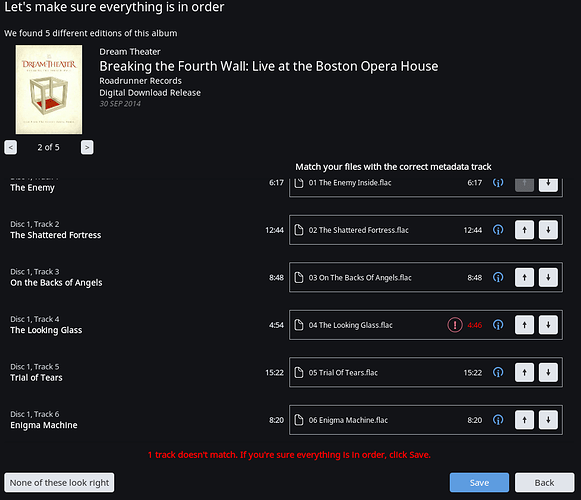 I asked some time ago a redesign of disc identification that I found uncomfortable and slow. In the meantime when I have problem with identification and track listing I identify the album and then I tell Roon to use track title and/or number from tags.
Not so smart, so I agree with you that a “keep extisting data” selector and the “Manually identified” criteria in focus would be great!
Obvously a more user friendly idefintication procedure would be even greater…

I agree with the fellows. Maybe an approximate filter could give us more control. I have a lot of well known albums with a small difference in song duration. They could be identified with a question mark.

I am a music devotee and a Microsoft Certified Developer , it seems a mismatch but …

I can see Roon’s problem, especially Classical as I keep hammering away at in other threads

Basically computers are stupid , its only the code that makes them intelligent.

I see the problem with Rumours , its been re-released, remastered so may times (I can believe 290) how can you find a match.

I don’t know Roons logic . Certainly other software does some form of CheckSum of track timings (add up the Minutes , Seconds and Decimal Seconds of each track of an album) and look for a match in a database of some sort with Tolerances ie Plus or Minus 5 Seconds etc, You get the idea. With an album like Rumours getting a match is nigh on impossible

In some ways the more obscure an album , the easier to match , there is only ONE Version to match

We as a user group I believe should chip in ideas NOT criticism , think how we as a group can enhance the product by suggesting ways around the problem. I hate to call it a big family BUT,…

I don’t want to manually adjust metadata but if that’s what it needs so be it , provide a means to do it maybe . Composition and Composer Merging is a good example

It really is on my life’s too short list to painstakingly use the up/down arrows to frustratingly try and put the tracks in order. It’s like one of those puzzles where you have to slide round those squares for hours trying to get them in the right order!

That’s why I have abandond this feature totally. Like you said It so painstakingly frustrating to use. I still have 895 unidentified albums. Corrected about 30 of them using this tool. Took me a whole day and so much frustration I decided to never ever do that again to prevent myself of going mad. So yeah,.I also hope they look into this.

Hey here’s one that hasn’t been mentioned thus far (but I could well be mistaken):

While allows one to merge albums, it does not allow one to merge metadata. Could make for an interesting feature request - the ability to chose multiple matches when manually identifying an album.

I am doing the time consuming job one artist at a time (See my thread on “show us your music collection in Roon”).

Your attention to the folder structure helps when it’s a simple 2 CD set. It’s the titles with non-CD discs that takes some attention (layers w/different mixes and resolutions).

For Super Deluxe boxes I start by finding a potential version match (often can do that) and the taking a peak at how the metadata is organized (i.e. album stereo are tracks 1-10, 5.1 mix is tracks 11-20 or disc N if not just a different layer). I then fix the disc number and renumber the tracks to match. I can then “indentify” correctly. I don’t try the up/down arrow game unless it is really easy. Otherwise that can be way too much time.

When there isn’t a match I pick the closest and edit the key fields like Mastering credit, Version and release date.

I don’t worry about my entire collection of xx,xxxx albums. I just try to work on one artist at a time as I am interested. The ones with Deluxe editions and many versions need the most work.

Since I often view my collection one artist at a time I can feel a sense of “correctness” by fixing an artist and not worrying about the others. Taken in doses it can be fun. I like getting the old CDs out and exploring the various versions I have and then seeing the collection by artist or sorting by tag like “DCC Gold CD”.

Here is an example from Fleetwood Mac (I need to sort the 3 different needle drops of Rumours). 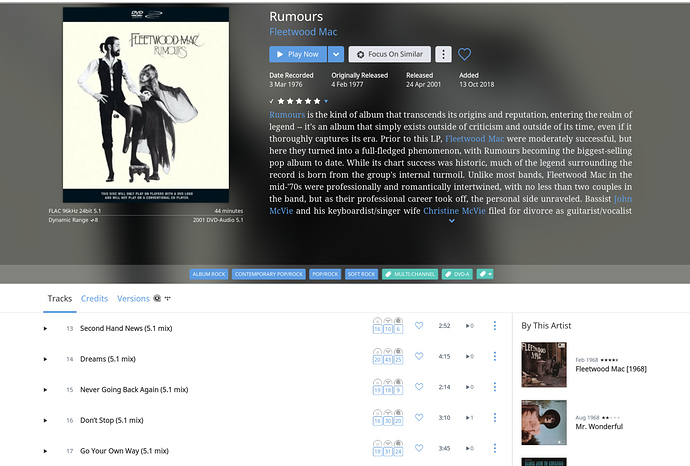 I am impressed with just how many Roon gets right…

Merging albums , splitting big sets into pseudo albums is the road to pain

If you leave a big box set as is Roon will probably recognize it, split out the 114 cds as discs and Roon may pick up some but invariably not all

Especially in old recordings where the release was vinyl, 50 mins not cd 70 mins. The “ fill up the disc” causes the issue

I am down to 16 real odd balls un IDed, I took out lots of big boxes and manage them separately, I keep just the split cd that Roon can ID in my Roon library

I don’t worry about my entire collection of xx,xxxx albums. I just try to work on one artist at a time as I am interested

actually ive given up with trying to curate within roon. I make changes to folder structure and such and roon sees some albums afresh. I know it shouldn’t but it does. It’s really alll been put my LTSL (life’s too short list), hah! I just let roon do its own thing and live with it as is.