About those “Automatic Updates”

Hey @danny … Luckily, I did not experience any trauma while updating ROCK on my NUC8i7BEH with OS 220, 221, or 227 but the update process did indeed occur these 3 times without any consent on my part. When accessing settings > about, the updates downloaded and then momentarily presented the expected update needed box, which disappeared when the update executed without my consent. This is not the behavior I remember during past updates and is at odds with what you stated (in one of today’s many posts) should happen. Just thought you should know that the folks who were having trouble today were not the only ones who saw the updates happen “automatically”.

Roon OS doesn’t update without a click due to legacy reasons. If this happened, I’m very interested in knowing how to reproduce this.

Are you sure it wasn’t Roon?

Yup, same here. Rock running on a NUC. iMac as client. Check “About Roon” in that client; Rock spontaneously starts to update - no further click required.

Oh yes I’m sure. I was surprised as I don’t remember it being this way. When I saw on the forum that an OS update was available last night, I went to the settings > about page on my iPad (build 571) and noticed that the new os was downloading, I expected to have to click to actually update, but as soon as the download completed, the update dialog box appeared for less than a second, then the searching for core screen appeared while the nuc was rebooting. Same behavior on the 2 subsequent updates today, once on an iPad, once on an iPhone.

Me too Danny. I didn’t click anything but when I tried to listen to some music, the update had already been downloaded to my Nucleus and now I can’t get anything at all. I’ve been in touch with Dylan about this but I’d like to be able to hold off on updates until I know they’re ‘ready for prime time.’

It’s now been over a day since I’ve been able to listen to anything on my system.

I had the same thing happen about 5 minutes ago – ROCK installed builds 221 and 227 within a few minutes. The system does now recognize the Roon core, but I experienced several minutes of anxiety and confusion.

I think the below config setting is causing the automatic updates…

Mine did not auto update it downloaded itself as is normal but had to click on install dialogue to actually install it.

My setting is stable, it asks me to confirm download and update.
Everything good here. 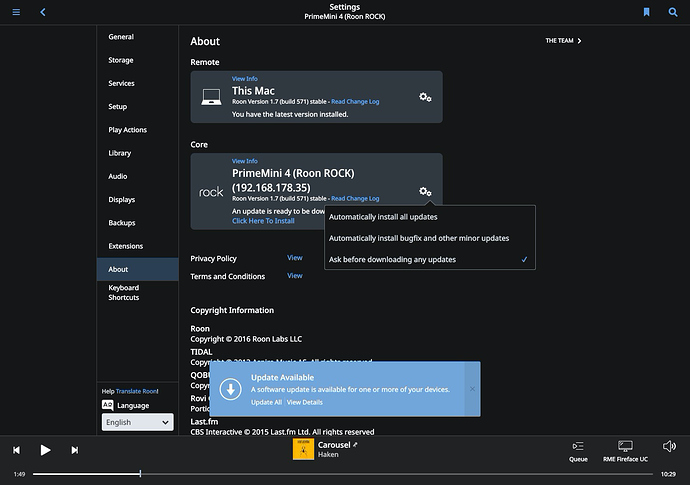