Actual CPU requirements for Roon Core? When would my NAS Celeron not be enough?

I have a library of ca. 38k songs + Tidal.
I run Roon Core on a Synology DS918+ NAS, with 8 GBs of RAM and an Intel Celeron J3455.
The files are on the NAS (5400-rpm spinning disks) and the Roon database is on a Samsung SSD drive connected to the NAS via USB.

Even playing around with the equaliser settings, the CPU usage on the NAS rarely goes above 10% when playing music; sometimes it may peak at 18-20% when searching the library, but I wouldn’t say Roon has ever been slow.

So my question is: when is a Celeron not enough? When do you really need an i3 or i7 processor?
Is it when you have, I don’t know, 6 zones playing together, all with different EQ settings? When you have a library much larger than mine?
Or would an i3 or i7 CPU mean much faster searches but not make a difference when playing music?

My experience has been that playing a DSD file with convolution filter (DSP) puts the most stress on my CPU. The CPU processing speed will drop from over 100X for a typical FLAC down to something like 2.7X (on a NUC8i7). If you try to upsample to higher DSD rates it will even drop lower, but I never use that for listening. We put together some of these experiences in this thread.
In your case, the database is on an SSD drive which will help a lot (some other low-powered NAS don’t have that). You will also be temporarily vulnerable when you are loading a lot of new music to your database or when the database updates. But you are past the heavy duty database creation step.

I first started using Roon on an AMD Turion II Neo N40L with an SSD and bags of memory; your Celeron outperform that by a factor of two. I had no problem playing 44.1kHz 16bit with 2x oversampling to a couple of zones.

However, compared to the recommended specification, GUI performance on your control device is going to be less responsive. So, if you’re not using heavy DSP functions you’re probably okay as long as you accept that searches, loading album covers, especially in the album browser, etc. are going to be a little laggy. 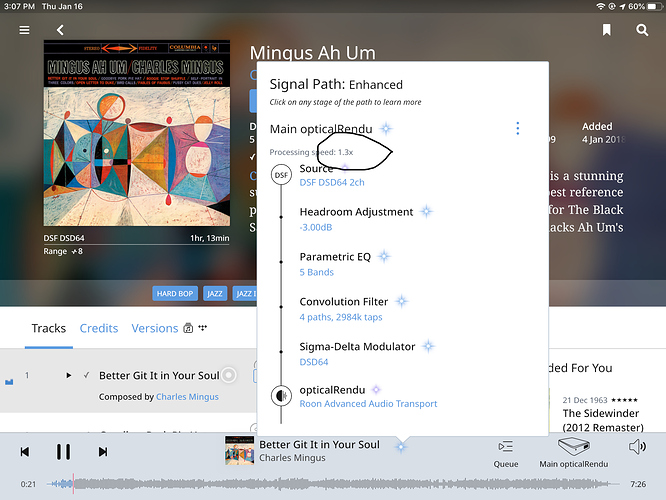 enjoying the OR? are you using it with EtherREGEN too?

for the life of me I dont know why its not on by default ???

I suggested Roon to make this default in a public post a year or two ago.

Although it was not explained why this was not done, I suspect the reasoning is to not introduce unnecessary computing overhead for users who don’t need this enabled.

My understanding is its only used when DSP and upsampling are needed - so im still not sure why that’s not a better thing to have an on default setting. Maybe Danny or Brian will chime in…not calling them in specifically.

I actually have two of them, one for the stereo and one for my headphone setup. I use the Optical Module, not the EtherREGEN. I’m really pleased with it in the stereo but the increase in detail is almost too much for the headphone system. In that situation I’m hearing things I’d rather not. Still, overall, a thumbs up.