When using the share feature from roon, you’re able to add items to an image that roon creates. But when sharing this image on twitter, there’s no way to add a alt text for the image. The alt text is important here because there isn’t a message body to describe what the image is either. Just the hash tags that roon adds. 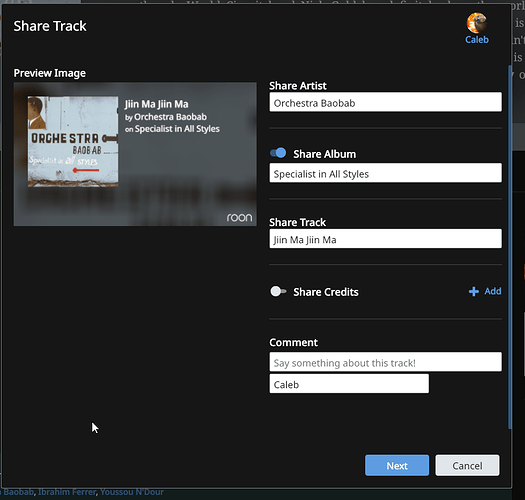 Twitter search of the roon and NowPlaying hashtags, most do not have the alt attributes.
https://twitter.com/search?q=%23roon%20%23nowplaying&src=typed_query&f=live

Optionally, I think roon could auto fill in some alt text such as [Song Name] on [Album Name] by [Artist] if a user doesn’t want to fill in the alt text.

I feel it’s important to do our part to be accessible when possible, and this feels like an achievable win by the roon team.

For now I am manually downloading the image and then sharing it myself to twitter to add the alt text myself, while this works. I would greatly appreciate the ability to add the alt text within roon just to stream line the process a bit. Also, a default alt with help others be more accessible without any effort on their part. I feel like that’s a great win as well.

Side note: the ability to add our own message to the tweet would be sweet as well

Here’s a link to the twitter api documentation that talks about adding alt text to media.
https://developer.twitter.com/en/docs/twitter-api/v1/media/upload-media/api-reference/post-media-metadata-create