Add Audeze LCD-24 DSP Preset to the existing ones

That’s it - I am using the one from the AutoEq project temporarily. It would be nice to have the one from Audeze.

Don’t know if this applies?

The Audeze presets on Roon are based on the legacy version of Audeze Reveal (just better because you’re using Roon’s superior DSP and have an additional linear filter). Audeze has moved on to their new version, which is called Reveal+ and is no longer free. And since it says on their website that the Audeze Reveal Legacy is supported for “2018 and older models” of Audeze headphones, I’d have to guess that Audeze would rather not mess with the Legacy version anymore and focus on the new version. …

I’m not sure if the LCD-24 even has a Reveal curve though. That’s a limited edition model.

Thanks Ged. I think it does, so I will reply to his suggestion. I would like to hear what the Roon folks say.

I’ve sent them a note about it.

Did you ever hear back from Audeze on your LCD-24 question? Would you use LCD-4 preset in Arron for the meantime? Thanks. Evan

No - they said it would be in the next version of their Reveal + Plugin would add it, but just I looked and see no mention of the LCD-24, yet.

Interestingly, the headphone was moved under the menu for the LCD-4 as part of that family instead of off to the side - still special order though.

LCD-4 preset: No I had used the convolution filter initially and more recently the parametric EQ from the AutoEq project here

But after following Amir reviews of headphones at Audiosciencereview.com I am using his parametric EQ (PEQ) he developed during his review of the LCD-24.; its just below the graphs in the review - he implements it in Roon.

It is simple to implement, ~ 5 bands, and I prefer the result better than the more complex ones out there. He also has one for the LCD-X I use for the same reason.

He only uses ~5 filters based on the objective output from the analyzer in combination with research from psychoacoustics that indicates only some deviations from your target curve need to be corrected, typically in the bass region. It makes the reviews interesting, educational and definitely unique.

Anyway, I will ask Audeze again, but I think the fact that they placed them under the LCD-4 menu is significant.

Thanks for your reply, Steve. I’ll experiment tomorrow with the parametric EQ setting. Do you think reveal + plug-in will interface with roon?

No, I don’t think so, they do note that it works with players that have allow plugins, e.g., Jriver - which I have one limited use case for but its not headphones.

Roon does not have a generic plug-in capability that I know of - just the specific one for HQPlayer.

One more thought on EQ:
EQ, specifically Amir’s approach, has done so much for my listening enjoyment that I now use it to experiment on all my headphones. He uses his own target curve so its likely the combination of the curve and his approach that makes it work

So I would encourage trying different techniques to EQ, be aware of each’s underlying science/principles, and then apply it in practice until you find one that works best for you.

I came late to the conclusion that all headphones needed some EQ, but now that I realize it I hope others take the time to see what works best for them. To make a final point, I use Amir’s PEQ on my LCD-X, not the Roon built-in LCD-X preset. If you have one, you might give it a go.

Or use the Oratory1990 to enter the data in Roon. Takes only few minutes: 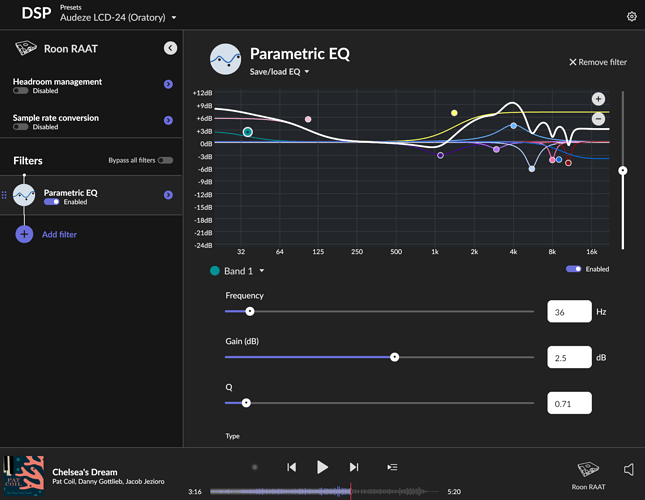