i think the title speaks for itself

Maybe this could be implemented in a CLASSICAL browsing mode which , when you select would only display classical works in a more specific way

I wouldn’t want either of those options, but equally I can see why a classical lover might.

Beyond that there are menu items I never use, or rarely use, and others I use all the time - and they’re not really positioned where I’d want them. My preference would be a level of configuration so we can have what we want where we want it. Or a secondary custom menu.

could you possibly elaborate a little bit on what you expect to achieve with your requirement?

Not meaning to oppose it but in my experience it is more productive to explain the use case, before discussing the requirement as such.

First of all I know it is not easy.
Sometimes I even don’t know how I would do it if it was all in my hands.
I am just a simple classical music lover but not an expert. And as I browse using roon, my knowledge of classical music is improving and I am discovering new works. I think Roon s magazine like approach to music library is motivating me.
I think I should start with what can be improved with what we already have in ROON.
Firstly, the COMPOSER view… Let’s use Wolfgang Amadeus Mozart for example…
1- When you click Mozart you see his biography… Ok that is nice… But why do I see a performer /composer button there, is nonsense. He has passed away 300 years ago so it is unlikely that he performed in a recording himself. I know that this depends on the metadata of the albums in my library and that ROON uses this data at its best. However, this incorrect metadata does come from the albums that have been correctly identified by Roon. Roon also depends on third party in this regard but I think that some exceptions can be made for certain composers up to and including romantic period so that composers are not also identified as performers. The list is not short I know but at least we know that it will not increase. Anyway, according to what you choose (performer or composer) the page format changes. In performer format, you can see the Wikipedia link (nice), but in composer view you don’t. Why not?
2- Now I chose Mozart form composer view and his compositions are listed. This is nice and handy. Thanks to Roon guys.
Second, COMPOSITION view,
I simply don’t like it mostly due to the list view. The good thing is that you can make it show classical only. Although all albums are identified by roon many of them have missing data particularly PERIOD and FORM, so sorting doesn’t always work perfect. I think roon can identify the period and form (most of the time at least) according to the composition since it has already identified it.
I would like to point out that some of these things I have mentioned can be overcome by manually editing metadata but it is an exhausting process and in order to achieve it one should have enough knowledge of classical music (I dont )

CONDUCTOR and ORCHESTRA navigation options.
First of all I would like to say that what I point out is valid for albums identified by Roon so I assume it should contain correct metadata.
Let me explain this with an example.

Capture.PNG1436×479 38.1 KB
In this first screenshot Conductor is correct composer is correct and performing orchestra is correct When you click on the performer/conductor/composer links you arrive to the correct pages. 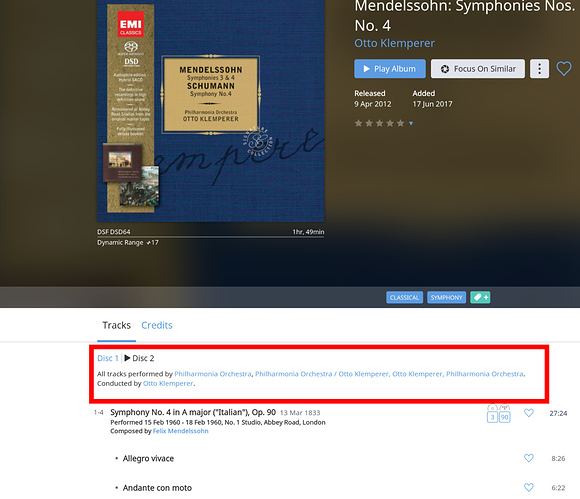 However in this picture it is a bit messed up. By the way this is the Disc 2 of the same boxset in picture 1 and is identified automatically by roon.
Still all info is true (as text only). However the performer is identified as Phillarmonic orchestra otto Klemperer together rather than Otto Klemperer and Phillarmonic orchestra separately… It is still a clickable link but it gets you nowhere but to a page with no info. Composer is not displayed probably due to that fact that disc 2 contains works both from Schuman and Mendelsson whereas disc 1 only contains works from Mendelsson.

Briefly, Roon sometimes combines the names of the orchestra and conductor and sometimes with the composer and as in this example there are 3 performers (artists) in Roon instead of 2. 1- Otto Klemperer, 2- Philarmonic orchestra, 3-Otto Klemperer/ Phillarmonic orchestra. In some albums you can see the performer/artist name as Conductor / Orchestra together but they are clickable separately and the “/” sign is not blue colored , However in some albums such as in this case CONDUCTOR/ORCHESTRA is one single clickable link.
The problem for me here is that while roon identifies performing artists in some albums correctly such as the performing orchestra, conductor, …etc, it can not differentiate between orchestra and conductor and combines it in a single name with and sees it as a different artist/ performer. The thing is this metadata comes from ROON s database, it is not the result of a incorrect embedded metadata.

This is an annoying inconsistency for me indeed.

The reason I want conductor and orchestra to be navigated separately is a bit different but in order for it to work correctly I felt that I should have explained the above part.

There are many versions o f a composition in my library and I like some performances better than others, and the more I listened to classical music , the more I started to differentiate nuances in different performances and consequently, I now have favorite conductors and orchestras. In the past I believed they were all the same and did not clearly understand why some people thought some performances were legendary, but now I get it, not always but usually.
So navigating by conductor or orchestra sometimes makes it easier to navigate …

I totally agree with that
I think classical music needs a different approach in many ways and I thank roon guys for that because I believe they are in a good direction and have improved roon significantly. I hope it gets better

My original request for this is from 2 July 2014

It’s the single biggest thing missing in classical for me. Box sets are very cumbersome to use without it. Didn’t I already write up the need in a separate post?

(Aside: I am truly surprised by the small number of people wanting classical features on the forum. I assume classical is simply a small part of Roon’s user base. Or classical fans aren’t so often forum animals (that’s certainly true of the people in my family I’ve sold Roon to). Or (my favourite, but most depressing, option) classical fans see that Roon is built for pop music and find it too expensive for the classical feature set. If it’s the latter it’s in Roon’s interests to fix.)

The thing is this metadata comes from ROON s database, it is not the result of a incorrect embedded metadata.

Yes, there’s the rub, I think. The old adage of “Garbage in, garbage out…” was never more true than when it comes to the state of classical metadata. I’m afraid that we are collectively faced with the Sisyphean task of reporting it and/or manually fixing it for ourselves…

I hope not. But I believe it will improve. I also tried to manually correct some metadata with different combinations of metadata import settings. But thath didnot go very welll. Maybe an advanced metadata ediitor in roon could help