It would be nice if Cover Art could be added to the options in the Now Playing customisation menu. It wouldn’t even have to be displayed in hi-res, blurred may even be better, like the backgound of ye olde Now Playing screen.

Why? Because quite a few albums are not in the Roon database, so there is nothing to display in the large upper half of the Now Playing screen. 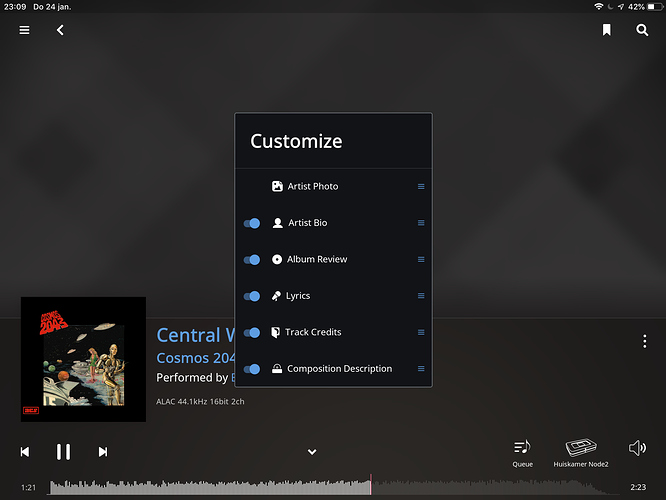 If that is the case, Roon will show the familiar ‘grey diagonal filler background’ image (also blurred) but even when an album is not in the Roon database, it is very likely that it does have a cover art image embedded. And something more colourful instead of the grey diagonals would make a much nicer screenshot.

I’d like to see a configuration option to toggle where the artist image and the album image are displayed.

And in the case where only one image is available, to display that in the most prominent position.

Just wanted to suggest the same, so +1 from me.

Next to this maybe a soft fade at the bottom of the top part that almost seemlessly blends into the now playing bottom part (hope I make sense).

Also for it be circular so swiping beyond the last screen displays the first one one more (and first to last of course).