I record quite a few radio series and stick them in my library. For some reason Roon never manages to cleanly pick these up when I merge new episodes with the existing albums. Here is a classic case in point where despite the new episode having the correct track and disc number it keeps making me have to manually force it into the right spot. 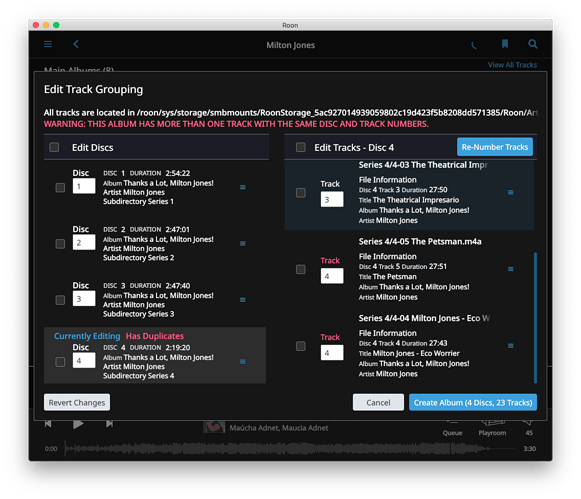 Roon can plainly see that the episode “The Petsman” is disc 4 track 5 but is trying to add this as a duplicate track 4. All the other tags are consistent with each other.

I wonder whether Roon is trying to get a track number from the title, rather than the file tags. If you look at
Settings > Library > Import Settings > Track’s Track number
Try using prefer file if you haven’t got it that way already.

Disclaimer: What follows is just a reflection from my side, I don’t know if it can be a problem, and if it is a problem here.

Very often, in fact most of the time, track numbers in the embedded metadat of an album, the number actuallis not not a number, but specifies the tracknumber and the total number of tracks.
so track number looks like e.g. 4/15 .

A few years back, I have encountered problems in Jriver with this notation, so I have consistently edited all my albums metadata, and specified the real track number, in the example track 4.

I can imagine that Roon notices the total track number for the album, and just refuses to add an extra track number?

Maybe worthwhile to do a quick check with 1 album, and edit the tracknumbers with the total tracknumber.

Thank you for the thought.

I redo all the tags before I add the file, as often the metadata from the radio are always wrong for my filing. I alway use just the track number as I’m adding one track at a time as the radio series tend to be broadcast weekly, and often I’ve no idea how many episodes there will be.

At present it is set to prefer Roon. I’d assumed because all Roon is seeing the disc and track numbers that it would be happy. None of these are recognised of course as they are radio series.

I’ll try changing and report back once I add a new episode.