Adele's 25 not getting any metadata

Adele’s 25; I’m still not getting any metadata for it, except for Hello.
No AMG data, no lyrics nor credits.

I just tried re-identifying it, didn’t help.
Do we know of any problem with that album specifically?

The album is only a few days old - you’ve got to give them a little time to do that.
I have classical masterpieces almost a year old which are unidentified, and some much older which shall never be Roon-identified - such is life.

I disagree. There is no excuse for this not to be available for the fastest selling album of all time.

It would take 10 minutes to input custom metadata by hand into the Roon server just for that album. @jeremiah

I think its probably a blessing in disguise

I was complaining about the new Tidal releases not having any metadata as well and it didn’t seem to get much traction. Hoping that the data would be there day one if it was already there on Allmusic.com

When I last checked on this, things were improving and I was seeing some metadata within the first week but prior, it seemed like it was taking Roon up to 3 weeks to pull in the data. For this album, allmusic already has the data, so Roon should be able to pull it.

I’ve been seeing continous improvement of the immediacy of Roon’s Tidal’s library for new releases. If I’m interested in a new release I’ve seen on Allmusic (where I look for new release info every Friday) and if I don’t find it in Roon, I do a search un the Tidal app and “Favorite” the album. It usually appears in my Roon library shortly thereafter. If it’s an artist I simply must hear immediately, I play it through Tidal.

It isn’t unreasonable to expect Roon to have an up-to-the-minute version of Tidal’s library but I’ve learned to temper my expectations as I’ve witnessed the improvements Roon has been making to the timeliness of their data. Kudo’s to Roon for getting much better at this.

This shouldn’t have anything to do with whether the album is available on Tidal or not. The metadata doesn’t come from Tidal anyway.
And the album has been out since Nov 20, that’s 22+ days. Allmusic had the review a long, long time ago, in the first week I believe. If Roon is supposed to update these every week then something is obviously wrong.

Hopefully I didn’t sidetrack this with Tidal. The issue has nothing to do with Tidal, it has to do with Roon pulling the latest Allmusic.com data feed in a timely manner. Which really shouldn’t take longer than a day or two.

The only reason I mention Tidal is that you can see new releases as they happen and easily see where Roon is missing latest metadata. This would be the same if bought new CD and imported. It would still be missing the data.

The other issue of Roon having Tidal new releases available day one is another thread and has greatly improved. But that discussion shouldn’t take place in this thread.

Anyone from the Roon team that may have an answer? The metadata is still not available.

Not sure what’s happening on your side, but I just added the album for good measure (and because my wife kept nagging me about it… ;-)) and it was identified just fine: 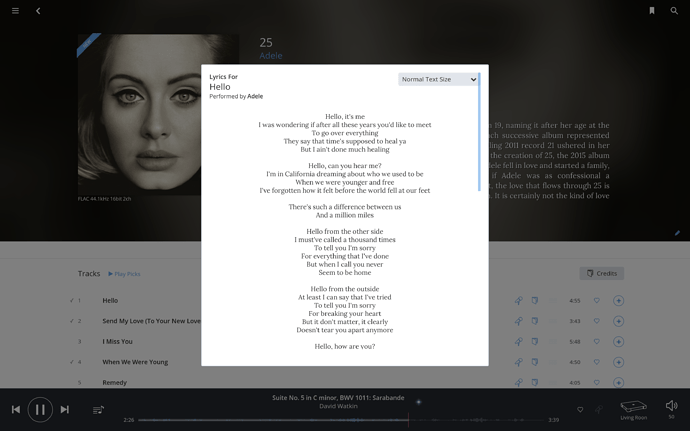 This does bring up an interesting issue with Roon. When an album is analyzed and doesn’t have metadata, how does it get added in Roon once it gets added in AllMusic? I had to manually re-identify the album and choose the exact version to get the metadata.

Seems like this should be easier and more automatic.

That’s a good question. Am I the only one?

I have the Target version, which has 3 bonus tracks. Could it be that? I would expect that if that was the case I would be able to choose from different versions, but I don’t have that option.

Hello from the outside I guess

OK, so a couple of weird things happened now.

I tried my best to re-identify the album but it didn’t bring any new metadata.
I then decided to change the folder name of the album to trigger a DB update. That caused the album to completely vanish from Roon! That hasn’t happened in a while…
I took the album folder out of the watched folder and then put it back in. The album returned, and now it had lyrics and credits, but no review.
I tried re-identifying again. This time I was given 3 options, 3 versions of the album. I chose the one without the bonus tracks and viola! I now had the review. I then re-identified once again and this time chose the version with the bonus tracks again. Nothing changed and I still have the album review, so I’m all set.

To sum it up, something obviously didn’t go right here, but I can’t put my finger on what it was exactly. It could be that when I removed the “(Target Deluxe Edition)” from the folder name it caused Roon to identify the album differently, but I really hope that’s not the case.

By the way, the credits are still very lacking: 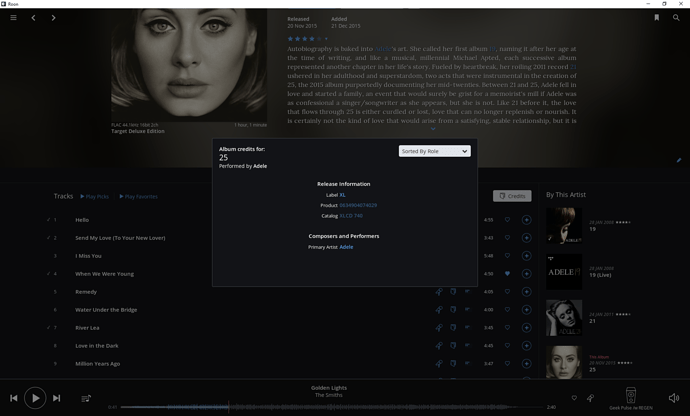 The individual tracks also only have “primary artist” in their credits.