Hi, all. My current setup is simple compared to many here – 2013 macbook air, OS sierra, core i5, 8GB ram. This runs roon core, streams Tidal and has a smallish FLAC/mp3 library on the built in 256GB SSD. DAC is a Meridian Explorer2/usb. The machine is still used for various other purposes and has a lot of other software and files on it.

I’ve thought about upgrading my digital rig, but I’m about 95% vinyl and have probably 15x more invested in my analog setup, so I’ve never been able to justify pulling the trigger. I’d rather spend money on cartridges and records.
But recently a friend offered me a mid-2010 Mac mini for free, which has filled my head with all sorts of diy ideas, so I’m posting to the community for advice:

If so, what’s the best setup, assuming I’d put another $350-ish toward accessories?

One thought is to put the mini in the rack, with a wyred4sound recovery or similar usb isolator/reclocker and possibly a diy linear power supply like the teradak.

Another is the mini on the Ethernet switch in another room, with a streamer/bridge like the Allo or Micro Rendu in the rack. The only catch there is I live in an apartment and there’s no way to run Ethernet to the stereo rack, so any network bridge would need to be connected to Ethernet via an apple airport express that I already own, or be WiFi enabled on its own.

Either of these options would be followed at some point by a major MQA-capable DAC upgrade. Used Mytek Liberty or similar.

Interested to get people’s thoughts on which of these ideas might work better… or if either will yield an appreciable improvement over my current situation.

A core 2 duo is really slow. Personally I’d go on eBay and buy a fully loaded i3 nuc for 250 or so dollars that would be much faster and put ROCK on it.

That MacMini with the upgrades you have in mind, will work just fine. I have about the same (less RAM) on one of my locations, using it as a streamer.
The ethernet solution I have, for a similar problem you describe, is using Ubiquiti Unify wifi connectors. On the ‘receiving end’ I have one that has two ethernet ports, one connects my streamer to the network. Not the cheapest solution, but it works great.

Using it as a streamer is very different to having it as a core. It might well work but it seems odd to spend any money on something that might work.

I use a 2009 Mac Mini as a server. It works absolutely fine. I would not use it as a full core machine though, but you can use your laptop for control. It is also a bit loud, so I would keep it away from your listening room if at all possible.

If the computer is free then why not give it a go? You can try it out before adding SSD and additional RAM to see if it’s going to work for you. My hunch is it will probably be fine.

I used a 2010 mini (with SSD and 16gig ram) as my core when I was doing the demo before I paid for roon. I have a library of about 33000 tracks and it worked well for me. I would stream to up to two zones at a time and didn’t do DSP. I bought a NUC8i5 when I paid for roon and moved to it. It could be a tiny bit more snappy than the mac, but certainly not significantly so.

My mac mini is headless and acting as a web and file server for our house and it torrents british TV shows. So other than Roon it wasn’t doing much heavy lifting.

So if your needs are reasonable, you could be fine. IF you do get it, try the trial and see how it works for you.

As an old guy who was doing computational fluid dynamics in the 80’s and 90’s, all these computers these days are just stupid fast. What used to be done on a DEC or a Sun workstation that cost as much as a house, can now be done on a $3 system on a chip. My ancient old macMini is a marvel, and the supercomputer in my pocket is unbelievable. I wrote a 200 page thesis on a 16mhz machine with 8meg of ram and 40meg hard drive, how times have changed.

As stated above, free means worth a try. But a supported NUC would be a great choice too.

Will greatly depend on your library size, significant DSP will probably be off limits, DSD perhaps too. an SSD will be a MUST DO, ram at 4GB might be OK but your proof will be in the pudding.

DSP will probably be off limits

No, it really won’t be. I have volume levelling and EQ filters on mine without an issue. 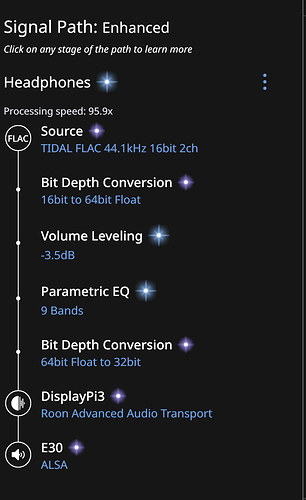 Sorry, I was showing my headphones set up as that is what I was using given the hour, Here is my speakers set up with full room correction. I agree that I am (barely) not able to upsample to 512DSD, but that is a fairly limited use case. 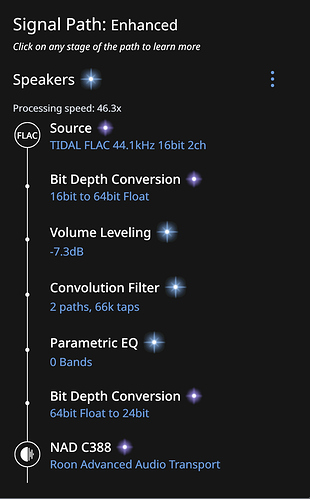 Thanks to everyone for the advice. I’m encouraged by the mac mini owners’ experiences. The SSD and RAM will definitely happen since they’ll benefit the mac in whatever purpose it eventually serves, but beyond that I’ll take it one step at a time and see how it works out.

I don’t think my needs are very taxing…mostly tidal, my library isn’t huge, one zone, fixed volume, no DSP or DSD. The only software I’ll have on the machine will what it needs to operate, run roon core, and send bits where they need to go.

So I’ll start with the mini in the rack, mac > usb > DAC. Thats essentially what I’m doing now with my laptop and if it works then I’ll move forward with reclocker/galvanic, LPS, etc.

I think going in stages and evaluating each step is a good idea. I’ll have the Mac sometime in Nov and will report back. Thanks again everyone.

I think it will work fine but I wonder why you need 16gb of ram in a computer that is 10 years old? How many things will you be running simultaneously and how much dsp are you planning to perform?

My guess is at 8gb of ram you will still have the CPU/motherboard as main bottlenecks. Correct me if I’m wrong.

I’m definitely no expert there. 16 is the max that will fit and my logic was the more I gave the CPU to work with, the better. Also, plenty of sites say the 2010 mini is compatible with their 16 GB upgrade kits. (And surely plenty are more than happy to sell me more than I need.)

I did note most mini owners on this thread had 8 or less, though @Sheldon_Stokes has 16. What limits the ram the processor/board can advantage of? And Sheldon, did you upgrade to 16 GB and if so, did you notice a performance boost?

This mac has 8 GB already so I guess I’ll install the SSD and see how it performs. If you’re right, you (and @wizardofoz) will have saved me $70 or so. Thanks to all you guys.

I just checked mine and I have 4GB of memory. My library is not particularly large though - only about 1000 albums ripped from CDs in ALAC - plus some Tidal odds and sods.

I put 16 gig in it when I was doing a lot more with it. I had it running a bunch of server stuff, and I was torrenting a LOT of British TV at the time. I was seeding several hundred shows at any one time after grabbing them from folks in the UK. I was also using the machine for web serving, webdav, and a few other things at the time. Given the cheapness of the memory at the time, I beefed it up when I switched to an SSD as the main system drive and put a 2TB spinning disk in as the second drive in the case. I now have three external drives (15 TB total) hanging off of it.

I never had a problem with anything roon related, but my library is only about 33,000 tracks. 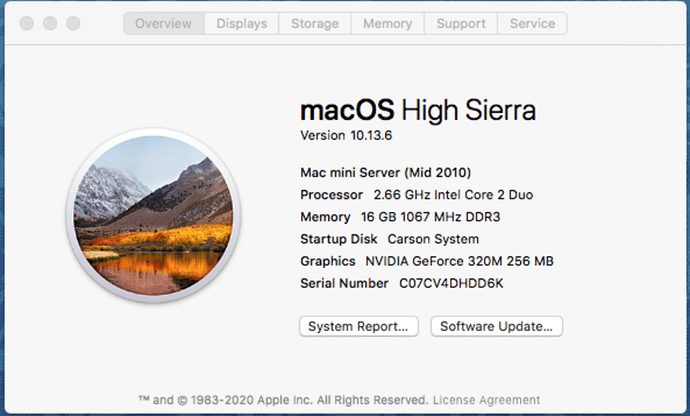 Just wanted to follow up and say thanks to all who graciously offered help on this project.

Got my hands on the mini a week ago. Bought a $65 SSD kit that came with torx tools and an enclosure for the old drive. I did a clean install of High Sierra, dropped my library on it, and put it in the mini, leaving the 8GB RAM it came with alone. I then turned off IR, Bluetooth, WiFi, and anything extraneous that might try to run in the background. (I kept “restart after power interruption,” a script that launches dbPoweramp when I insert a CD, and screen/file/optical drive sharing turned on.) It’s connected to the network via Ethernet to an old airport express… theory being, why make the mini run a radio receiver if it doesn’t have to?

This weekend I added a Wyred 4 Sound USB reclocker/5V isolator between the mini and DAC, which made a fairly shocking improvement in terms of detail and image depth. So here’s a $215 investment in a 10-year old unwanted computer giving a rather expensive analog front end a pretty damn good run for it’s money.

Thanks for your help, guys. I can see this keeping me satisfied for a long while.

It’s connected to the network via Ethernet to an old airport express… theory being, why make the mini run a radio receiver if it doesn’t have to?

So it’s running still running over a crappy wifi connection and apple wifi (802.11n maybe) at that (not recommended) but if you find it works for you go for it.

I use a 8gb, Late 2014, El Capitan, Mac Mini with Roon Bridge installed. I have a Roon core on a Qnap. Audio out is via USB with a Jitterbug to a USB in on a Hegel 12 DAC.

It works pretty well.
It is cludgy in that it is headless and to do any system level changes I have to use VNC or add a monitor/keyboard/mouse. But it just sits there otherwise and doesn’t do anything else.