I re-installed Roon and it indexed the iTunes library completely anew. Unfortunately, in the first round, it automatically used some iNet database and showed nearly twice as many albums (once with my file cover and the other with a cover from the iNet) as I have in reality (3000<). This was due to listing many albums with my own tagging as well as with a slightly deviating iNet tagging. Very dissatisfying.

Now I un-checked all options for using “Roon genres”, “more covers and photos”, “extra icons” etc and Roon re-indexed again, removing MOST of the doubly entries, but not all. The problem is that some album titles are still wrong and not in the format of my iTunes meta information. Unfortunately, many iNet tags are unusable particularly with classical music.

Is there a way to make Roon index and use ONLY the local meta information?

Wherefrom does Roon take its wisdom regarding albums? I thought they use an external database on the web?

Can I actually select all albums (even though they are thousands) and tell Roon to prefer file tags? Or will this procedure create havoc?

Hi @WKW ----- Thank you for the feedback and my apologies for the torubles here.

First go to your Album browser. Then select all of your albums. Click the Edit button that has appeared at the top right, then choose the Metadata tab to reveal: 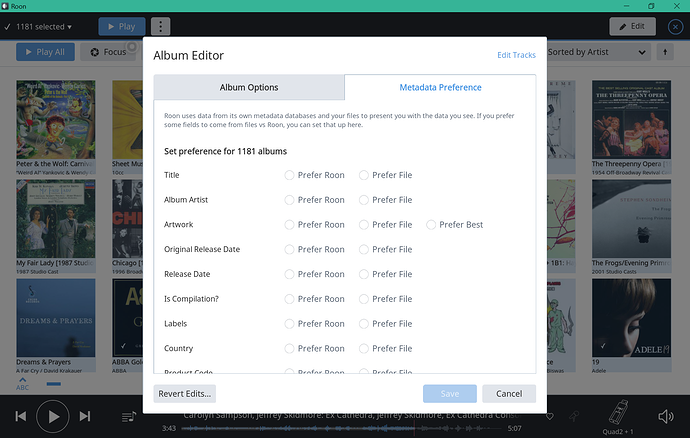 For more tips on how to edit and groom your collection visit our knowledge base article here.

Thanks Eric. That worked and my albums seem to be labelled according to my wishes. Nevertheless I still miss 16 albums: The album count in iTunes is 3066 and in Roon 3050. I initiated a rescanning but that didn’t change the count.

Is there a way to define the source of meta data for all newly added files?

The missing albums are solved (mpeg-video format in the iTunes folders).

But I am still interested in a way to define the source of meta data for all newly added files. Any ideas?

Hi @WKW ---- Thank you for the follow up and sharing this feedback with me, glad to hear things have been sorted out.

Currently in 1.2 you have to manually select, from our “album editor”, your metadata preference as you have done. However, in 1.3 (which will be arriving soon) you will be given the option to choose library defaults which will allow you to apply these changes to your entire collection in one shot