After sleep the GUI doesn't come back to the browser

(My symptoms have been variable because I had a hard-to-diagnose networking problem; finally figured it out.)

When I pick up an iPad or Windows machine that has been really asleep (not after a short interruption) the GUI comes back in a bad position. Recently it comes back to a white screen with no back arrow, but the hamburger menu works, I can go to an album browser. Previously it would come back looking at an album, not the one I was previously playing, but one I have looked at in recent days.

The correct behavior should be to come back where it was; the different power states of sleep is an implementation detail that is irrelevant to the abstraction, and is incomprehensible to the user (and likely to become more so as power management becomes more sophisticated).

You could persist it (robustly) on the remote device, or per-device on the server.

Hello @AndersVinberg sorry for troubles, can you describe your setup in details ? Specs of your machine, OS you are running and Roon ver.#

@vova I’m a little vague, apologize for that – I had the most infuriating networking problem that blocked not only Roon from connecting after an overnight, but SMB and RDP as well. Explored everything, finally replaced my (high-end) wifi router and it seems to have fixed it.

At this time, I have an iPad retina 2 running iOS 9.1; today it comes back to an album, not necessarily the right one, but I am quite sure that last week it would wake up to a white screen as I described. An iPad mini with iOS 8.4, comes back to the browser, but I think I have seen bad behavior there as well. Windows 10 desktop, I don’t have clear answers because it is always on, have to remember to turn Roon off.

I’ll do some more systematic testing and notetaking…

At this time, I have an iPad retina 2 running iOS 9.1; today it comes back to an album, not necessarily the right one, but I am quite sure that last week it would wake up to a white screen as I described.

I’ve seen this too, but usually I chalk it up to network slowness. If I don’t touch it, usually the saved state loads in roughly 5-10 seconds, which would make sense if the remote is having trouble loading the saved screen from the core.

If you don’t mind, the next time you see it leave it be and let me know if it loads eventually.

@mike @vova Recent proof: but the iOS 9.1 iPad to sleep, went shopping for an hour, came back and turned it on. It was on the album browser when I left. It came back looking at a Tidal album that I added to the library yesterday but which I have provably never played because it is listed as “Unavailable”.

I did leave it be, has not recovered after typing this (on another computer).

But now I don’t have any network issues, it responds immediately to Back, view the queue, hamburger menu.

Not sure if this helps or not (or if I am stating the obvious) but I find that on turning back on a remote it goes back to where I last was on that remote not what was last played or last looked at from either the core or any other remote. It is also pointing at the zone I last used with that remote and not the last zone I played.

At first I found this a little confusing but when you think about it this is really the right way to do things especially when you consider multiple zones and private zones attached to each remote and that you can control and play different things to different zones at the same time from either the same or different remotes. I love the way Roon does this and you can so easily transfer what you are playing from one zone to another.

Sure. But the iPad shows albums I have never played. It’s confused, I’m not.

@mike @vova This is how my iPad 9.1 came back in the morning. No content and no back arrow. 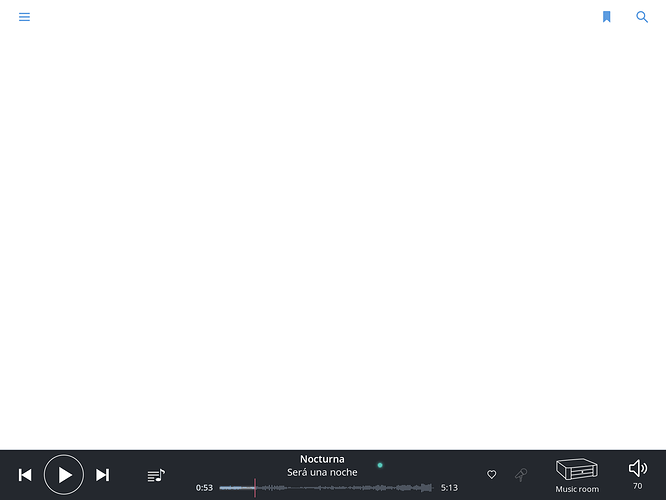 I reproduced a similar issue this morning with help from @ncpl, but I still haven’t seen this:

the iPad shows albums I have never played

To be clear, you mean albums you’ve never viewed right? It’s returning you to albums you weren’t viewing when you slept the iPad right?

Both are true: it returns me to an album I was not viewing last night (but I have viewed it before).
In some cases it is also an album I have never played (because it is unavailable, which I knew because I viewed it).

So coming back on this album is not a remnant of either my recent viewing history or my “ever” playing history.

Btw, I am not convinced this is only an iOS, or iOS 9.1, phenomenon. But at present I can’t prove that.

Wrt repeatability: I just filed an error about jumps in the alphabet slider.
I had previously viewed, but not played, a Springsteen album.
When writing the error report, I wanted to get it right so I kept switching between the album browser and Safari. Every time I switched back to Roon, I landed in the Springsteen.

And this is in iOS 8.4, which I had suspected but not repeated before.