I’ve been very vocal about the Roon playlist HCI model in the past. However, I’ve had a revelation that I want to share as both an observation and an apology to the Roon UX designers.

Bear with me for a moment…

As I type this I am listening to a recording of Pink Floyd’s “Wish You Were Here” on a cassette tape (TDK MA-110), beautifully recorded from a first pressing LP I own and played back on my Nakamichi 582. I have re-discovered the magic of LPs and tapes.

I am not interested in debating vinyl or, God forbid, cassette tape, vs digital formats. However, I encourage you to read this article from Minneapolis City Pages and see this passage as I did, with respect to Roon’s playback model:

The Cassette Tape Is Alive and Well in Minneapolis | City Pages

All hail cassette tapes, the durable rectangles of years past. While most people were transitioning from tapes to discs to digital media, a small subset…

…and scroll about 2/3rd of the way down:

“Being able to skip over and bounce around, not really caring about your release and not having to care about your release… with a cassette, sure you can fast-forward and rewind, but it’s not precise. To really enjoy a cassette, you just have to pop it in and let it go, which is I think an aspect of it that has been appealing to people that really care about music. It’s not like, “Oh this is the single. I don’t have to listen to the rest of the CD.” It forces you to think of an album as an album. Music was getting away from that. It was just albums of singles. You have a good single and the rest is filler. [With tapes] you have to think of it as a complete work.” 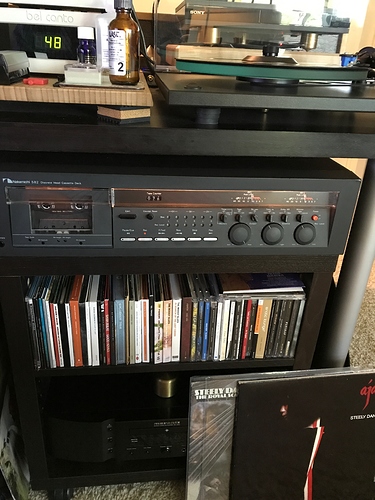 an apology to the Roon UX designers.

Great article - thanks for sharing. But just for my background info, what is the apology for (if you don’t mind me asking?)?

I have digitised my Isaac Guillory Tapes at 24/96 with great success and deliberately didn’t put Tracks in but kept it as ‘A Piece’ as this was always my only option with it anyways.
The cassette of the ‘Live’ Perfomance. (Nearly all his recordings are live anyway) has tracks that never made it to the newfangled CD format probably due to licensing so his version of ‘Watchtower’ from Jimmy Hendrix is now very rare and I am happy to have it.
I keep my cassette very safe and would never dream of having such a rarity floating around the car. I know they won’t get scratched but they do unfurl and the tapes can jam up. You need a handy biro or pencil to fix this. Also the heat variations can be tremendous in the exreems in a car which can’t be good.
We lost Isaac in 2000, the day the music died, for a while as we used to always enjoy his mastery live whenever we could.
I’ll give the full unexpurgated cassette version a spin on Roon very soon to bring back memories of those days. 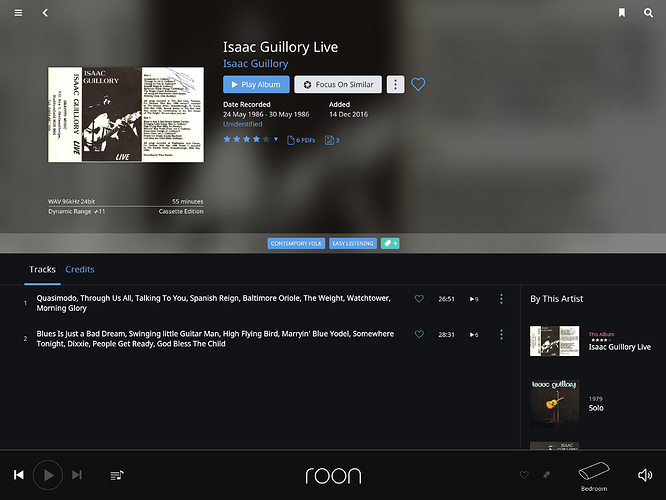 I agree that file-based music (digital, really) has made it easier to not appreciate albums as whole works. My favorite listening is to randomize through the library, and I get annoyed when Roon treats an album as a single work (classical, soundtracks).

Nevertheless, and this may be simply the result of my own limited perspective or unrefined tastes, I find that the vast majority of albums don’t have much to offer as complete works. I’m 45 years old, if that helps further contextualize my take on this.

Despite my shallow listening habits, I think I can say with confidence that most of the vinyl I spin does seem to have coherence that goes beyond style (themes, stories, etc.). The first explanation that comes to mind is that I only buy vinyl when I really, really, really like the album. The cost of new vinyl has increased so much and so fast, that I no longer take chances or buy whimsically. Record Store Day is no longer a nuclear event for my bank account…

There does seem to be a lot of folks in this forum that do use Roon to listen to whole albums, though.

Chris, just curious, what are you using to do the digitizing harware wise?

I have an old pioneer CT-W60Dr twin cassette player with a digital processing system. (Effectively removes tape hiss) that I just fed Analog to my computer using stock software as an experiment.
I can’t remember the name just now as it’s on my old XP computer I’d have to boot it up and that’s a long job lol.
There was nothing to lose trying and the results are remarkable. At 24/96 it’s indistinguishable from The cassette. (Saves me wearing it out)
I have also digitised a lot of audiobook cassette in the past this way too. You have to do it in real time, so it is a pain.

Digital certainly empowers users to listen to music in their own ways, but many of us are album folk going way back - and still treat music this way.

I had ABBA’s “The Singles - The First Ten Years” (poor choice of title considering their permanent hiatus since then) on cassette when it was new in 1982 (I was 11) and the Polydor CDs have been in my collection for quite some time. Because I had the remastered albums, I never bothered ripping the CDs until very recently. Now, in Roon, the album’s been in regular rotation for the last few weeks - my intimate knowledge of the old tapes (and the sequence of the tracks) coming back to me anew, rekindling memories of my formative years. I don’t think you’ve got to actually play the tapes in order to appreciate an album - it just takes a little focus.

I do like the ability to ‘surf’ (edit: swim?) the library though (to use the old Sooloos terminology.). Chacun à son gôut. 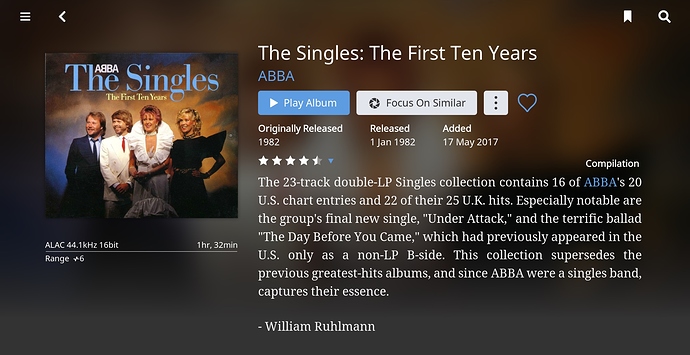 Great article - thanks for sharing. But just for my background info, what is the apology for (if you don’t mind me asking?)?

Search for threads complaining about the playback queue (there is a hot one going on now: One Click Play, Please). In many of these I was arguing heatedly for a better interaction model to avoid the 5 clicks needed to start playback from the middle of an album, as an example.

I still don’t like the playback UI, but my post was wondering out-loud if this was intentional to attempt to replicate the “album” playback experience.