I have an issue and have tried to search for a solution but have drawn a blank. For a few months now I have noticed, after integrating my Tidal account, a large number of albums appearing in album view which I don’t recognise and have (usually) one track in their listing. I did wonder whether this is an issue with tracks in certain Tidal playlists showing up as albums in my collection - but if every track in a playlist was showing up as an album (from which that track comes) in my collection, the bloat in album view would surely be much greater.

I did wonder whether I have left something off in the settings but I can’t see that I have. Without looking at each ‘unrecognised’ album in my collection, it intuitively seems to me that the playlists option seems more likely - I can see that some of them are in a Tidal playlist somewhere. I do want a solution to this as the bloat in my collection is a huge pain. I tend at the moment to just opt to ‘hide’ the album if I don’t recognise it and want it gone, but this isn’t a sustainable approach.

Another possibility is that a few months ago I did for the first time use the Soundiiz web app to sync items from an old subscription to a service (e.g. Spotify) and also to clone a playlist from e.g. Spotify to Tidal. I do wonder whether this might be contributing.

Anyone either also experienced this or have any ideas? I may not have described it perfectly, but this is the jist.

I’m unclear what your commenting on here, could you elaborate maybe with some examples / screen shots if that helps.

If you add a track to Tidal then it will appear in roon as an album consisting of one track. So if you added a lot of individual tracks via various means you will have a lot of single track albums added.

Thanks @ged_hickman1 - I thought that was the case, and looks like my use of Soundiiz to clone non-Tidal playlists in Tidal is the explanation.

Not great though - would hope for settings in Roon to tweak single track albums so they are not showing up in the album list in Roon. I have hidden the albums manually, but it is a faff. Thanks again

Not great though - would hope for settings in Roon to tweak single track albums so they are not showing up in the album list in Roon.

This is not an issue with Roon. I have plenty of playlists with TIDAL tracks where I don’t have the album in my library. Your issue was caused by the way you imported playlist tracks using Soundiiz. Deleting the albums won’t remove the track from a TIDAL playlist.

As always, before you experiment or make major changes to your library, take a backup first.

Playlists tracks don’t have to be in your library to be in a playlist. They do for some other things, but, not to just exist in a playlist. Hiding them is easy though, go to albums, select Focus, on the right select Inspector, Select Track Count, Enter 1 and 1 so it gets albums with only 1 track (if you made the 2nd number 2 it would get all albums with 2 or less tracks). Then you can select All and hide.

Additionally, you can add features like Hidden (or not Hidden), and then create a bookmark and that will give you a 2 click option to get to all those albums of singles you’ve hidden. 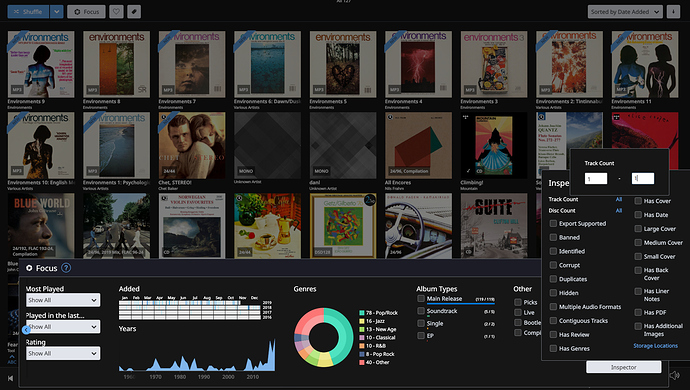 Thanks so much @Rugby, that worked brilliantly. Really grateful, as is my collection!