Hi, I’m a new Roon user and I’m having a lot of trouble with album grouping. All of my audio files are meticulously tagged, so I want to be able to do a batch import and have it get everything right (by which I mean, I just want it to use the metadata that already exists in the file tags rather than attempting to do anything “smart” with disc numbers or album titles). I haven’t been able to find solutions by searching.

This article gives some pointers on dealing with boxsets, but I suspect that you’re going to be fighting Roon.- it has its own opinions on how things should be done.

I tend to agree with @Geoff_Coupe , one of Roon’s nice features (to me) is how it groups Versions, it can be overcome but unfortunately very manually . Eg Renumbering Disc # to stop the White album being part of a set . Your directory structure will greatly affect how Roon imports your albums,

have you set any import preferences 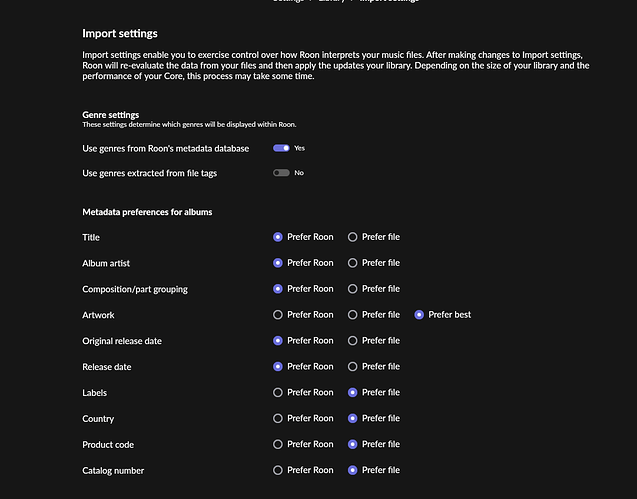 Thanks @Mike_O_Neill ! I used your suggestion of setting import preferences, then I went to the Tracks view, hit ctrl+a, and hit the Edit → Re-identify Tracks button, which basically reimported all the tracks regardless of whether they were the primary version of their respective albums (so I was able to work around the bug from issue #2 in my original post).

Unfortunately I still can’t get Roon to respect the tracks’ media number (by just reading it from the file tag, not trying to parse it from the directory name). This seems like it should be the preferred behavior, or at least an option. As a result, it’s doing dumb stuff such as:

That’s why I wanted to see you folder structure , Roon does a few things that you may consider funny depending on how you lay out your folders

If you have a Box master folder then subfolders Cd1 - Album1, CD2 - Album 2 etc Roon will assume these are individual albums and use the Album Tag to create separate albums hence your Bonfire x 5. If the sub folders are Bare ie CD1 , CD2 etc Roon will create a Multi disc set with the the Album Name and Sub Discs. I leave subfolders as CD1 - Album 1 when I WANT to split a box , but you still have to clean up Disc #. Realistically Boxes are best left as is with their subfolders simple CD1 etc and the Disc # uneditted

Roon will try to identify each album it imports , your eg with Barenaked Ladies exists in AllMusic so should have been honoured as the title is as shown , is there any subfolders in that folder. Can’t explain that one the colon in an Album title is pretty common in classical music and is honoured as Text

Some Characters are seen as delimiters eg your backslash so Roon will split off something it recognises ie CD5 etc " Recordings of Shortwave Numbers Stations – 1111 / CD5" isn’t really a conventional album title . You can remove the back slash in import settings.

Unless a very large part of your library has “odd” (pardon my definition of odd ) album names then correcting you Box Set subfolders ought top clear up a lot of the mess. If you don’t want to correct the folder name then a manual Merge will create the Box, both options are unfortunately manual.

Roon does pretty well on mainstream stuff but must have fairy fixed format rules to work , it struggles with some obscure albums where the album titles et are “non standrd”

Roon’s metadata sources are AllMusic/TiVo and MusicBrainz if an album doesn’t exists in either of these Roon will use the file tags but ultimately the album will not ID. So in the case of funnies the first move is to check if the album exists in there 2 sources

Thanks again for your assistance.

The problem with the Barenaked Ladies album is that the title of the album literally starts with the phrase “Disc One” and, even though the files are tagged correctly, Roon insists on trying to be smart and overriding the file’s tags and whatever it found in the online databases. Pretty much all of my problems with Roon would be solved if it would just use the files’ tags (which are there for a reason, of course) instead of making me play games with the directory structure. If the files are tagged then the directory structure shouldn’t matter, or at least, shouldn’t override the tags that have been meticulously set. 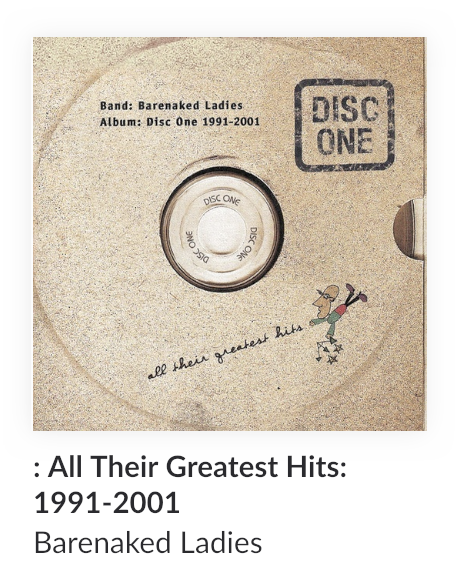 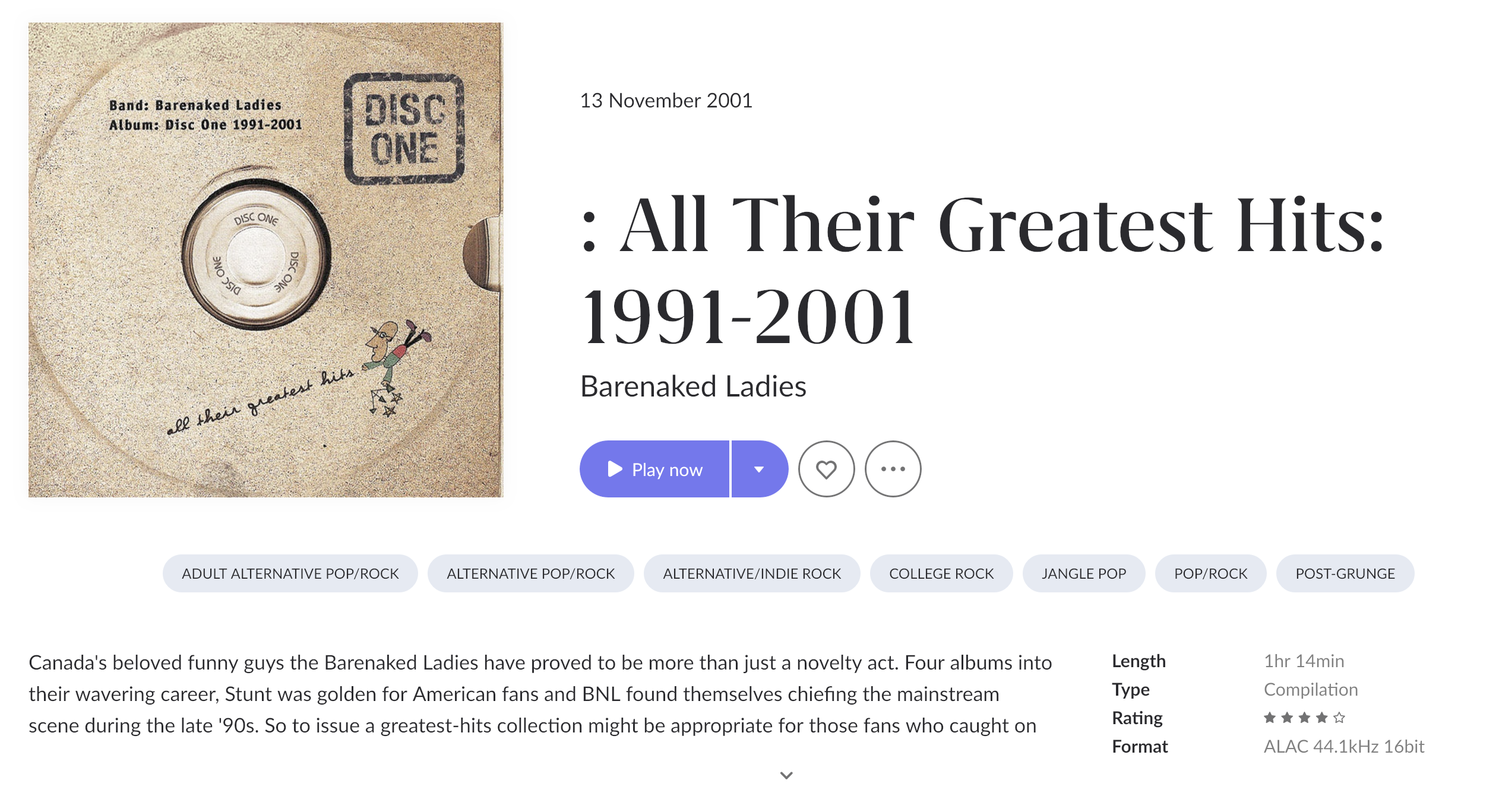 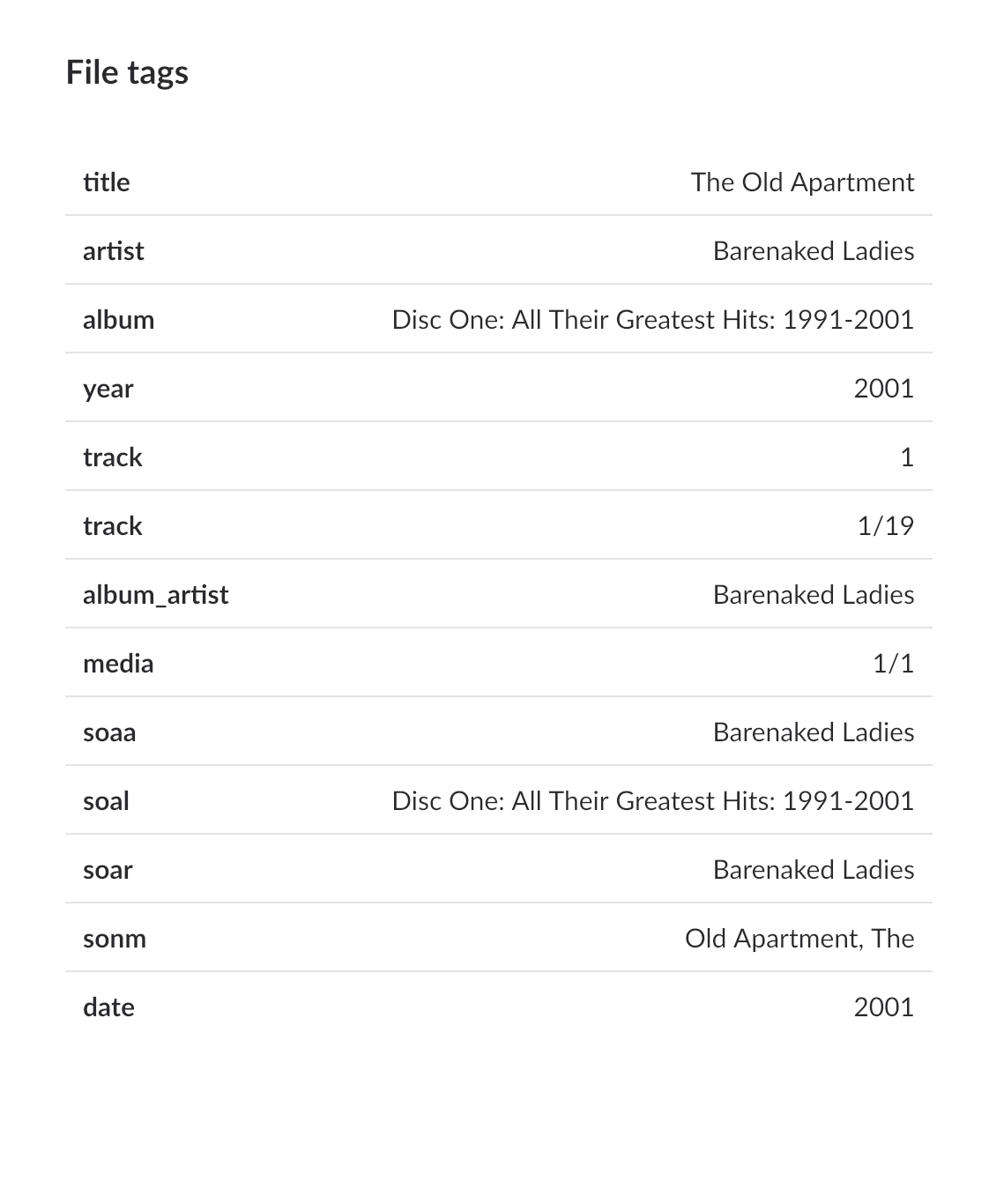 As for the Conet Project album, it’s not the slash that’s the problem, it’s the fact that “CD5” appears in the album title, which, again, Roon refuses to ignore because it assumes that my files are not tagged correctly and therefore it thinks it must do something to fix them. It’s pretty insane that even the “Prefer File” option doesn’t work for disabling this behavior. Also, the forward slash is actually not listed in my tag delimiter settings so that’s not the problem.

Ideally I would like to not have to make a bunch of manual edits in Roon every time I import music. Whenever a piece of software makes me do something like that, I end up needing to remember the problematic files and repeat the process manually in the future, so I really wish it would just use the information that already exists in the tags.

Since Roon seems to be making this process very difficult, I think my new plan will be to write a bash script that generates a bunch of hard links to my music files, inside a completely separate directory structure that will hopefully be agreeable to Roon, so I can have my “Roon” files and my “iTunes/Plex/VLC/everything else” files that are really just the same data. I can’t believe I need to do this to appease an $830 piece of software, but here we are. Too bad it’s not open source. Besides “Disc” and “CD”, are there any other words that cause problems when Roon sees them in the name of a directory?

Also, you mentioned that Roon can get information from MusicBrainz. All of my music is already tagged with MB data and there is a musicbrainz.txt file in every album directory that contains the UUID of the corresponding release in MB. Is there a way to tell Roon to use that information somehow, such as by placing it in a tag or a different file name, so that it will always look up the correct album without needing to guess?