@joel, surely if the artist, album, track names and sequence line up and the only thing missing is that Roon has no duration metadata Roon should identify the album or at least offer the option to do so as a configurable behaviour? I’ve many, many albums like this when I start looking at unidentified albums. 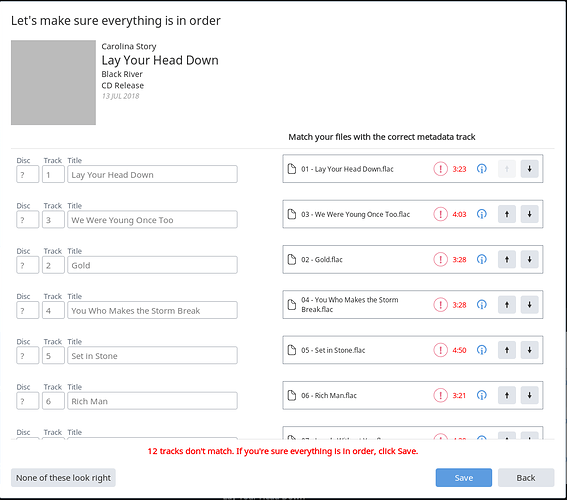 We do not have the track names. In these cases, the track titles on the left are merely reflecting the contents of your file tags.

Thanks @joel, given what you have matches, would it not be reasonable then to identify the album or at least offer the option to do so as a configurable behaviour?

@joel, I also did wonder how this magic works in roon.
I recently stumbled across some B-52’s albums where I finally found a note that the european album releases had some titles with a completly different tracklength (some tracks) against the US version. (After I asked myself if being to stupid in getting the rips done / defective turntable or whatsoever)
After import the album was unidentified. Just had a quick look not and all my B-52’s album are identified by now. So there seems to be some learning curve somehow?

Nevertheless I would also like to see an option allowing me to turn tracklength from ‘precise against loose’ to not prevent getting an album identified. Would help along some vinyl rips which tend to not always match lengths information from providers, even if the tradenumbers labels and so on do match.
Might become obsolete once roon really tries to detect not only ‘an album release’ but ‘the exact release’ which I think is still some miles ahead.

Yeah – this happens all the time. This needs revision & improvement.

If I can reiterate my previous comment: we do not have any track information for this album. It’s what we call a “trackless edition”. What you are looking at are track titles from your own file tags, and the tracks are ordered by either the track numbers in your filenames or file tags. It’s what the metadata will look like if you accept that identification choice.

Automatic identification requires that the match meets a threshold of confidence. Tweaking that threshold is something that happens from time to time, but when the album data lacks any information about tracks (as is the case in your example above), realistically that threshold is never going to be met.

At this time, we don’t have plans to present all users with a list of potential matches for unidentified albums, as most users rarely fix identifications manually, if ever. For those that do, we provide a mechanism for focusing on unidentified albums and the (re-)identification wizard, but of course you should feel free to make your preferences known in the Feature Request area, so we can gauge interest.

Trackless editions haven’t always been in Roon; we added these to our metadata database, because often they contain good artwork and other useful album-level metadata. Sometimes they are also placeholders for track metadata which get added later, and sometimes we make improvements in our processing which adds richer metadata, so note that if you match up your album to a trackless edition, the metadata may get better over time.

I get what you’re saying re it being a trackless album (understood that from your earlier post).

Re the additional insights you’ve provided in your follow up post I have an observation and two questions.

Your last question made me setting this one to ‘watching’ since I’m also interested in an answer to this.