Most ripped albums I have imported from my computer to Roon Nucleus+ are identified and show wrong track numbers ranging from multiple 0 to 99 for a 12 track album. Metadata in the imported XML file are correct! Which configuration has to be set for getting a correct identification? Example: 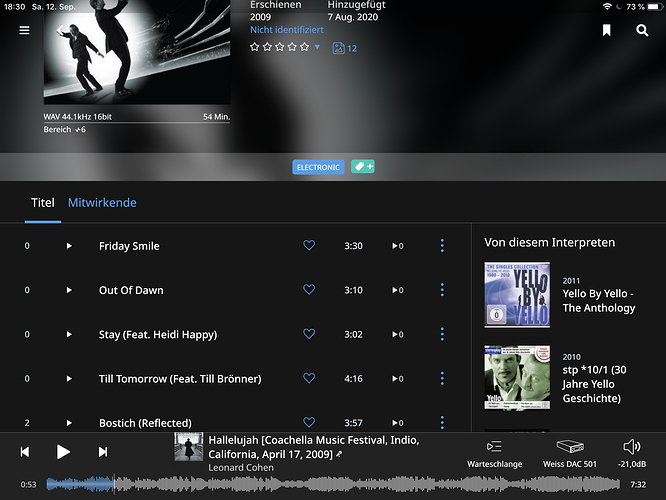 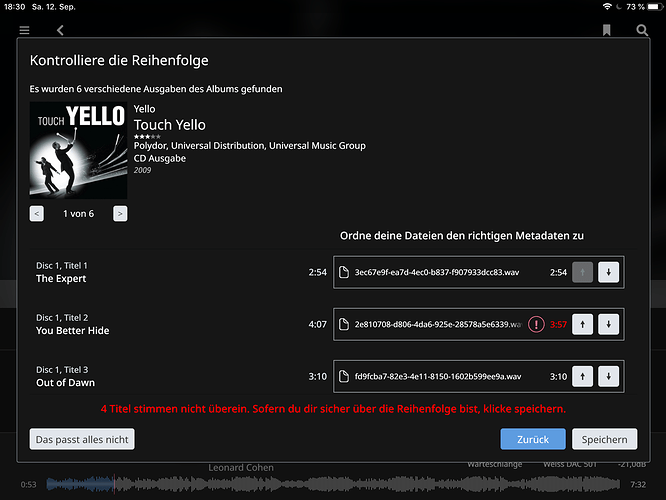 You are referring to an album with wav-files with GUID style name. That will not do… What have you used for ripping these?

Roon will identify an album correctly if the tracks can be sorted alphabetically by their names, and are contained within one folder, representing the actual disk.

Further, wav files cannot contain metadata and at the same time conform to the standard. Some software will allow for ID3 chunks and read those, but it’s a hit or miss situation.

You are referring to an XML-file? I have tried lots of ripping software in my days, but have never come across one that produces xml-files along with the files? Roon is probably completely oblivious to those files and therefore you get bad results with identifying.

Have a looksee here also, most things explained:
https://kb.roonlabs.com/FAQ:_Importing_Music

Many thanks, Mikael. As far as I am informed EAC was used for ripping. Thus would it be better to rip into flac instead of wav? The track numbers and titles/artists are correct in the xml-file created during ripping. The strange thing is that track numbers displayed by Roon doesn’t match the title/artist and most (!) albums are labeled not identified.

would it be better to rip into flac instead of wav?

Roon will figure out most albums either way, but what is important is the order of tracks, and their length. And without being able to interpret the XML, the tracks need to be named so that they appear in order when sorted by alphanumerical standards.
Oh, and multi disc albums should have their individual discs in separate folders called “CD1”, “CD2” etc.

I personally prefer FLAC as i have several other playback solutions, and FLAC gives me predictable results without the need for maintaining more than one library. Flac with embedded tags and covers are the most portable format today i’d say. The exception would be iTunes/Music…

Ok, Mikael. But isn’t it most strange that the algorithms in Roon are unable to find or correlate the correct track numbers of these wav-files even if the track lengths are matching with the Roon database? I guess this is a bug in the Roon software.

Roon will look at a folders content in three ways for primary identification:
Number of music files in folder and length of each track in their alphanumerical sorting order.
If this doesn’t provide a match then embedded metadata will provide more clues to what album this might be.

If your tracks are named as GUIDs, they will be unordered since GUIDs are by nature random. So, get your file naming straight, and Roon will find the albums just fine.

And no, this is not a bug in Roon. You need to get your rips sorted out.

Probably you are right, Mikael. However it is most strange that Roon can not always identify an album and the correct track numbers from a wav-file even when there is no other album version and the tracks’ lengths are absolutely identical! The reason for my astonishment comes from the fact that for some few wav-files the automatic identification works as expected. For the non-identified albums I just have to move the tracks to the appropriate place given by the track length by pushing the up or down arrow button. Et voilà, I get the correct track number (1 instead 0 or 99). Have a good time!