Hey @Mike_Scheinkman, can you please give us few examples of such albums? And tell us the name of the country you are in.

Hey @Mike_Scheinkman, thanks for info. We will try to reproduce the issue. I’ll keep you informed how the progress goes.

I have some too.

Jethro Tull-songs from the wood.
Norah Jones-come away with me

Rather annoyingly I’m coming across a few albums with the odd missing track and finding it not very easy ( and quite often not very successful) to “repair” these with the tools in Roon.

I seem to have totally botched up 2 different copies of Rory Gallagher’s Blueprint. Would deleting the files from Roon and re- ripping the particular albums help solve this?

Unless there is a bug I would suggest it is something peculiar about the tags within the album or the folder structure that is causing the split.

e.g. on an album you see split, do all tracks have the same album title AND Album Artist ?

A re-rip might give a different result if it corrects the tags. Tag editing would do the same without re-ripping of course.

Okay,I moved the album out of the Roon watched folder - I’ve re-ripped the file (with roon not running) here’s what mp3tag makes of it

I opened Roon at it immediately picked up the addition as 2 albums:

It’s the same issue as previously with Seventh Son of a seventh Son the track at issue. 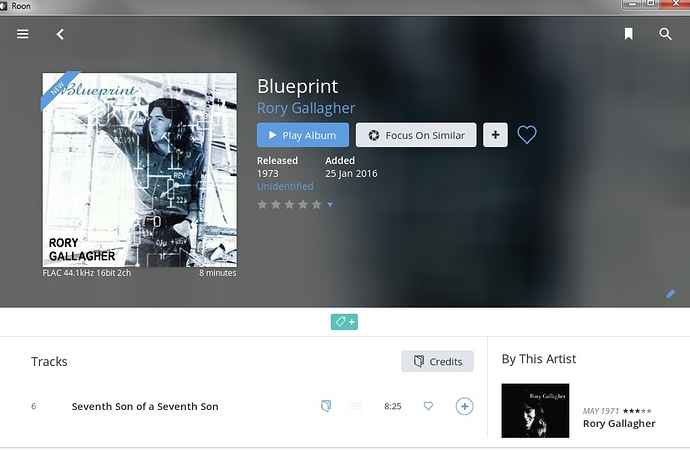 Now when I looked at the original rip there did seem to be an issue with this track, bitrate at 0. Could Roon be remembering the ghost of the previous file and if so how do I get it to forget it?

Or is there some other issue I’m not seeing? Roon only seemed to mark the blueprint with one song on it as new not the other 9 songs album. (I did check before I re-ripped and blueprint was not in the collection)

and it get’s stranger, I reinstated 2 other versions of this album and one is correct and the other shows a problem with the same track but puts it in as track 10 reather than track 6! 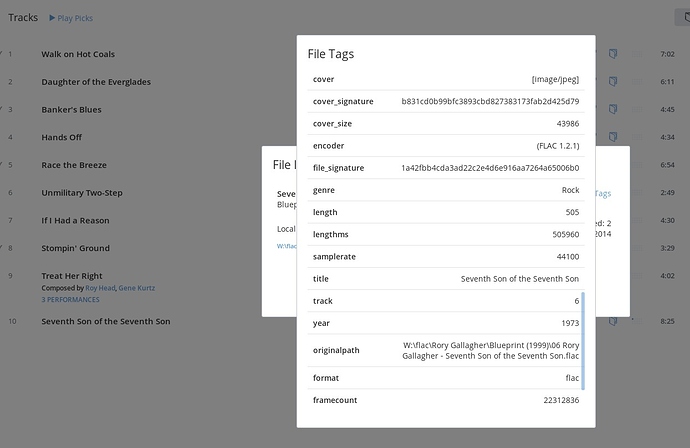 any help would be appreciated.

Hey @Sloop_John_B – I think I missed this thread a while back, sorry about that. Did you ever figure out what’s going on here?

Let me know if now and we’ll take a look, ok? Thanks!

the original rip was flawed, I just needed to clean up the database before re-ripping and all was well.

Update: Nevermind. Didn’t think to “long-press” both albums in the Album display mode. All better now!

Maybe I’m dense, but I have this issue for one album (Child is Father to the Man by Blood, Sweat & Tears). Tracks 1-8 show up on one “album” and tracks 9-12 show up on another. In JRiver they display as one album and on my NAS directory they look fine in one folder. I’ve done some rescans and reboots, but the problem persists.

How can I select both albums so i can combine them into 1?

I’m experiencing this issue currently with the latest update. Multiple albums are being divided by Roon, but not iTunes.