Album split in two albums AND changing another album 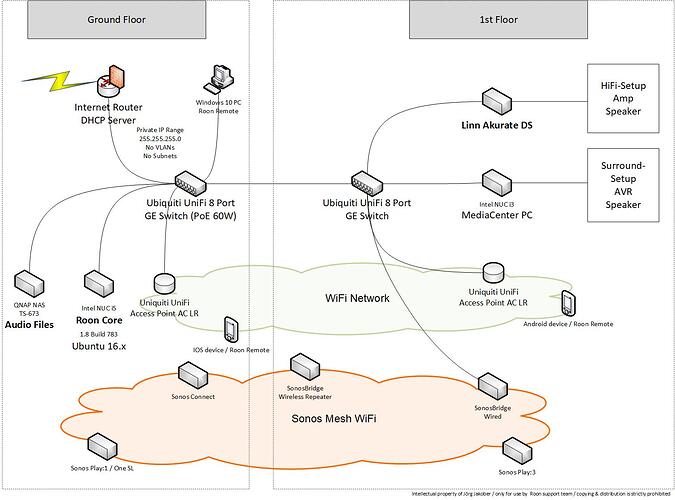 I want to report a strange problem getting stranger. Since I am using Roon I observe that sometimes existing albums in my local library are “suddenly” split in two albums with the same name.

Up to now the problem could be solved by “merging” the two albums together resulting in one album called “Greatest Hits” containing all tracks from 1-10.

Today the problem showed up for the first time since I upgraded to Roon 1.8. When fixing the first of the two affected albums it basically worked out like explained above.

While looking at the second album I found out that the problem is different and weirder. I try to explain what I see:

The album on the right side on the picture is the “real” album with that name. 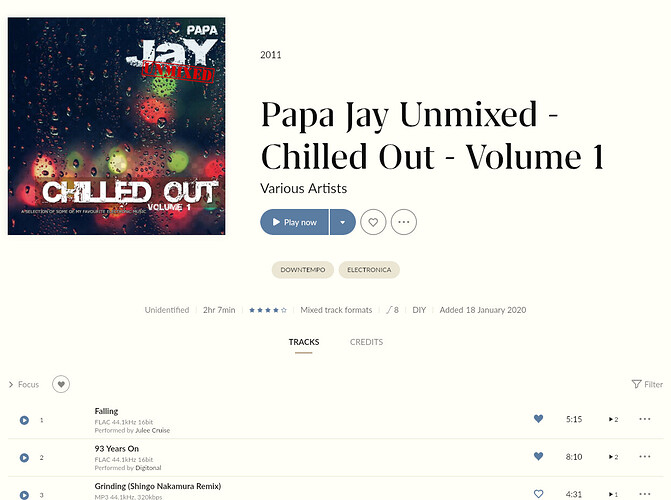 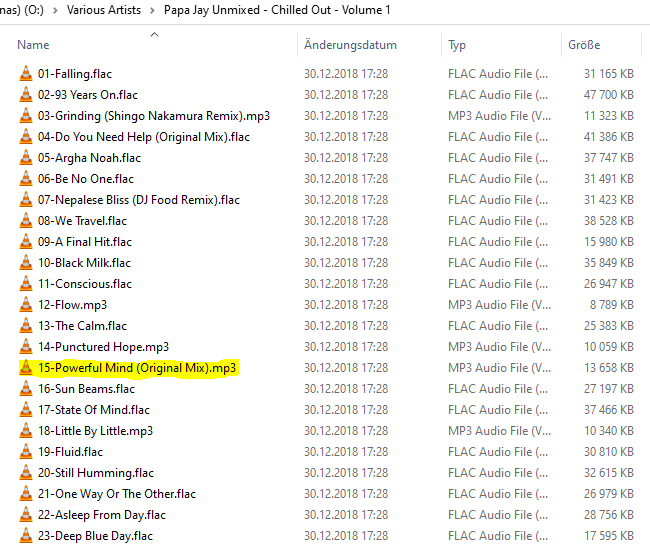 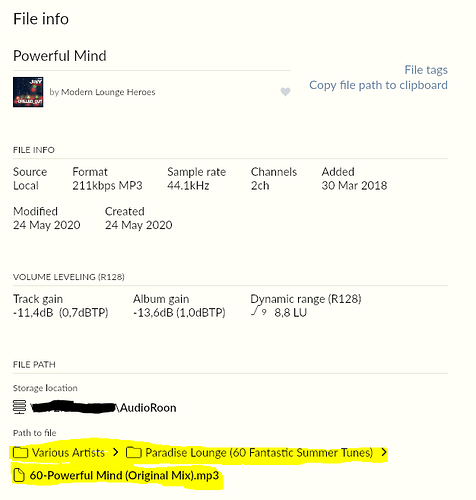 The album on the left side on the first picture is a totally different album called “Paradise Lounge (60 Fantastic Summer Tunes)”. Title and artwork are not displayed correctly but you can see other details indicating that it is a different album on its own (eg star-rating, album playing time and unidentified status) 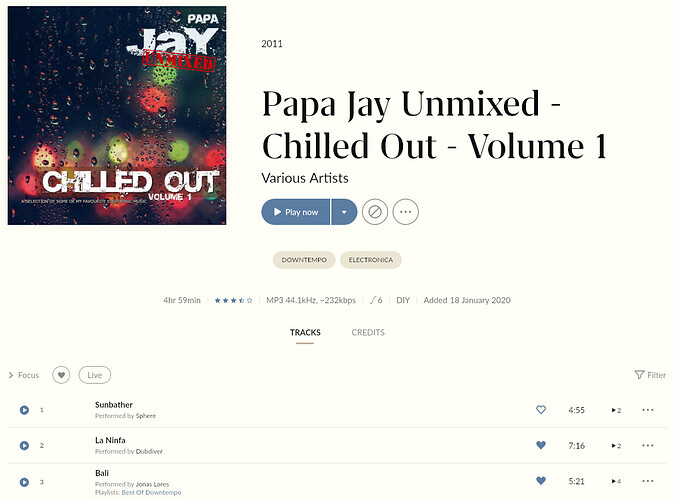 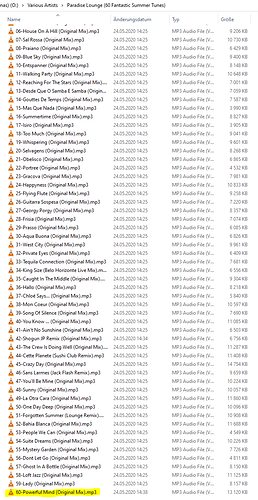 The last track marked yellow is exactly the one from the file info dialog of the other album above.

Please advise if you want any additional information for futher investigation. I didn’t do anything up to now (no reboot, no manual editing of the albums, etc)

PS: I saw a similar behaviour with another album which was split in two albums but I didn’t take any screenshots.

Yesterday I deleted two albums which have been split in two albums as described in my previous post. I deleted them and restored the directories from a backup. After the library was rescanned the albums are back but split up again.

Those two albums are compilations created by myself (this fact is also true for the album I mentioned in my previous post). All those self-created compilations contain tracks which are part of other albums in my local library. 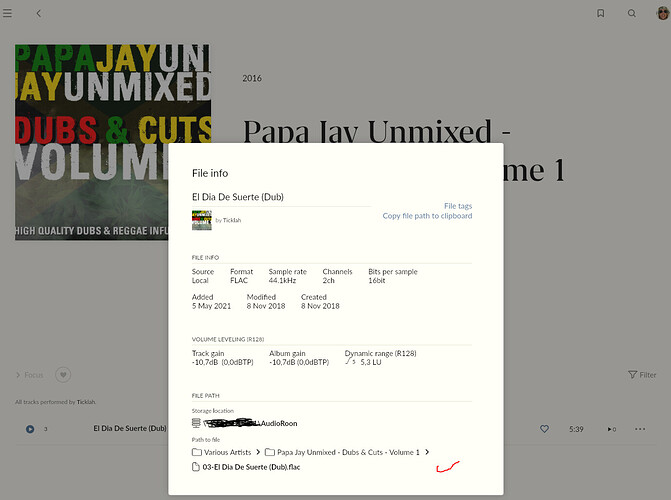 This screenshots shows that the “split” album with only one track shows the track pointing to the correct path. 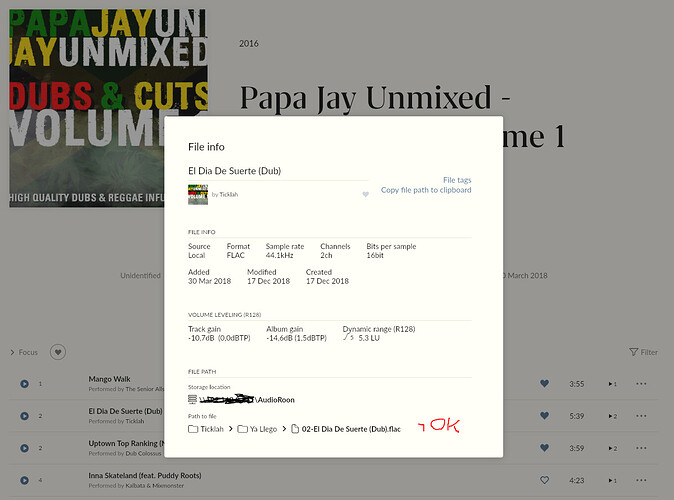 This screenshot shows the “real” compilation with the track being replaced with a link to the actual album containing this song.

@support: it would be great if you could give advise how to further investigate and what to do next. As of now I did not merge the albums.

Thanks so much for following up on your initial post and for sharing all the screenshots and details. I appreciate the effort.

To help with your request, I’ve moved this thread into our technical teams’ queue, so they can take a closer look and share any insight or next steps they might have.

Please, bear with us for a little bit longer

Hi @beka,
any news regarding this issue ?
pj

whenever I have had this problem, it always has been that something in the metadata makes Roon think they are different albums. Sometimes a misplaced space, misspelling, inadvertent punctuation, etc…usually in the artist, or album title (but not always).

Thanks for sharing your thoughts @Neil_Russell. I checked for problems like that multiple times but wasn’t able to find any differences… but I am pretty sure that one of the problems is related to the tagging.

As pointed out earlier all affected albums are DIY compilations. I used songs from download purchases from various sources and cd rips from my own collection.

I only replaced the album name and the cover art, did a renumbering of the tracks and set the ALBUMARTIST tag to “Various Artists”. The rest of the tags was left unchanged.

What I did now was cleaning up all the unwanted tags which were left in some of the files (tags like DISCTOTAL, TRACKSTOTAL, BPM, COPYRIGHT and tons of other stuff)

I deleted the two albums (*) and rescanned the library with the new “clean” version of my album. Let’s see if this works out.

(*) What I found out is that when I delete the two split albums I also delete songs from different albums because the references are wrong (see my post above). I really have to focus that I don’t damage other albums in my library.

I’m sorry that there was no reply up until today - please, know it is not from lack of trying. Our technicians are working as fast as they can to get back to everyone we send their way.

Could you please give us a little more of your patience? I’ve circled up with them

Would you please send one of these albums to us in a PM? We’ll take a closer look.

Hey @dylan, thanks for getting back. I’ll try to zip everything together later this week.

Hi @dylan … totally forgot about this one… I zipped two examples, a few screenshots and a readme file… download link will be sent via PM shortly…

Hi @dylan: any news on this from the team ?

Hi @support,
could you check if this problem has been investigated by the team (as mentioned in Dylans post from june, 16th) and if there is some feedback available. I left all the affected albums untouched for six months now (just in case you guys would have needed some additional information)
pj

I am so sorry that we’ve only just now been notified of this thread. Dylan is no longer a Roon employee, so this explains why you’ve never heard back from him. Apologies.

Since I’m just now catching up, it seems like the last note on the investigation was merging the two albums. Is there a reason why this does not work?

Fix Track Grouping is an extremely powerful feature that can help you: Merge albums if you're having difficulty with our Merge Albums feature Split multi-disc sets into individual albums Merge multiple discs into one disc Move tracks into a new disc...

hi @beka ,
thanks for getting back.

Since I’m just now catching up, it seems like the last note on the investigation was merging the two albums. Is there a reason why this does not work?

I tried to explain my concern in my initial post. It’s not only about the albums being split up… it’s about the fact that certain file infos of an split album point to a file of another album.

I am afraid that there are more wrong references in my database. If the problem could be narrowed down to my special use-case I would be reliefed.

I hope things are getting clearer if you read this and my initial post again.

Thanks for your patience, again

I wish this post of mine was a solution, but I am afraid we couldn’t recreate this issue on our end, using your archive (particularly Ruby’s Revenge).

Would you please fill in the gaps or make corrections to the understanding we have so far:

The problem is that in Roon, on the Compilation B details page Track #1 comes from music/Comp A folder and not music/Comp B. Is that so?

hi @beka ,
thanks for getting back. your summary is correct.
pj

Thanks so much for confirming. This is a good step forward.

Could you please grab a set of logs, zip up the entire folder and upload it in our drive? We’re hopeful that, even if we couldn’t reproduce the issue, the data would tell us more about what’s going on

Hi @beka
I uploaded the logs as requested.
pj

Many thanks for the reply

I have checked with our team, and I discovered with dismay that I was also supposed to ask for one more thing and I didn’t. Apologies. What was also needed was your Roon/RoonServer folder - the entire folder.

Would you please stop Roon from running and upload the entire folder in this drive:

Sorry about the extra step

Done. The file has been uploaded.