Albums All Messed Up

Nucleus. Mac. KEF LSX zone. Music on External HD. Lately Roon keeps losing connection to audio. When that happens I turn off Nucleus, wait a minute, turn back on, all is well again. But a few days ago nothing would work. Music would play for 30 seconds then ''roon lost control of audio device." So I clicked DISCONNECT Nucleus core in Settings and I guess everything scanned again? At any rate, I lost a ton of homemade album covers, and the first few pages of my music are all dated Aug 3 ''added" which really sucks. Wondering if I go to my last back up would this restore everything? Or too late? Thanks for any help.

It sounds like you might have connected back to a different core (local one on the Mac, rather than the Nucleus) … can you double check.

In the meantime I’ll tag @support to follow up with you.

Hi Carl thanks for the reply. No I definetly connected back to Nucleus. I’m now noticing I have two versions of same albums on some albums.

Another place to check is Roon --> Settings --> Storage just to make sure only one watched folder is looking at the file system where these file are (having two will result in duplication).

After than I’m all out of ideas and we will have to see what Roon support come up with.

Can you share screenshots of Settings > General and Settings > Storage?

Hi Guys. Well Carl you are on to something. Looks like two watched folders, but confused as to how and because they are from same drive, but I suppose because of the Tez Music folder, which is where my music files are. Resetting must have pulled from the G Drive itself? I now see ''versions" of albums with the original there with artwork. So do I have to now go thru and delete the latest, non artwork versions? If so do I “delete” or just ''hide" the version? Here are pix 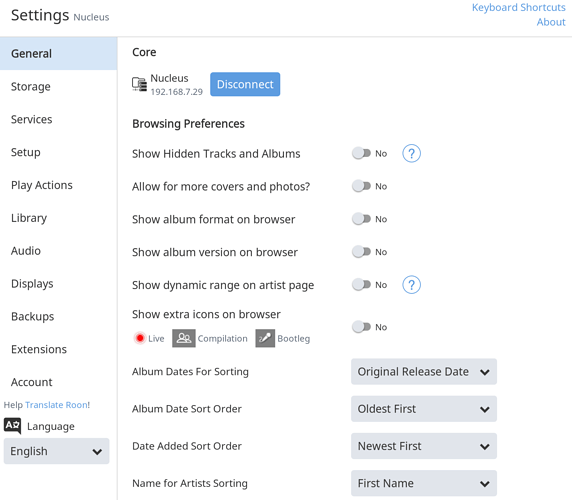 oops. wrong screenshot lol. here you go. and thanks! 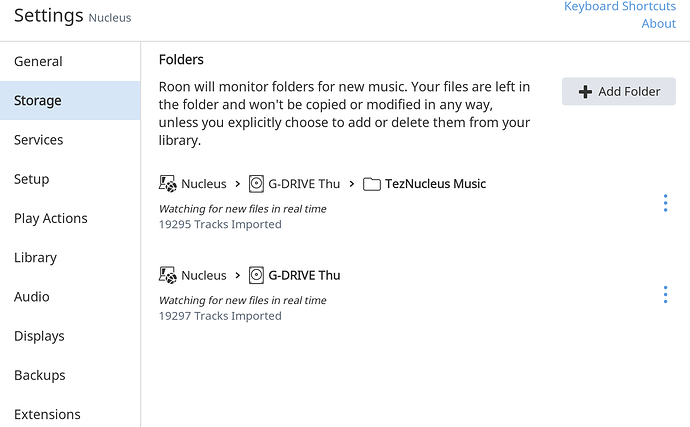 Looking at your screenshots, I see that you have the TezNucleus Music folder in twice. By choosing the G-DRIVE Thu folder, that includes any sub-folders. I would suggest removing one of these folders.

I would suggest removing one of these folders.

Remove the Watched folder that was added last … as this is where the new additions (dups) are coming from. Once removed and you happy with what Roon is displaying … go back to settings and perform a library clean up.

I’m not sure which one was added last? Is it the G Drive, the second one? And why would there be a different number of tracks imported? Thanks

Because there are 2 rogue music tracks that are outside of the other location. (i.e under G-Drive Thu, but, not under TezNucleus Music.)

I’m not sure which one was added last?

Pick one and disable it … then check some sample albums … if they have your edits / album art as you expect then you’re good.

If not disable the other watched folder and re-enable the first … then recheck.

Once you are 100% happy … remove the disabled watched folder and run a library clean-up which will removed the unintended duplicates from Roon’s database.

Thanks Gentlemen! That worked. Now just not sure of the clean up action. Here’s what it looks like, do I check all the boxes ?? Thanks so much! 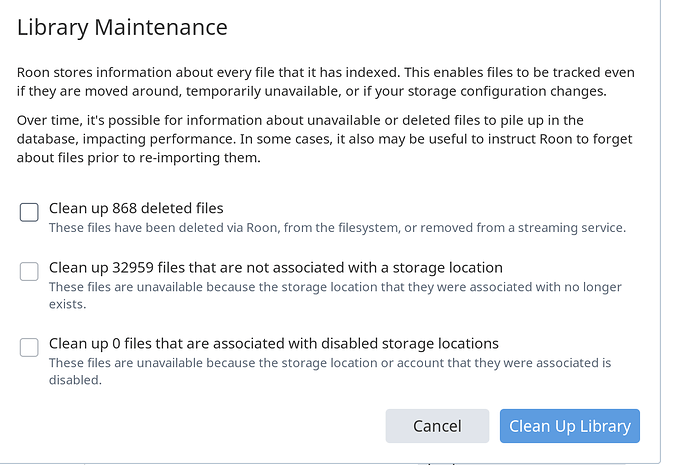 Checkbox #2 will removed the duplicates that were create due to having the files watched twice. So go for that.

Checkbox #1 will remove information about tracks that you have previously removed from Roon … I would go for that as well.

Checkbox #3 shows that it will affect zero tracks, so at present doesn’t matter if ticked or not.

Ok that’s what I figured but wanted to be sure. Thanks everyone you rawk!! Cheers!