I got a problem with Ozzy Osbourne, his albums keeps disappearing from Roon. They are on the server with correct tags. I can search for each album, klick edit - Identify Album - Select the Album - click Save, then the album reappears under Ozzy Osborne for a short while then just to disappear again. 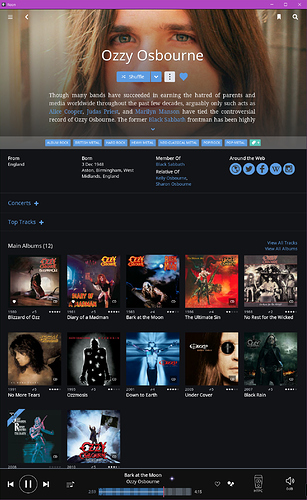 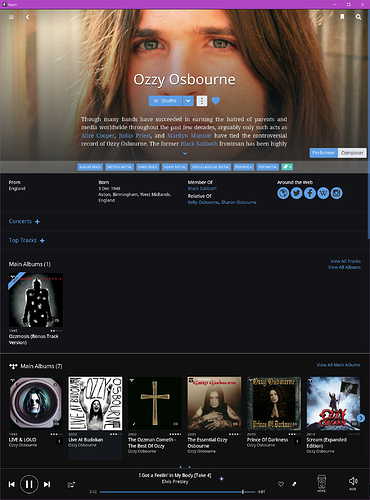 Apologies for the delay in getting back to you here, have you tried rebooting the Core machine and the behavior is still the same? Do those albums still show up in your Album browser page when searching for them in your Library?

Yes the Core has been rebooted many times with the same behavior. And I find the albums if I search for a particular one. But maybe I found something, when I do a search for Ozzy Osbourne, Roon do not recognize that he is an library artist, I must select TIDAL Artist. I do have most of Ozzys album on the server but not all. All the FLAC files has the correct artist tag, I rechecked.

Thanks for confirming that for me @Olof_Andersson.

I am wondering, do you by any chance have any Ozzy albums saved in your local library on a NAS or hard drive? How does your Roon Settings -> Storage Tab look like, can you please post a screenshot?

Do all of the albums show up as expected under the Albums browser tab if you search for them manually? Please let me know when possible. 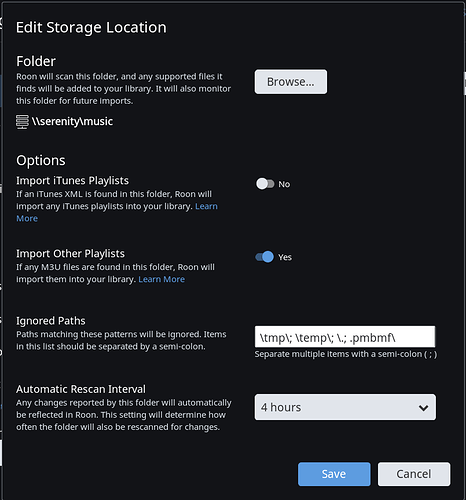 image.png805×863 58.5 KB
Here is my storage Tab, the server name is serenity and all music files are stored on the volume music. 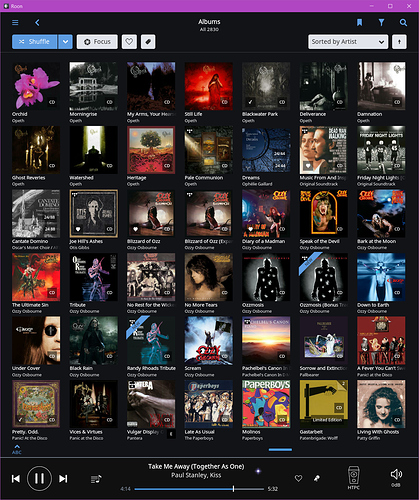 I have had this problem recently when adding albums from tidal into my library. Items on my HD will disappear from the artist>Album View.

rebooting the core seems to get things back to normal, but the issue seems directly related (in my case) to adding Tidal albums. When it happens the Tidal albums stay visible but the library ones randomly come and go.

I did notice that Roon had created a second “Prince” artist (same spelling same meta, same pic etc). I merged them but it seemed to be ancillary to the issue, still needed to reboot the core to get back everything.

Actually another "Prince " has once again emerged lol. This is after multiple Merges 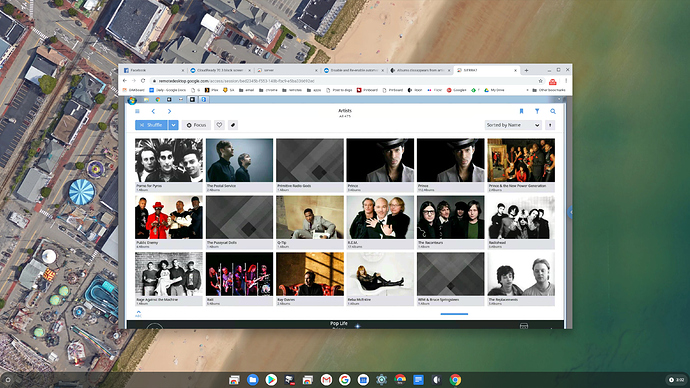 Thanks for your reports. We have seen similar behavior in another thread where we spend a considerable amount of time trying to reproduce with the user (Albums not appearing on Artist page but in library - UPDATE 2/1/16 - mostly discussed this issue via private messages) and unfortunately have not been able to do so. Without a way to make issues like this occur in a development environment, its extremely hard for our developers to resolve them – basically, it’s difficult to fix issues that we can’t see.

There are some architectural changes coming to the artist screen in our next release, which may help here. If I’m understanding correctly, all the issues you’re describing happen on that screen right?

I don’t have a timeframe to share about when that release is going live, but if things are still not working as expected then we can take a look at your database directly. In the meantime, if you’d like to do some additional testing to help us understand this issue, you might try testing temporarily with a fresh database. If the problem goes away, that will be a good data point for our investigation.

Apologies that I don’t have a more immediate fix here. This issue has been extremely tricky to nail down, so waiting for the next release and verifying if any of the changes we’ve made help would be the best path forward. If you have any other questions or observations, please let me know.

@Derek_Wyman @noris Actually, this may be related to Roon’s db/server temporarily going down.

Over the weekend (I think it was Saturday) I elected to uninstall & re-install Roon. One of the reasons was the sudden & unfixable splitting of my Prince albums into 2 artists; one with ID’d albums & Roon info & pic, and one with no pic, no info, and only un-ID’d albums. The same thing happened with my X albums, and my Grateful Dead albums.

However, when I went to the Roon d/l page, the server was obviously down, as the install pgm was trickling in at ~10kbps/sec. Tried again several times, but gave up.

Sunday AM I was able to d/l the Roon pgm, installed it, and all my Prince, X, & GD albums gathered together under one artist, as they should.

In short, even though I have no details or logs to offer in support, I think I’ve seen this behavior several times over the years w/Roon, and Prince has always been a leading indicator for me, and it’s always been traced to a time when the Roon server was down.

OK – My Prince stuff is ‘divided’ again, and Roon’s server is apparently up, so you can ignore the proposed correlation I wrote about above.

Here’s what I get when I search for Prince; note there are 2 artists…one w/pic (ID’d) and one without (no info): 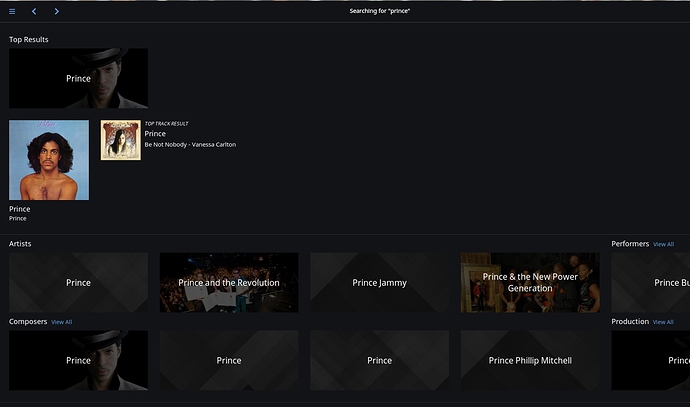 Here’s what I see inside the ID’d Prince w/pic. All the albums are ID’d by Roon, even several bootlegs with their minimal info: 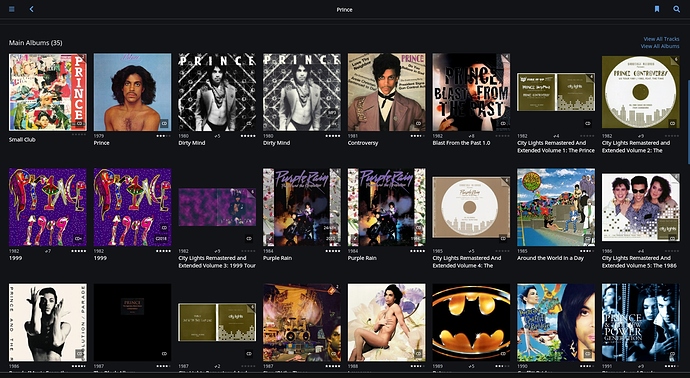 And here’s what’s inside of the no-pic, un-ID’d Prince; all my remaining un-UD’d Prince albums: 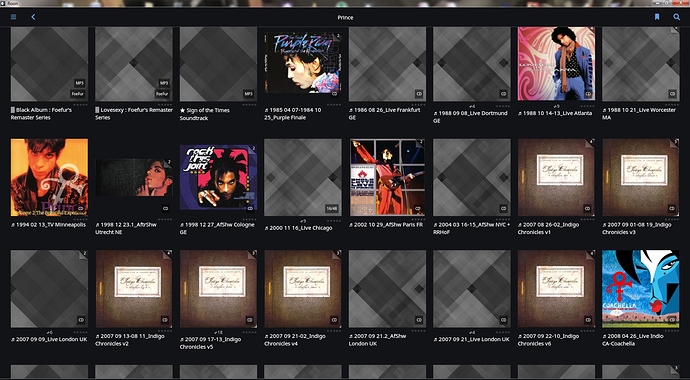 Right now my X and Grateful Dead albums are not ‘split’ like this. Prince is the usual suspect, but He’s also on the 1st page of my Artists-by-# of albums page…so I would naturally notice his absence (when he ‘splits’ he drops off page-1). I suspect others artists are similarly affected by whatever this ‘bug’ is.

Also, fyi all these are local files; I don’t use Tidal.

And yes, in the past I’ve ‘solved’ this w/merge artists, but I shouldn’t have to, and Prince was not split earlier today, and if I leave it alone, I think it usually re-combines by itself at some point.

yeah, I can’t even merge the other princes, they are persistent.

Not a huge deal since they all lead to my entire catalog, but a bit annoying.

EDIT: I tried renaming one and it split into 4 Princes. Serious Gremlin sh%t going on here

We have looked into this “artist split” issue in the past and don’t have a clear way to reproduce this in the lab, but I would still like to gather any info we may need for a further investigation in the future from both of you.

With that said, if you would like to assist this investigation, you can do so by:

If you would prefer, you can also PM me a link to the uploaded database in case you don’t want to share it publicly. Please let me know if this is possible and then we can have the database to reference in the future if we are able to schedule some time to look into this behavior again.

I don’t know what originally causes it but i can reproduce it at will. If i edit either artist name field it will split again (and again). I will send db when i get home.

I am also having this problem with Prince