I have a Qobuz US Beta subscription. And I’m not sure if this is an issue on the Qobuz end or with Roon itself but…

I notice that if I ‘favorite’ albums using Qobuz’s iOS app, desktop app or web player, Roon is not automatically adding the albums to my Roon library in the same way that it does with Tidal. Interestingly, the albums do almost instantaneously show up in the Hamburger Menu->Qobuz->My Qobuz section of Roon, yet I must still manually save them from there to make them show in the main library.

I’ve tried manually syncing Qobuz in the Settings->Services area but to no avail. Even after a couple of days of waiting, they are not showing up in the main library on their own. And the problem is persistent, not sporadic.

It does work fine in the opposite direction… when I add a Qobuz album to my library from within Roon, the album will show up as a favorite in the Qobuz app. So it’s only the Qobuz->Roon direction where the issue lies.

I could have sworn that this all worked correctly when 1.6 Roon first dropped and has somehow changed along the way. I could be mistaken about that tho as I mostly save within the Roon interface and only occasionally use a Qobuz app, so it’s possible the issue could have been there all along.

Anyone else seeing this, or have any insight for me?

Flagging @support re: Tracks and albums added to Qobuz favorites not being added to my Roon library. See previous post for full explanation.

Had hoped for a response from the general community before bothering support staff, but my issue hasn’t gained any traction there.

I just tried adding a new album in the Qobuz app and it showed up as expected in Overview, Albums Browser and My Qobuz as expected after a manual sync in Roon Settings -> Services. Where exactly does it not show up in the “main library” for you, album browser?

How are you sorting your Album browser listings, are you using “Sort by Artist” or “Sort by Date Added”? Can you provide any screenshots for this behavior?

That is correct. Albums added using the Qobuz app will not show in either Overview or the main album browser. I typically keep my main album browser sorted by ‘Date Added’, so it’s easy to tell. They do show in the Qobuz Favorite Albums section via hamburger menu, and they get synced there almost immediately after being favorited in Qobuz app.

Here are some screenshots that’ll show what I mean. Three examples right in the top row of the Qobuz Favorites window, the two Bartok albums & the ATYS album were favorited in the Qobuz app. Some others like the Mendelssohn titles lower down as well. They won’t show in the main browser window. All the Qobuz titles you do see in the Main Browser were added from within Roon.

And thanks for your assistance. 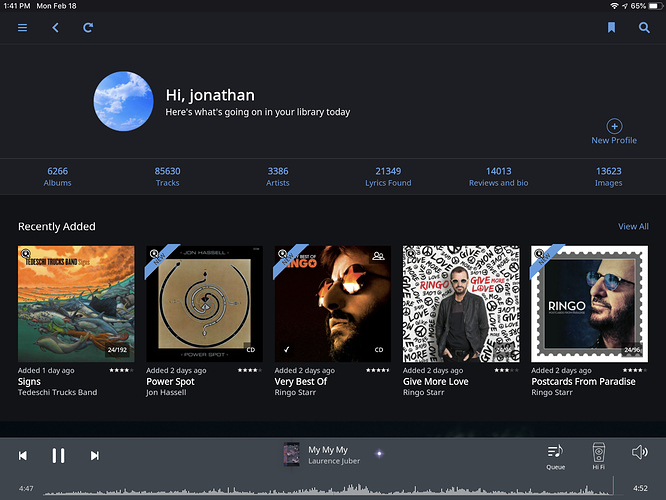 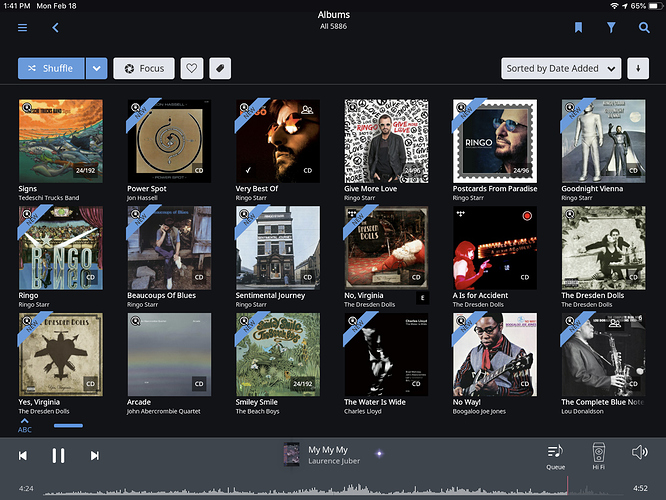 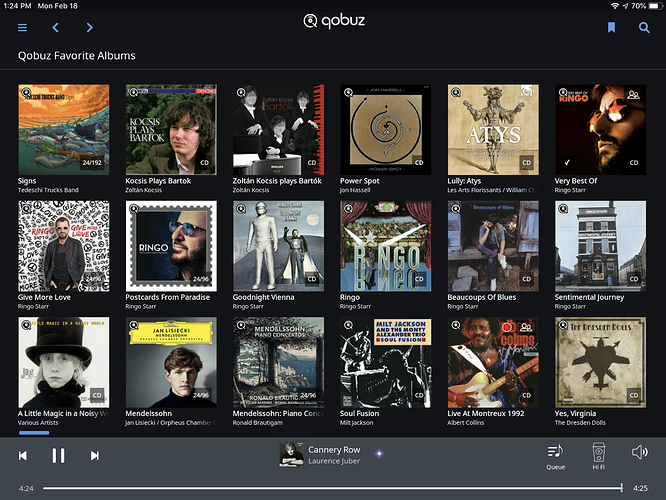 Thank you for the screenshots. I have been able to reproduce this behavior and I opened up a bug report with our developers.

Thank you. Much appreciated!

I’m seeing the same behavior with Qobuz albums favorited in the Qobuz app not showing up in my Roon library. Restarting the Roon Server app on my Core (sonicTransporter AP) is an effective work-around for now.

Well, this issue has been resolved for me in the new (build 401) update! Albums saved in Qobuz app now sync automatically to my Roon library within a short period of time, or immediately if I manually sync in Settings.

And… excellent graphical tweaks in this update as well.

A big thank you to all support and developer staff!