Albums found in Tidal, but not in Roon

Sometimes in forums I post in, people send Tidal-links to albums. When opening link directly in Tidal I find the albums, but when trying to search in Roon in order to save those albums in playlists - I can’t find them. 4 examples below. If clicking the Tidal-link, it’ll open up nicely - but when trying to find it via Roon, I can’t.
What am I doing wrong / Is there a workaround for the way I search / Can Tidal-links somehow be opened in Roon?

Am I the only one with this issue?

Did you add these albums or press the star beside them while in Tidal?
This should make them show up in you Roon collection although there may be a time delay while Roon and a Tidal synchronise.

I did not, but will try. Seems like a cumbersome way of finding albums - what’s the point of Tidal integration then?
Yes - I see the point when being sent Tidal-links since they won’t open directly in Roon, but it doesn’t adress the main issue: ROON’s search engine against the Tidal-library - or be it Tidals search engine, has some flaws.

A good suggestion for next version of roon might be to accept Tidal-links?

Have you tried to search for them in Tidal without the help of the link? If you try that you won’t find them either so I think the fault is not in Roon’s integration but with Tidal’s search

Yes - can’t find them. Actually, what I just discovered is that when I click any of the links above, they open up on Tidal’s website with songs, album cover etc - but when I click “Play in Tidal” - it won’t open up the Tidal app. Instead it opens up Tidal-on-website, and says the page is not found. 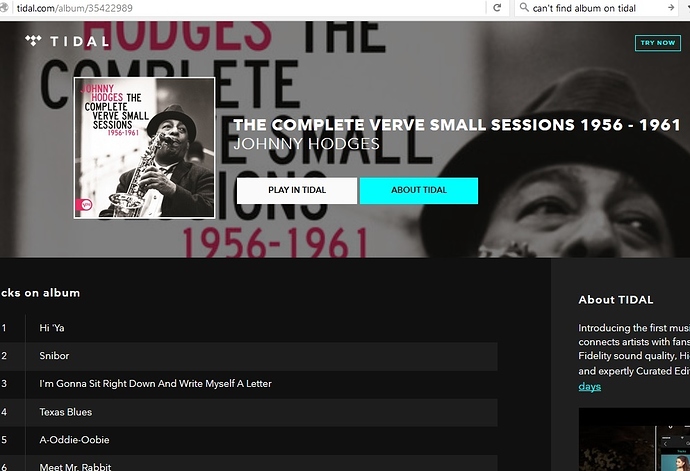 Tidal_error.jpg993×679 113 KB
This is what I see when clicking the link…(you can aslo see my desperation in the top right corner searching for help…) 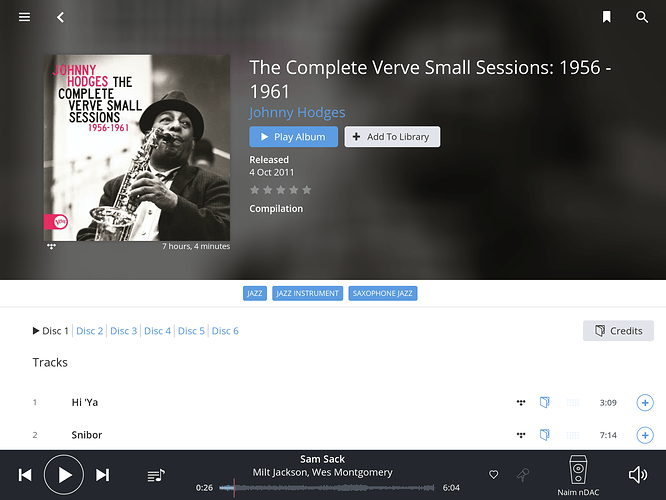 It works fine in Roon for me.
Actually looks a great collection, I have let my Tidal subscription run out as I predominantly want to use Roon initially to "rediscover " my CD collection, but I’ve added this and it will be waiting for me when I resubscribe to Tidal.

This is very strange. I’ve tried with VPN’s and on site in different countries…
How did you find it?

It seems to be something about the fact that my Tidal-account is ‘based’ in Sweden…
When I log out, I can suddenly access the “next step”. This is very strange since I have a whole bunch of Verve albums…

Another update to this topic. I’m really starting to wonder how the Tidal-implementation in Roon is done.
As some of you might know - there’s sometime multiple releases of the same albums available on streaming services. New so called ‘labels’ are popping up all over the place - with sources, that we who collects music cares about, that are not really trustworthy.
Why
is this important? A bit of background; Blue Note Records has had a very extensive re-issue and re-mastering project going on for years. Michael Cuscuna has been let into the vaults and has been allowed to produce releases that us jazz-lovers never would have seen before. Rudy van Gelder has done nice remasters (another discussion…) of releases.

Here comes an example of why this is becoming a problem: When searching for the album “Goin’ West” with Grant Green, I’d like to find the 2004 Rudy van Gelder edition. In the Tidal software it’s not an issue. I can clearly see the label underneath the album description (see picture below), but I also get it confirmed in the album title where it says (The Rudy Van Gelder Edition) Very convenient.
Let’s look at when I’m trying the same in Roon. I have no idea which release it is, because it doesn’t say. For this album I can make the assumption that it’s the same version - because it’s the only one available. For other albums, there’s “labels” that have made releases available on Tidal - with altered or even changed album covers. When this occurs - I usually go to the Tidal software and look closer at the tracks. Sometimes the time for each song help deciding which one is the correct one, or just listening tests.
But as we see in the example in the pictures below - it doesn’t always work. Look at the Tidal screenshot. The three first songs lengths are, 7:03, 3:25 and 6:20. Let’s look at what supposedly is the same album via Roon. 7:04, 3:26, 6:22. Is this because it’s another release from some obscure label - or is it because of some implementation glitch??

What am I looking for? One important improvement could be that Roons tidal implementation should show the label for each release to make it easier to chose the right one.

And finally Roon again, where I show the issue with song lengths:

…Oh and when looking at “Main albums” in Roon (for Grant Green), above mentioned album doesn’t even come up.
I’m going to give this another 4-5 months but if issues like this has not been taken care of, I’m going back to JRiver + Tidal standalone software.
The strength of Roon for me is to keep online-offline-local library as a unit, especially when doing chronological playlists where some music is available (physical format ripped) and some streamed. If this doesn’t work, the whole thing falls flat for me

First picture shows the album coming from “Lilith Records”. I have no idea what that is… Look at the cover. It doesn’t have the Blue Note Records label on it and has LR stamped on it.
Second picture shows the “real” one, with the label name and record number. In Tidal it’s also confirmed by the text under the songs. Makes it easy.
But in Roon - all I find is the “LR” version…(which is connected to the right metadata), but not the one I want to have in my playlist. If the label info would’ve been available in Roon - I would be very grateful and happy =) 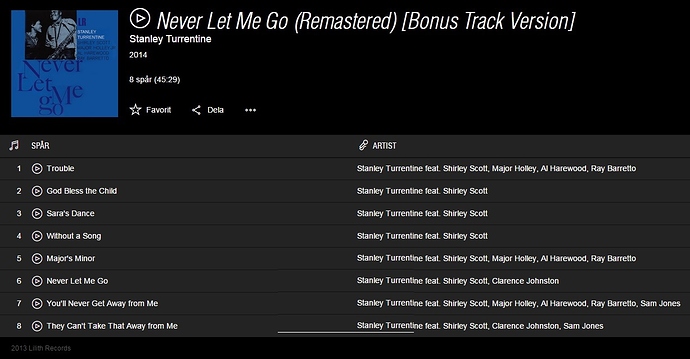 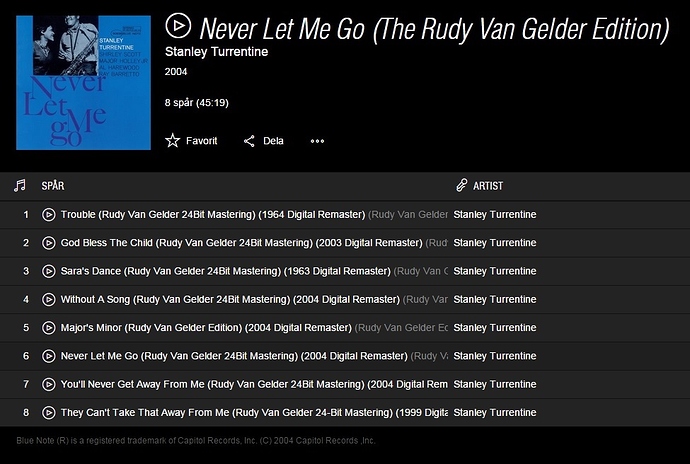 Hey @Changeling – give this post a read. I think it should explain a little more about why things look different in Roon.

Note that the work I described in that post is ongoing, with some significant changes planned in this area for later this year.