Albums in Appearances in My Library

On the artist page there is a list of albums under ”appearances in my library”, but not all such albums are listed here and I have no idea how the selection is made. As an example, I searched Jan Garbarek (turning 75 today!), and 12 albums are listed under appearances, all with Jan Garbarek in the credits and listed under performers under Focus. However, I have many other albums where he is in the credits and listed under performers under Focus, but these do not show up whatsoever. E.g. Sostice by Ralph Towner, Shankar Song for Everyone by Shankar, Garbarek etc, plus many more. So, please help me out; is there any logic in this or simply an error?

Is that appearances from the overview page or from discography?

Overview page, so in my library.

If you go to discography and scroll down you will find more appearances.
From overview

OK, but that does not answer my question. If there is a list of Appearances in my library, why are only some albums shown? And on what basis are these chosen? If I need to go to Discography then what is the point of the list under Overview? If it was complete, it would be very useful but not as it is now.

I presume because it’s an overview, as in its name. For details you go to a different page.
I’m a user like yourself pointing you to the correct section of the artist page. [Moderated]

Well, I assume the whole thing with overview and discography has to be considered somewhat of a mess. I do not see any point in the overview tab if it only shows a selection (based on no apparent logic) of library items. Then better stick with the discography tab only. But, it would be nice with an overview tab showing all relevant library items. Also, it would be nice if Roon support could respond.

Hello I just reached here as I was wondering the same.

1 - Don’t use Overview, use Discography instead
this

2 - Besides Focus, click on the Library icon
This way Roon filters in only the albums effectively partaking to my library per each of the aforementioned sections.

Not very intuitive for me…

It does seem to work in my case…

It usually does, although there can be issues where library content doesn’t show up readily under discography. Overview also follow the same View rules as does the main Album section in terms of showing alternate versions.

Should Roon clean this up? I think so. It is very confusing to have two locations without a great explanation for users to know why there are two locations.

Let me give you an example. I have every album, including re-releases by a band called Hammock. So, Hammock came out with 10th anniversary special editions, and in the case of one EP, re-recorded it specifically different, a 2020 version vs the earlier version.

In my library, I have Albums set to show all duplicates, so when I go to the Overview page I see this. 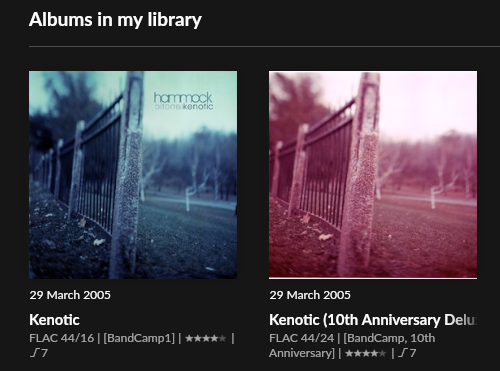 Yet, under the Discography Page, 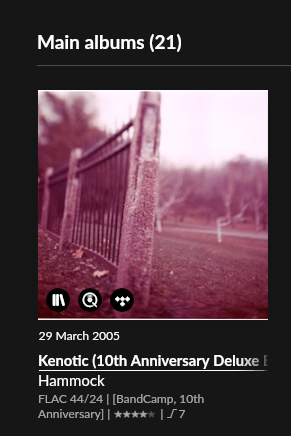 You see only the latest 10th anniversary release (which has different tracks, btw). To get to the original release I have to go into the album and choose versions. Likewise, with the Longest Year original recording and re-recording. 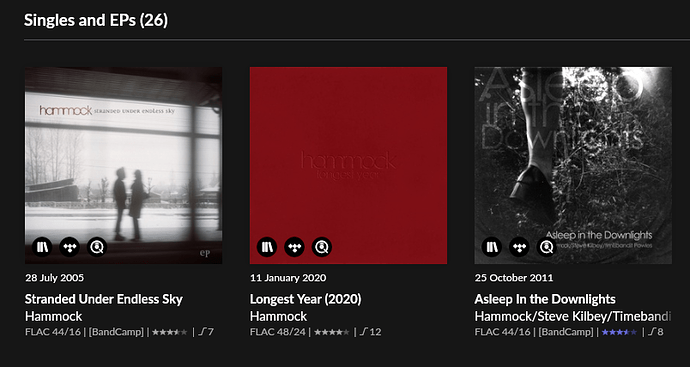 The point being that Discography is not an easy way to see everything you actually have in your library. Overview is.

First and foremost: I do agree they should finetune / streamline this part.

That being said, very personally I do prefer to have all different edition of a same title grouped under a single album entry (and when Roon doesn’t do it automatically I force it). The various versions might be either different releases (like: a US CD release, a JPN papersleeve release, a US Vinyl release, etc) or even a single release in 2 different digital formats (e.g. one in DSF / DSD128 res, and another in pre-calculated PCM 24/96 res).

Correspondingly, when I open an Album entry I took the habit to first of all look for a “Versions” tag, and if there is one, then I click it and select the specific version I actually want to listen to “now”.

So for my approach your example applies on the flip direction actually: I would group Kenotic and Kenotic 10th anniversary versions under one sole entry in the first place.

Obviously there’s not right or wrong approach. What I’m trying to say is that it must not be so easy from the programmers’ side to devine “how the user will prefer to behave” in the first place I guess.