Albums in Qobuz App not found in Roon

Are all albums which one can play from the Qobuz App also available in Roon?

I want to add to my library from Qobuz the Chandos recording of Bax’s Spring Fire conducted by Vernon Handley. I can play this in the Qobuz App but a search of Spring Fire does not reveal this recording although the Halle/Elder recording shows up.

Qobuz have not yet replied when I raised this issue with them.

I have found that problem many times. For example, if one searches for “5.1” or "multichannel,’ Qobuz returns a dozen or so in that format while Roon returns one or two. However, if I mark them as favorites/playlist (or whatever it is called) in Qobuz, Roon can access and play them. Weird.

I’ve moved this thread into the Support/Metadata category of the forum, because I think it may be something to do with the way in which Roon is parsing the metadata of the Qobuz albums.

In the example you give, that Chandos album shows up with the French title and “Various Interprets”, and is also volume 2 of a box set. It might be something of a clue for @joel ? 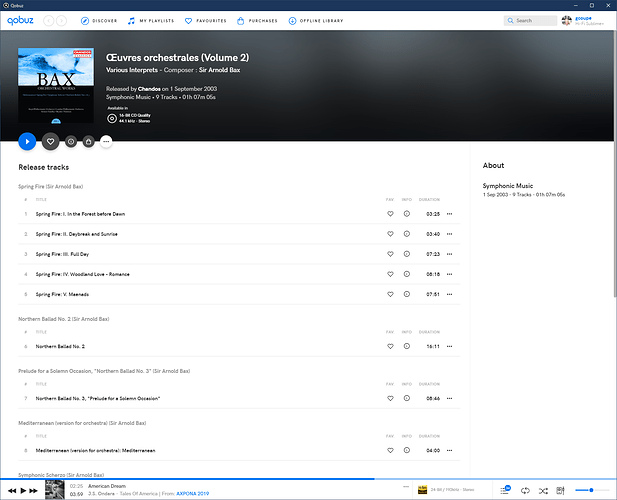 Thank you, I marked the Bax as a favourite and it turns up in my library. Still if you search the Roon Qobuz list of works for Bax it is not there, so it means the search in Roon is only partial

Can you provide the following:

Dylan, I’m seeing the same issue as Michael, so as an extra data point:

I am in the United Kingdom, the link is as mentioned by Geoff Coupe below.

I’ve passed a ticket along to the team and this is being looked into. I’ll be sure to update you when we have more information available.