Meta data rules in Sonos & Rune. Over the years I’ve meticulously edited my metadata. Roon seems to make a hash of my previous edits. I selected all albums & chose prefer file, to little or no effect.

Your suggestions please? Thanks for your help.

I have broken down complete purchases into component albums, I"ll use Van Halen as an example. The complete Van Halen puts all the files in one directory. First, I made different directories for each album and copied the files into their correct album. Then for each album I had to edit the file names and meta data to reflect tracks 1 through X and to make everything disk 1/1. At that point, Roon will see each album as a separate album. I then went into Roon and edited the Version line on all the albums to say “Studio Albums 1978-1984 [HDTracks]” which will have the box set title and source of files in brackets.

Roon will try to identify your albums and then will present its own meta-data. You can go in and highlight the album (of course once it is seen), go to settings and tell it Roon to prefer your meta-data over theirs. This can be done for multiple albums at the same time.

The next big update to Roon will focus on meta-data so I am sure the team would like to hear everyone’s ideas, etc.

Hey @P_Zwief – sorry for the trouble here. [quote=“P_Zwief, post:1, topic:11250”]
In Roon the music is totally missing. Doesn’t show up as Complete Riverside or as component albums. Just nothing.
[/quote]

Can you read over this article and let me know if it helps?

If not, can you let me know a little more about your setup, and whether these albums ever imported successfully before you edited the tags? Or have these files never shown up in Roon?

The missing albums have never appeared in Roon. I’ve only had Roon less than a week. They appear fine in Runeaudio & Sonos.

I did have the component albums in subfolders & then moved all the tracks out into 1 folder called Riverside. This change didn’t make the albums appear & in fact made more albums disappear.

I’m particularly interested in why prefer file has no effect,

For the purposes of this discussion, I’m going to assume your Library is in a folder called “Music” on your WD NAS??

And that you have pointed Roon at that folder as a Watched Folder??

Assuming the above to be true, then MOVE the folder you have currently called “Riverside” OUTSIDE of the main Music folder

Now go into settings in Roon…Storage Tab…and add another watched folder, but this time pointing at this Riverside folder

Point to note…assuming your Music is in a Watched folder, then Roon is NOT touching or modifying the ID3 Tags within the Track files…Roon ‘creates’ its own Metadata and logs this into its own database…i.e. your own Metadata is as it was before…Untouched

Your assumptions are correct. I’ll try that tonite after work. Thanks.

What say you Mike?

Did what Ronnie suggested except I moved not just the Riverside folder but the whole Monk folder. All the missing albums turn up & properly labeled. That’s the good news. The bad news is that albums that weren’t missing show up twice while the formerly missing albums show up once.

Further weirdness. When i take focus off and look for the troublesome albums they are gone again.

Hey @P_Zwief – glad you made some progress here. It sounds a bit like our duplicate detection is kicking in here – can you read this over and let me know if it matches up with what you’re describing?

If you’re seeing two copies of these albums, and you know you only have one copy in your library, it would be great if you could select a track from each, click File Info, and confirm that the paths are different (and presumably incorrect in one case).

Let me know how that goes and I’m sure we can figure out how to get your music displaying properly. Thanks for your patience @P_Zwief!

When I checked Roon this morning all the dups had disappeared with no action on my part. So I moved the monk folder back to it’s normal location & disabled the folder I’d moved it to for testing. The albums disappeared again. Furthering my confusion, a few of the missing albums show up under recently added, but not under artist sort.

Seems like Roon can take some time to update files, even when I force a rescan. Is this normal? I’ve got 102,000 tracks & use small green computer’s sonictransporter for my server.

Ok, after waiting a good 7 hours I checked Roon to see how it’s indexing the troublesome monk albums. The albums still don’t show up under artist sort. But if I do a search for monk, they are all there. Any thoughts as to what’s going on?

Can you try going to Settings and flip on “Show Hidden Albums”?

If that doesn’t help, can you search for one of the missing albums and post a screenshot of the album page here?

Thanks @P_Zwief and sorry for the trouble here. Appreciate your patience.

I’ll try to make a screenshot, but 1st I need to know how to access Roon from my windows pc when I run Roon headless from a linux machine (sonictransporter). Thanks.

Just install Roon on the Windows PC and choose to run as a remote during the initial run. 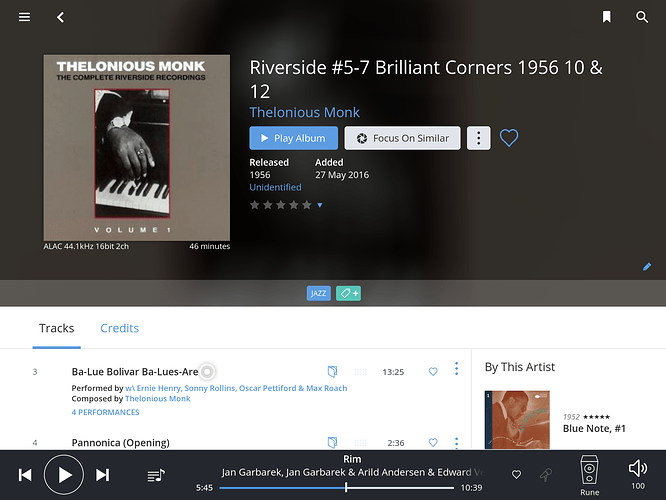 The albums still don’t show up under artist sort. But if I do a search for monk, they are all there.

Sorry for the back and forth, but this is pretty strange. Do you mind showing me where you’re expecting to see these albums?

Are you seeing more than one entry for Monk in the Artist browser?

How is your music directory structure set up for this album? It doesn’t look like it’s being identified at all. Maybe check this out.