Earlier today I added Electric Light Orchestra - A New World Record (CD Rip to FLAC) to my library. I went to the ELO artist page and that was the only album listed. But I know there were several albums already in the library. Went to the Albums view (sorted by Artist) and all the albums I expected were listed.

Clicking on an album “Discovery” and then on the artist link, I navigated back to the Artist view - where only a new world record was listed.

For some reason I decided to re-identify the Time album listed in the album view.

As you can see this was already the metadata already being used. But when I saved - the album was now listed on the Artist view, along view the album I added earlier.

But in further testing I added ELO II from Tidal, and this is now the only album on the Artist view.

I have not seen this happen on other artists. Hopefully you can help.

Clicking on an album “Discovery” and then on the artist link, I navigated back to the Artist view - where only a new world record was listed.

Can you post a screenshot of the Discovery album details screen?

Hopefully this is the one you are talking about - BTW the albums listed in “By This Artist” are the only ones listed if you click on the “Electric Light Orchestra” link. 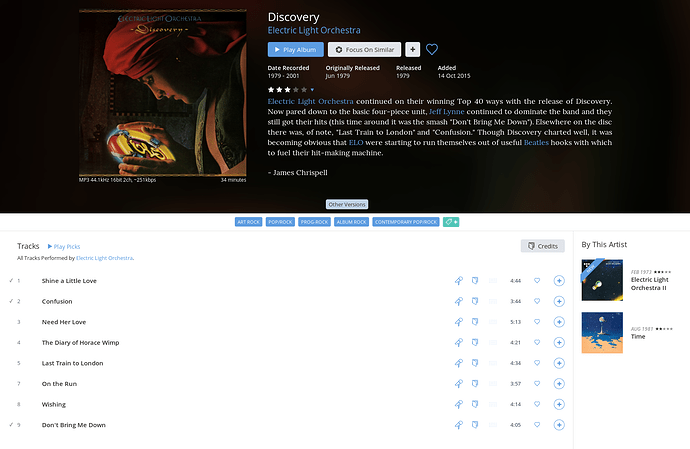 When you click the artist link on the Discovery album details page, you end up on ELO’s Artist page, and Discovery isn’t shown?

Yes, that’s exactly what happens. Today I found the following additional information, on the Artists view

When clicking either Artist it takes you to the same Artist View. There are 11 albums (10 compilations that include ELO and now one actual ELO album).

I am tempted to remove all the ELO albums and re-import?

I have been able to recreate the issue. Firstly I removed all albums by ELO from the library and cleaned library. Then checked ELO was not found. I then imported all the main albums from my collection with no issues, added and an album from Tidal - again no issues.

I did this twice and both times recreated the issue.

Hey @krjtx – I’m guessing this is something unique to your library, but I’d like to try an reproduce myself before we go down that route.

Can you let me know which albums are involved here? Let me know the names of the ELO albums (if they’re not in your screenshot above) and the compilation, and I’ll see if I can reproduce. If I can’t, we’ll get some more information about your database and content, and go from there.

Either way, we’ll get this resolved. Thanks for your patience! 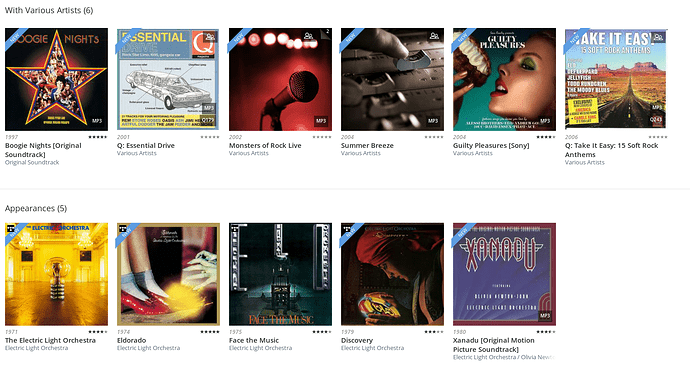 When I was testing the first compilation I added was the “Boogie Nights” soundtrack, this was the one that made all the main ELO albums disappear from the Artist page.

This is a current screenshot of the Albums view with a search on Electric Light Orchestra - as you can see more albums than are displayed on the Artist page.

Ok, I was hoping I could reproduce using my nearly identical collection of ELO, but I’m not seeing the same thing.

@vova is going to follow up and get some logs from you, so we can look at this closer using information from your collection. Stand by – we’ll be in touch, ok @krjtx?

We’re still looking at this @krjtx. The issue persists after a restart of Roon right?

Can you give me a little more information about how the albums are stored on disk? Each in their own folder?

@mike - responding to your questions:

so Yes - each album is it’s own folder, also they are split at a higher folder level into 'Lossless" and “mp3” - so if I have an album in both formats they are still in separate folder.

Compilation Albums are in a different folder where = Various Artists,