If albums come up as being unavailable is it worth waiting to see if they turn up of should I give it up as a bad job?
Tim

The only time, imho, that it makes sense is if it is on a drive or folder you sometimes disable, such as a drive(or folder)that contains seasonal muchh. During most of the year, the drive is disables, and any song on it shows as “unavailable”. In this case, forget about it. But usually, it means that those tracks have been deleted by Qobuz, or Tidal. This cab happen id the track is no longer licensed, or something about it changes, such as Tidal changing the track from regular 44.1/16 to some MQA file. In those cases, you can delete your track, then find the new version of that track.

Qobuz has a habit of prereleasing some albums to Roon, so that most tracks on the album will show up as unavailable until the official release date. 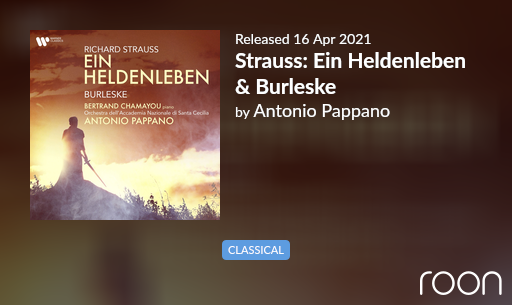 Only one track on this album can be played at the moment. The album will be officially released on the 7th May.

Sometimes going into the Qobuz app and removing then reinstating the heart will get Room to recognize the album again. I think it’s because something changed in the identifier Qobuz is providing to Roon.

Similar issue here but with one track from a 17 year old album. (Black Mahogani, Moodymann).
Track 4 is unavailable in Roon even though I can play it in Qobuz.

Is there something I can do?

Can’t even find that album in Roon by searching yet it’s in Qobuz app. I have an outstanding ticket on this issue that’s not had any replies from support in weeks.

Hi @support some update on the progress of this issue would be nice. Thanks

@support please can we get an update, more and more content is missing in Roon.

Search by Title I find it but looks like artist is spelt differently with a capital M, track 4 is unavailable though

Same behavior.
I guess this rules out a configuration or handling issue on my side.

Looks like Roon needs the full spelling on Moodymann to get a match. Lol. One letter off and it doesn’t list it at all.

Also often Qobuz is slow getting new releases on Roon. It sometimes does not appear until a couple of days after the album release date.

And even then it doesnt always until we give support a kick.

This is almost certainly a rights issue for that particular track. The Labels often restrict the rights of what can be streamed. Nothing that Qobuz can do about it.

But its available in Qobuz Geoff, just not in Roon.

Here you can see it track 4. 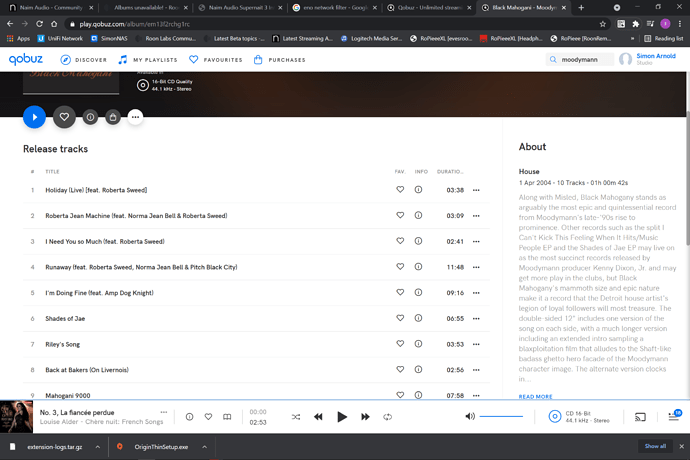 I just checked Roon again and its now available. 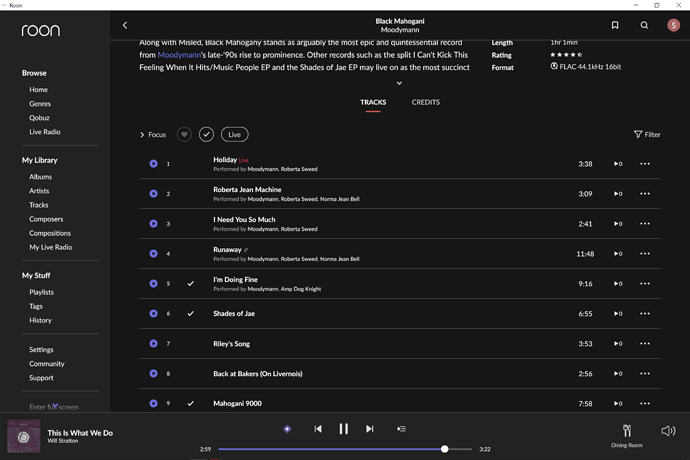 I just checked Roon again and its now available.

That’s an overnight update. I checked yesterday and track 4 was not available in the licensing info we had from Qobuz.

Thanx a lot for looking into this.