All tracks named the same for this album

When trying to identify this album - all tracks are named the same in the database. 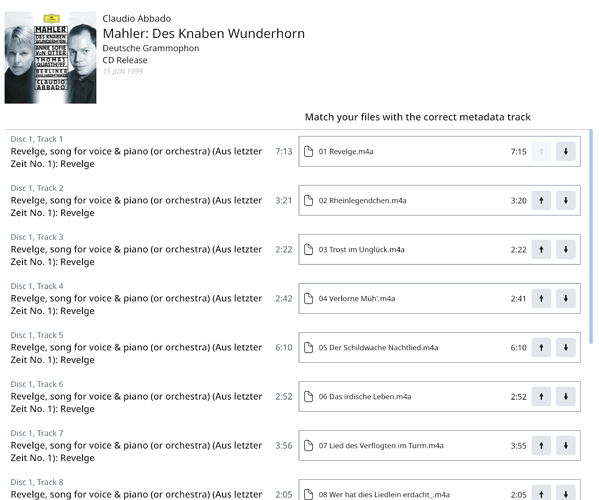 This is the album

I’m not familiar with that album, but Allmusic shows all songs as Revelege, yet if I look it up in Discogs, it looks completely different, which is right, seems odd all songs would be Revelege :

View credits, reviews, tracks and shop for the 1999 CD release of "Des Knaben Wunderhorn" on Discogs.

Only the first song is called Revelge

Correct in Discogs, incorrect on Allmusic. And since Roon uses Allmusic…

I have that album. I don’t know why but if you just identify as you have done above roon will name the tracks differently as expected.

However, it will not group and Identify the 12 (13?) parts as this canonical composition which you can then link to yours and your streaming suppliers versions:

If this is a rip or a download you will need to use WORK/PART tags to format it correctly.

If it is a Qobuz stream it’s a bit complicated but much to my surprise you can format it as well. There are a number of steps:

From the album view:

Next from the same view you must edit each track and replace each track title with [Work]: [Part]. So for example:

In the past this procedure didn’t usually work but it was always a bit hit and miss. So either it’s just luck with this album or there have been changes in preparation for 1.8 making it possible to edit multi-part works from streaming partners more consistently.

I don’t have TIDAL so I don’t know the exact procedure in that case but it is probably something very similar.

The alternative is to edit the relevant Musicbrainz entry (I have never been able to figure out how to use Musicbrainz). It will filter through to roon after a few days so everyone can benefit. Or you can ask roon to ask Rovi to fix it which takes considerably longer.